THIS IS THE LAMB OF GOD 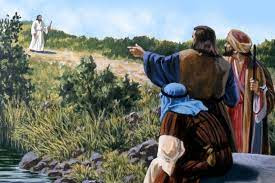 THIS IS THE LAMB OF GOD

The next day he saw Jesus coming toward him, and John said,

“BEHOLD, THE LAMB OF GOD, WHO TAKES AWAY THE SIN OF THE WORLD!

‘After me comes a man who ranks before me, because he was before me.’

31I myself did not know him, but for this purpose I came baptizing with water, that he might be revealed to Israel.”

“I saw the Spirit descend from heaven like a dove, and it remained on him.

33I myself did not know him, but he who sent me to baptize with water said to me,

‘HE ON WHOM YOU SEE THE SPIRIT DESCEND AND REMAIN, THIS IS HE WHO BAPTIZES WITH THE HOLY SPIRIT.’

34And I have seen and have borne witness that this is the Son of God.”

This version of the baptism of Lord JESUS, and the testimony of his relative, John the Baptist; is unique in this gospel, because the event seems to have happened before the actual baptism of our Lord and not after, like in the synoptics, and if this assumption is correct, it would throw light into the amount of knowledge John had before he baptized Jesus, about his own mission and our Lord’s identity.

But regardless, John acknowledged publicly and without delay that JESUS was the Messiah who had come to give his own life for the atonement of the sins of all humanity, which indicates, regardless whether this scene happened before or after Jesus’s baptism, that the Baptist had a very clear idea of the redemptive mission of the Messiah, whoever he was.

This knowledge, John the Baptist reveals, was prepared for him even before he met Jesus in person, so that when they eventually meet, John just would recognize the Messiah by the sign of the Holy Spirit over Him, and that JESUS was the promised Messiah from the Torah and the Prophets.

Finally, John the Baptist also mentioned that Jesus was the Son of God, and that Jesus would impart the Spirit of GOD over those who believed in Him.

This knowledge, impossible to obtain by a common man, unless he or she hear it from Jesus himself, or someone close to Him, is also a divine sign of God’s approval of John the Baptist’s ministry, which at the same time, approved Jesus public ministry and mission.