THE VISIT OF THE MAGI 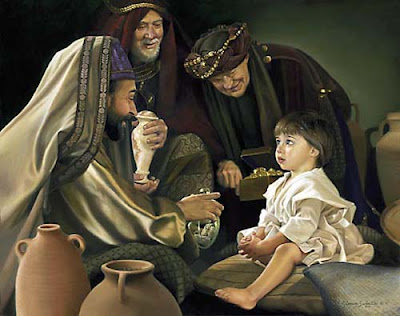 THE MAGI COME LOOKING FOR JESUS

1Now after Jesus was born in Bethlehem of Judea in the days of Herod the king, behold, wise men from the east came to Jerusalem, 2saying,

“Where is he who has been born king of the Jews? For we saw his star when it rose and have come to worship him.”

3When Herod the king heard this, he was troubled, and all Jerusalem with him; 4and assembling all the chief priests and scribes of the people, he inquired of them where the Christ was to be born. 5They told him, “In Bethlehem of Judea, for so it is written by the prophet:

6“‘AND YOU, O BETHLEHEM, IN THE LAND OF JUDAH, ARE BY NO MEANS LEAST AMONG THE RULERS OF JUDAH; FOR FROM YOU SHALL COME A RULER WHO WILL SHEPHERD MY PEOPLE ISRAEL.’”

(Micah 5:2, from paraphrased or lost translation)

7Then Herod summoned the wise men secretly and ascertained from them what time the star had appeared. 8And he sent them to Bethlehem, saying,

“Go and search diligently for the child, and when you have found him, bring me word, that I too may come and worship him.”

9After listening to the king, they went on their way. And behold, the star that they had seen when it rose went before them until it came to rest over the place where the child was.

10When they saw the star, they rejoiced exceedingly with great joy. 11And going into the house, they saw the child with Mary his mother, and they fell down and worshiped him.

Then, opening their treasures, they offered him gifts, gold and frankincense and myrrh.

12And being warned in a dream not to return to Herod, they departed to their own country by another way.

The Bible does not say where these ‘Magi’ were from, or how many they were, but only that they came from the East side of Jerusalem.

Judging by the name ‘ΜΆΓΟΙ’, or ‘MAGI’ or ‘MAGUS’, commonly pronounced as ‘MAGICIAN’, and the location given by the Scriptures, they could only be from the priestly class of the ZOROASTRIAN religion of IRAN.

The ZOROASTRIANS were a religion established by an Iranian religious leader call ZARATUSTRA or ZOROASTER in the year 500 BC, and held a religious view similar to the Abrahamic religion. The priests of this faith were the only ones called MAGI in the whole world.

It seems that GOD’S glory became manifested all over the world, since these Magi, experienced on the Jewish Scriptures from their own interests, and from the Hebrew influence during the Babylonian captivity in this part of the world, knew about the Jewish Messiah, and while observing the stars as they did normally, the STAR of JESUS became visible to them, guiding them to Him.

These religious men must have become closer to GOD through observing natural righteous life and faith, and for that reason they were chosen by GOD ALMIGHTY to come to know the incarnated GOD in JESUS.

They must have come from a very long distance. Maybe even from the border with India, because from the time they saw the STAR, until Herod found out that they were not coming back to him, nearly 2 years had passed (Matthew 2:16).

But GOD guided them to the feet of his only begotten Son, who they found already established in a home, with his parents. And they gave Him probably many presents, among them, GOLD, FRANKINCENSE and MYRRH, a typical gift presented to a King, besides the symbolic meaning saints have given to these elements.

GOLD, to acknowledge his royal power.

FRANKINCENSE, the perfume offered to the sacred, acknowledging JESUS as the MESSIAH.

They were warned though, not to reveal JESUS location to Herod, and went back to their country in secret.

In this occasion, the mercy of GOD was manifested to all men, and maybe there were more than just these Magi, because as the Scripture says:

“YHWH is near to all who call on him”

Even though many legends were created in people’s imaginations about these righteous men, one thing is certain, they met GOD face to face, and that must have changed them forever. These men came pagan, and returned Christians, to preach the news of JESUS to the far lands of the East.