THE PLACE OF LOGIC IN THE STUDY OF SCRIPTURES 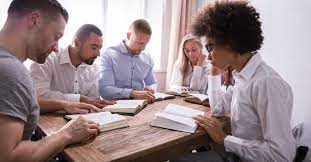 THE PLACE OF LOGIC IN THE STUDY OF SCRIPTURE

All theologians are familiar with the place of human reasoning in the systematic analysis of the sources of revelation, in order to produce a thematic theological menu with the least of errors possible.

And among human reasoning, the place of Logic as a disciplinary field, it is especially important.

It is the science that studies correct reasoning, conducted according to strict principles of validity.

This is primordial in the study of sacred texts and theological theories, since it provides the assurance that an idea or a thesis can be assessed correctly and from an impartial point of view, rather than leaning towards pre-conceived ideas or our personal imagination.

This must be learned prior to biblical analysis, to avoid corruption in interpretation of the texts, since most people are incline to perceive only what they would like to see, either pass beyond, or less, of what it is expressed on the texts.

AFTER THE PARSING OF THE TEXT

After providing a detailed description of what a dissected phrase or paragraph says, grammatically, the actual meaning is submerged into the eventual context when it happened, considering the value of those words and expressions at the time they were written and at the time they were pronounced, which generally are different.

All of this, must be placed then within the correct moment in History, to see any possible references that could surpass the simple literalistic meaning, and could be clearly referring to some other point, assumed to be known by the reader of the time.

Finally, these two results, must be placed within the Systematic analysis of the whole dispensational period, and secondly, within the whole Bible world view. ONLY THEN, we can harvest the true meaning of a passage.

A simple example could be the declaration in

“An elder must be blameless, faithful to his wife, a man whose children believe and are not open to the charge of being wild and disobedient.”

To understand what Paul is referring here when he says ‘Faithful to his wife’, we must do a linguistic, logical and contextual study of the phrase.

The closer text to the original language says:

“HUSBAND OF ONE WIFE” and not

‘Faithful to his wife’.

With this we find that the NIV translation is not a literal translation, but an ‘interpretative translation’ and does not fit the original text.

Now we have three words in place

ΓΥΝΑΙΚὸΣ: Translated as ‘wife’, but the literal meaning is more neutral. It means simply ‘woman’ and could be also translated as wife, bride, lady or woman, depending according to the context.

In this case is a Genitive Noun, Third person, Female, Singular.

In relation to the next word, we will know is referring to ONE WIFE (FEMALE), not just a sexual partner, or same sex partner, according to the meaning given to the word at the time.

ἀΝΉΡ: Translated as ‘Husband’, in relation to the word ‘Gynaikos’ (Woman), here too the literal meaning of the word is only ‘man’, which can be translated as man, husband, or male.

It is a Nominative Noun, Masculine, Singular.

ΜΙᾶΣ: Finally, we have an adjective from the word εἷς, which in this case it’s a Singular Feminine, Genitive Adjective, which means simply ‘one or unity’.

Comparing the three words, we have the literal translation of:

‘Man from one woman’

Which in interpretative form it could be translated as:

‘Husband of one wife’

Having studied the phrase, we can collect ideas with the possible meaning of this expression.

There could be three possible meanings:

A – That a husband should be faithful to his wife.

B – That the husband should be married to only one wife, which would imply that first century Christians practiced polygamy.

C – That a husband should not be in his second nuptials, either through divorce or widowhood.

4 – STUDYNG THE IDEAS ACCORDING TO THE HISTORICAL CONTEXT

Having these three possibilities, we should check what historical records report about them:

A – FAITHFUL TO HIS WIFE

Marital fidelity has always been a part of God’s desire for humankind. From the Torah to the NT, the Bible has always been against promiscuity, especially adultery, whose sentence was according to Moses, death.

So, faithfulness to one’s wife could be a real possibility, but to say this would be to imply that there were rampant adulterous relationships among first century Christians, which could force Paul to make this point.

It would be like saying, ‘get upset and don’t kill your brother, but forgive him.’ A very unlikely observation for Christians who should know that nothing justifies murder.

Some have argued that since Jews were allowed multiple marriages, therefore the early Christians also were polygamous, specially since nothing in the NT seems to openly forbid polygamy.

However, according to History, one of the differences between Christians and Jews, were their high moral standards, in comparison with the legal ‘justice’ of Temple Judaism.

In Judaism, adultery was forbidden, but not fornication; while in Christianity, adultery, fornication and even looking at someone with sexual desire was rejected as impurity. And one of this impurities was multiple marriages.

According to the writings of Justin Martyr, a Christian hero of the year 100-150CE, he wrote to Trypho, a Jewish contender, that the Jews demonstrated to be carnal in comparison with Christians since they allowed polygamy, and Christians worried more about things of the spirit. And so did other ancient writers as Tertullian and Eusebius of Caesarea (1)

There is not a single mention in history of multiple marriages among Christians, neither from secular or church records or councils, while there is a lot of evidence about Jewish plural marriages.

Finally, even though the NT does not forbid openly plural marriage, in fact its silence could be the opposite. That it is not mentioned because nobody practiced polygamy among Christians, while other things, fornication, adultery, sodomy, prostitution and slavery are mentioned because they were everyday problems. Also, all teachings about marriage in the NT, use only as reference to a couple of a man and a woman, not a man and multiple women, like Paul recommendation that

Therefore, this argument is very unlikely.

This possibility argues that a minister should worry more about the things of God than his own life, and therefore, live a holy life as an example, and for that reason, only successful married men, not divorced, should be ordained, to serve as an example of marriage to his community, and not an example of a broken marriage.

And in case of becoming a widower, it would be preferable to remain single than to supply for the desires of the flesh.

This possibility has echo in the way of life and ideas of the first century, especially since even Paul says that is better to be single than married (1Corinthians 7:8), and remarriage for women over 60 was forbidden, and Paul here also uses the same expression, ‘wife of one man’ for widows (1Timothy 5:9).

The final conclusion of this study would be that Paul desired the men who aspired to be a Minister of the Gospel, to be mature and spiritual enough as to be able to maintain one marriage all his life, and once a widower, to remain like that, worrying about his work for GOD instead on his own comfort.

This possibility, even though it still just a theory, it is the most probable one in understanding Paul’s words in Titus 1:6.

LOGIC BEHIND IT ALL

Nevertheless, behind all this process, Logic was the main element necessary to arrive to this conclusion. It is through correct application of Logical principles that the grammatical as well as the consultation of historical sources was done correctly, so that a logical result can be achieved, and not a wrong conclusion:

Indeed, God’s revelation can be understood by anyone with an honest heart, in faith and prayer.

When Lord JESUS spoke, He spoke for everyone and not just for the learned, however the WORD OF GOD has different levels of significance, even some not perceived by us, because it is designed to speak and touch even the most developed of God’s creatures, not just humans.

It becomes the responsibility of the spiritual leaders, to apply Logic on their own study of Scriptures, the same way it is applied by Theologians in their scriptural research, and teach the necessity of this scientific discipline to their congregations, so that the Christian communities around the world, can also make use of logical study in the measure of his possibilities.