THE LEVEL OF PROTESTANT EDUCATION 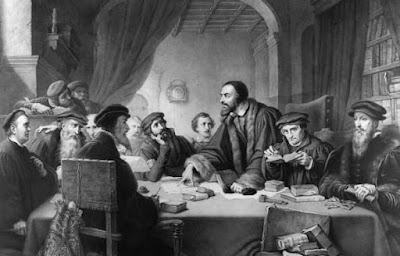 THE LEVEL OF PROTESTANT EDUCATION

Some times we hear non-protestant people rejecting Reform exegesis, arguing about the level of academic formation among Protestant clergy in general, and specially, disenchanted by the varied ideas of different confessions and the level of presentation of some of the free-lance reformed churches, which in North-American Spanish slang are called ‘Changarros’.

Despite the fact that a variety of ideas exists across protestant circles, and also that some free-lance ‘protestants’ (If indeed they can be called like that some of them) meet up in private garages and in sheds, the truth is that this is not related to the level of education of Protestantism as such, but it is related to its Ecclesiology.

LEVEL OF EDUCATION IN PROTESTANTISM

It is overlooked the fact that Protestantism was the engine that promoted education, specially on biblical disciplines, which were forbidden to the public and reserved only for the ordained hermetic clergy of the established Church during the time of the Reformation (1)

Since then, many centers of learning have been established, so that most of the most prestigious universities in the world are of Protestant theology, and form theologically every year, new Reformed Protestant Ministers.

Some of these centers of learning are:

THE FORMATION OF THE PROTESTANT GLERGY

For a regular Protestant Minister to be admitted to ordination, he must have completed and passed a Bachelor’s degree theological formation, that includes all biblical subjects, in general terms, like Theology I to IV, Ecclesiology, Hermeneutics, Eschatology, History, Greek, Hebrew, sometimes Aramaic, sometimes also Latin, Psychology, Education, Social Sciences, and apart from that, an elective, but recommended to be full study of, each book of the Bible, in local as well as in original language, theologically and linguistically, apart from Sacraments and Clergy formation, which it is separate to Theology. And two subjects of Philosophy, prior to study Theology to sharpen the minds of the students.

All this process takes a full 4 years formation, which varies with the 7 years formation of the Roman clergy only in the compulsory 3 extra units of Philosophy, Church Law and Catholic Tradition, which elevates their formation to seven years, but never on theological subjects which are the same for both of them.

Since the opportunity for free and open investigation started with the Reformation, thousands started to revise and investigate by themselves what otherwise they inherited and accepted blindly, even the ‘canonical’ Canon of Scripture, which in Reformed Christianity, does not respond, as most Catholics would like to believe, to the version ‘inherited’ from the Roman Church, but it was established by the revision and own translations of the direct manuscripts, in Greek, Hebrew and Aramaic, and the common acceptance, renewed and instructed of the 66 books (39 in the OT and 27 in the NT) that came to conform the PROTESTANT CANON, since 1522; and revised and approved again and again by multiple Reform church synods of all tendencies.

It must be also be said that from the THREE BASIC UNCIAL CODICES, (The ‘original’ versions of the Bible), two are in protestant hands, THE CODEX SINAITICUS AND ALEXANDRINUS, at the ANGLICAN BRITISH LIBRARY, and only the CODEX VATICANUS, is in Catholic hands.

The existence of a variety of theological ideas among Protestants in comparison not only to Roman Catholicism, but also to Orthodoxy, Mormonism and Jehova’s Witnesses, are indeed an important point to address.

This has two origins, one theological and the other, social.

Since Protestantism claims only to be subjected to Scripture alone (Not that only reads Scripture, but that only Scripture has supreme authority, even over Tradition, which is studied under History in Protestant colleges). All doctrinal claims can only relate to the written canonical texts.

Since the Bible itself is not a systematic theological book, but a collection of free writing material, many of our questions are not answered by Scripture alone, provoking thus, a variety of theories over many points that are not clearly taught in detail on Scripture.

Since the Scripture leaves a lot of obscure gaps on doctrinal information (Example: To what was referring 1Timothy 3:2 when it says ‘The Presbyter should be husband to only one wife’?), it is natural for social groups, since no two men are exactly the same, to hold different opinion of one subject.

REGARDLESS, doctrinally, and in this we all agree, we profess salvation through Faith in JESUS alone, and not in works or creeds. IT is enough for a Christian to truly believe and submit to JESUS OF NAZARETH, as the Messiah and the Son of God, and to remain faithful to Him to the end, to be saved. Not how ‘good’ he or she is, or how well he understands a creed.

THE UNITY IN CATHOLIC CIRCLES

It is understood then, that in other circles, not only Roman Catholic, but also Orthodox and sects like Mormonism, Jehova’s Witnesses and Seventh Day Adventism, the doctrinal unity surpasses the doctrinal unity in Protestantism, because they fill the scriptural gaps with extra biblical ideas.

Mormonism with the Book of Mormon and Doctrines and Covenants, Seventh Day Adventism with Helen White’s books, Jehova’s Witnesses with the Watchtower and Perspicacity from the Scriptures, and Orthodoxy with Ecumenical Councils definitions, like the Roman Church, who also must add Papal Bulls and Ex-Cathedra declarations.

Considering that all of them hold to a 100% solid doctrinal unity and nevertheless they all believe opposite doctrines, we can only conclude that unity by itself, it is not a synonymous of truth.

These are RESTAURATIONIST movements. That is, they believe themselves to be the ONLY TRUE CHURCH on the planet, and reject Protestants as they reject Catholics.

Protestantism does not support neither conforms to these movements.

2 – There are Free-Lance churches. That is, some people organize themselves into groups to worship GOD without any formal theological education, and in not proper places of worship.

These are IRREGULARITIES, and even though their leaders can be respected as ‘Pastors’ if that is what their community considers them to be, they are not doing, neither complying to the basic levels of Protestant Ministry, and will be therefore, found faulty academically. But this is not the rule in Reformed Christianity.