THE SHEPHERDS COME TO SEE JESUS 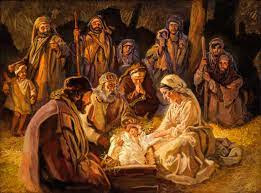 THE SHEPHERDS ARRIVE TO SEE JESUS

15When the angels went away from them into heaven, the shepherds said to one another, “Let us go over to Bethlehem and see this thing that has happened, which the Lord has made known to us.”

16And they went with haste and found Mary and Joseph, and the baby lying in a manger.

17And when they saw it, they made known the saying that had been told them concerning this child. 18And all who heard it wondered at what the shepherds told them. 19But Mary treasured up all these things, pondering them in her heart.

20And the shepherds returned, glorifying and praising God for all they had heard and seen, as it had been told them.

21And at the end of eight days, when he was circumcised, he was called Jesus, the name given by the angel before he was conceived in the womb.

Luke makes a highlight here of the reinforced faith displayed by the shepherds, the surprise of the new to the gospel, and the total faith worthy of praise and imitation of St Mary, the mother of our Lord JESUS. That is the intention why this narrative was written in so much detail.

Taking into consideration all that is written about them in this gospel, it is clear that for their reaction, they were regular Jewish believers, and not unbelieving people. They were surprised at the sight of angels speaking to them, but they did not doubt their existence, or resisted to the message, but acknowledge the revelation as coming from ‘The Lord’, and the angels themselves call them ‘Those of whom He is well pleased’ (Luke 2:9-10,14-15).

After they confirmed their trust in God, they went back joyfully, praising God for the things ‘they had heard and seen, as it had been told them’. They represent those people who have a simple faith, but respond positively to God’s manifestation, increasing in faith and devotion.

The second human group is the one represented by those present, who even though they were not the first recipients of the revelation given to the Shepherds, they were chosen to listen directly from their testimony, and will react in different ways. Some will believe their declarations, and some will not.

The best example represented in the attitude of Mary, the mother of our Lord.

Even though she represents the generation of the chosen ones by God, to serve Him in special tasks, Mary displays total obedience to the Will of God.

Even though she was aware of the reality of the special child she just gave birth, and that He was literally the ‘SON OF GOD’, since He had been conceived without a human father, but by the power of God directly; Mary accepted her call, but she did not understand, neither knew all the events and things this mission entailed. But she accepted it by faith alone, trusting in the Wisdom of God who is the one who called her to her mission.

Under this positive disposition, Mary listened all what the shepherds said, and meditated about them in her mind, wondering in the meaning and immensity of the mission her son was meant to have in this world and the universe (Luke 2:19).

ALL THESE THREE GROUPS, represent the people of the Gospel.

Mary did not believe, she ‘KNEW’ JESUS was the Son of God, and served GOD and her own Son as such. With the attitude of a pious servant, and with the love of a mother.

THE SHEPHERDS, represent the Apostles, who having a basic initial faith in GOD YHWH, they reacted positively to the revelation that GOD, granted to them, and became witnesses of the divine message to the world. They were simple people, going about their daily work, when suddenly their election became manifested when the saw the angelic vision, very much like it happened to the 12 apostles of Lord JESUS.

BUT IN ALL THOSE cases, whether chosen as a prophet, or a shepherd or a simple listener, they all had something that GOD our Maker gave us, and that is impossible to lose, and is a prerogative of the human race. They all had their FREE WILL.

From St Mary, through the Shepherds, until the listeners, they all had their free will, and the opportunity to accept or reject what they were listening.

The same way the shepherds chose to follow their conscience and not disdain and forgot the angels and their message.

The same way St Mary, had the opportunity to accept or reject her call, and she chose to accept it, and accept it to the end of her life.

The same way the people there listening to the shepherds, had the opportunity to accept or reject their testimony; they all, had a choice.