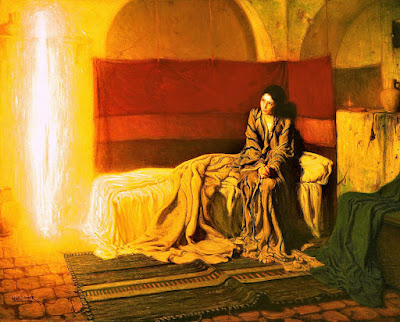 ST MARY THE MOTHER OF JESUS

Little is spoken of Mary, the mother of our Lord JESUS OF NAZARETH, in Reformed circles, mainly as a preventive reaction to Medieval Mariological theories that have stayed in the collective minds of the faithful.

The simple mention of Mary causes negative attention in the faithful, but we must realize that since JESUS is ours, also is all his history, in which are included his terrestrial parents, MARY AND JOSEPH. We must also learn from their examples, so much from their persons, as well as from the circumstances that surrounded their ministry, without fear or agenda.

However, from the BIBLE ALONE, we can gather the following information:

Most women were and are given in marriage in the middle east at that age, unless there is an extra factor that may alter that procedure.

In Mary’s life however, there is not biblical reference to think she lived an unusual life, so the idea of being from 12 to 19 years old is the most favored one (Ezekiel 16:6-8)(1).

John the Baptist, being into a lesser ministry in importance than Mary and Joseph, was chosen before his birth, and was filled with the Holy Spirit in his mother’s womb, which indicates that he also had the Original Sin removed from him before he was born.

So, by logical theological deduction, we can conclude that Mary also and with more reason, was elected and prepared to carry and nurture the Son of God, even from before the world was made; and also infused forever with the Holy Spirit in her soul. And as a person with the HOLY SPIRIT, she must have remained holy all her life (Luke 1:15; Ephesians 1:4)

Even though she was chosen and prepared for the role GOD assigned to her, GOD never forces a person to do anything at all.

Mary was invited to accept the role Gabriel described to her. But she agreed to it freely. Thus, Mary demonstrated that she was a servant of YHWH, and more than happy to do His Will, despite her not understanding her role in detail and fully.

Mary remained faithful to the end of her life, by Grace and of her own free will (Luke 1:38).

The role to be the mother of God incarnated is an event that is unique in all the history of the universe. It had never happened before, and it will never happen again. And from all creatures that ever existed and will exist, in Heaven and on Earth, and in all dimensions and levels, only the human being MIRIAM OR NAZAREHT, was chosen to carry God’s Son in her womb.

BUT NOT ONLY THIS.

The humanity of JESUS took from Mary’s DNA, so that there was a physical union between the humanity of Lord JESUS and her human mother, Mary. These genes, got glorified in Christ when He ascended to Glory for all eternity.

NOBODY in History had or will have that honor.

5 – SHE WAS PROBABLY ASCENDED TO HEAVEN.

God has resurrected and taken to Heaven many humans of lesser status than his own mother.

Since Mary nurtured JESUS during his infancy, and remained faithful to Him until the end of her life, it is only fitting that the woman whose DNA our Lord carried, may have also been spared the decay of death, and resurrected and ascended to Heaven in a glorious state for eternity. Definitely she is not alone in this blessing, but also all those who resurrected after our Lord resurrected, and probably Joseph, John the apostle, and all those whom Jesus resurrected in this world, like Lazarus, Jairo’s daughter, and the son of the widow.

The point to know these things is not to deviate into idolatrous practices or in medieval errors, but in considering the extend of the work of God in relation to the mechanics of salvation.

Certainly, much more can be said of St Mary the mother of our Lord, but these are some of the most important points of her human life, and learn how much God loves us, how powerful He is, and how great is the reward in Glory for all those who remain faithful to Him until the end.

Thank you, Heavenly Father, for your love.