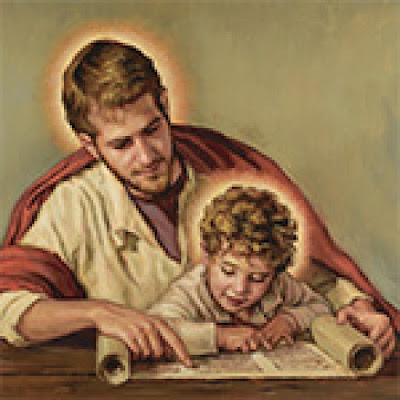 ST JOSEPH THE FATHER OF JESUS

Contrary to the reaction that speaking about St Mary causes in reformed circles, that is not the case when people speak of St Joseph, the earthly father of our Lord JESUS CHRIST.

And this is not because medieval legends may not have been built around his figure, but because the information we have about him, through Scripture and History is extremely brief, not even enough to capture the attention of the inventors of ‘tradition’.

But as brief as it may be, it is good to single out these particulars, and learn from them, because God’s work was also present in him, and everything God does, it is holy and positive for ourselves.

What we can gather from the BIBLE ALONE, about Joseph of Nazareth are these things:

1 – JOSEPH WAS OF ROYAL LINEAGE

יוסף or YOSEF, or commonly in his Greek form Ἰωσήφ, JOSEPH, is said in the NT to be a descendant of King DAVID (Matthew 1:6, 16, 20; Luke 1:32), which made Lord JESUS according to lineage, a man with rights to the Crown of ISRAEL, as well as from his mother Mary, a descendant of AARON, with rights to offer sacrifice in the Temple for the people as priest (Luke 1:5,36).

2 – JOSEPH WAS A CHOSEN MAN

As with all other prophets and servants of God, granted a lesser ministry in importance, Joseph also must necessarily be chosen and sanctified from the beginning of the world for his sacred mission, to look after, in maintenance and well being (Housing, food, protection) our Lord Jesus while He was an infant, and his holy mother.

Most probably as well, being filled with the Holy Spirit from before birth (Luke 1:15), specially because God would not have made a humiliating difference in treatment between his mother and earthly father. The only extra blessings that made Mary special in comparison with Joseph, were not because GOD refuse them to Joseph, leaving him aside like a lesser tool, but because Mary, as a woman, participated in blessings a man cannot, like being the mother of a child and share her DNA with Him.

As a consequence, Joseph must have been a holy man all his life (Matthew 1:19).

3 – JOSEPH WAS SELF SUFFICIENT

Joseph demonstrated to be an able man to keep a family, and able physical man to protect them.

Joseph took Mary as his wife early at the time of the betrothal (Matthew 1:24), knowing that she was pregnant with our Lord, and at the night month, she gave birth while traveling for the Roman Census, and two years later, the whole Holy Family ran away to Egypt from Herod (Matthew 2:13; Luke 2:1-4).

All this indicates beyond doubt that Joseph was a man with financial means, able to survive without working for a time, while supporting himself, Mary and baby Jesus.

This also proves that he was much older than Mary, who was probably not older than 18 years old, to be a sociable established man, BUT also not 100 years old like medieval legends supposed, since such an old man would not sustain long travels, escape, or will be able to fight to protect the Holy Family from robbers and criminals. My personal opinion is that he must have been around his 30’s, an average age at the time, when most people did not pass the 50’s.

3 – JOSEPH WAS PROBABLY A WIDOWER

Apart from the obvious suggestion from Matthew 1:25, that says that Joseph ‘Did not know’ Mary until she gave birth to her child (Jesus), which could be possible, and that our Lord’s brethren are a product of this union, however there are details that do not match points given in Scripture.

A – Betrothal was normally in a single couple, from 9 to 12 months, to prove the virginity of the bride, without the medieval way to prove it, which was embarrassing for eastern society.

If the bride had committed adultery, the fruit of her crime would be visible before the betrothal was over, and the woman, if not impregnated by her husband, would be stoned to death as adulterous (Deuteronomy 22:22) (1).

BUT if one of the people to get married was a widow or widower, the betrothal time would be reduced to 30 days, given the urgency to take over pre-established family duties. It seems to be by the narrative of Matthew 1:24, that this was the case with Joseph.

B - That will also indicate why our Lord’s brethren did not believe in his messianic claim in the beginning, but only from the time of this resurrection (Mark 3:21; John 7:5), because if they would have been born from a believing couple like Joseph and Mary, they would have been educated in Jesus being the Son of God, and would have looked up at his older brother as an example to follow. Instead, it seems to be that they were older than Jesus and never believed in the virginal conception of St Mary, and assumed Jesus to be mad.

As mysteriously as Joseph comes into play in the gospels of Matthew and Luke, he also disappears early, while the other gospels do not mention him at all. It is very unlikely that either St Mary of St Joseph died of sickness. That would be dishonorable to the Son of God. But probably died of old age, proving this that he was much older than Mary.

He definitely is dead by the time of Jesus’s crucifixion, who having no father or believing brethren to look after his mother, He lives her to his beloved disciple John (John 19:27).

5 – JOSEPH WAS PROBABLY TAKEN TO HEAVEN

The Son of God is perfect in all his ways, and we know that He is just and generous in everything He does.

Having granted the gift of premature resurrection to many others, like the saints that rose up with Him in his resurrection, and were taken to glory, or also Lazarus, Jairo’s daughter or the son of they Nain widow, and probably Apostol John (Matthew 27:52-53); Jesus also must have granted this grace to Joseph and Mary, because both of them fed, protected, and raise Jesus up, not just his mother. So, in order to honor the couple that protected Him during his birth and infancy, Lord JESUS must have granted to them this gift or a premature resurrection and glorification, because He can.

Also, we reject the idea that only Mary was taken to Glory while Joseph was left to rot as useless. Far from the Son of GOD such an evil idea. Lord JESUS in his perfect Justice knew his human life was equally given in care to both, Mary and Joseph, so they shared in their reward.

Since it was a father’s job, humanly speaking, it was Joseph who instructed child Jesus into reading of the Tanakh, prayers, and Temple service in general, as well as in the synagogue, where he must have accompanied Jesus for the first time.

He also taught Jesus his trade. The Bible does not specify what was really Joseph’s trade. The idea that he was a carpenter is a tradition, but he was a trades man, and a very successful one for the details of his life. He must have, as all father do, taught our Lord to make a living doing the same things he knew.

Not much can be said of St Joseph, but mostly lessons many can be gathered from his example of living.

He was a normal human, but who believed God and the Scriptures deeply, and accepted freely the mission God had given him, passing to history almost left aside, while forgetting, that, humanly speaking, neither St Mary or Lord Jesus could have survived without Joseph.

It was Joseph to instructed out Lord Jesus in the faith and in his manual work. It was the labor of a man to do that. And Joseph did it all well.

He is really a hero to follow, and crucial to the process of salvation.