SHOULD WE TEACH OUR CHILDREN ABOUT SANTA CLAUS? 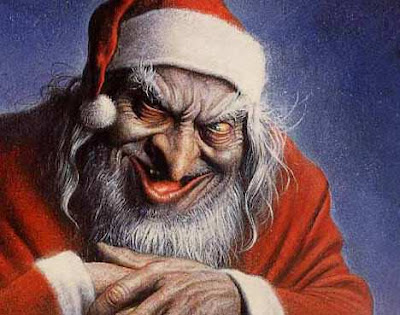 IS IT CONVENIENT FOR CHRISTIANS TO SPEAK OF SANTA CLAUS TO CHILDREN?

The image of this jolly fat old man dressed up in red, who comes supposedly during Christmas eve, from the north pole to deliver presents to obedient children, has become so popular around the globe, that it is literally impossible to find a place on Earth, even in non-Christian lands, where the Christmas season comes without this character, so much, that even Christians in good standing, and even on community level in churches, adults dress up in red to represent this character to their children in order to give them presents and make them happy during the 24th to the 25th of December, every year.

THOSE WHO THINK IT IS NOT BAD

The good Christians who argue that it is not bad, they consider the commercial SANTA CLAUS to be a modern representation of the Christian bishop SAINT NICHOLAS OF SMYRNA, from modern Turkey, who became famous for being a Confessor of the Christian Faith and used to feed homeless and poor children of his city during winter, and specially in Christmas, giving them little presents to enlighten their lives.

On top of this they say that there is nothing wrong in what they do, but just use this popular character in order to make their children happy and encourage them to have a better conduct, always and at all times, holding JESUS as the center of it all.

And above all, the Bible does not forbid it.

Even though these arguments are true and correct, there are facts that nobody can deny and that have become the cornerstone of those believers who not necessarily reject Christmas celebrations at all, but however reject SANTA’s character as wrong.

1 – SANTA CLAUS IS NOT SAINT NICHOLAS

Even though Santa Claus was inspired on the figure of St Nicholas, in reality it has nothing to do with him.

The modern character comes from a frozen pole, is extremely fat, is married and has elves (Demons) as helpers; while St Nicholas lived in a warm area in Turkey, was single, and lived a holy life away from demonic partners.

The FAT SANTA, gives presents to children in order to bribe them to be good, while ST NICHOLAS gave presents out of mercy to all children, good and bad.

The reality of this SANTA CLAUS is totally different in image and values to the Christian hero NICHOLAS OF SMYRNA.

The darkest side to this story is however, not so much of WHO this character is, but in WHAT it does.

Children, at least not from Christian parents, are taught to ‘PRAY’ to SANTA CLAUS to ask him for presents; or at least, to write him letters and then placed in red socks, for Santa to arrange the petition.

This way, little children believe the presents come from this fictitious character and not from their own parents or relatives, and that it is GOD who ultimately grants their petitions.

Instead of praying to GOD for what they want, they fall to idolatrous practices that try to give this lie a power that does not have, but even worse. AS IN ALL IDOLATRY, this ‘petitions and prayers’ are immediately taken over by demons, who position themselves in place of Santa to receive their prayers and love that they crave so much, turning this into a SATANIC PRACTICE.

The INNERRANT and INFALLIBLE WORD OF GOD, teaches:

“Be anxious for nothing, but in everything, by prayer and petition, with thanksgiving, present your requests to God.”

SANTA CLAUS feeds a fantasy that is at the same time, idolatrous, that takes away children’s faith and attention from God into a fantasy, and ultimately to satanic forces behind all types of idolatry.

A TRUE CHRISTIAN, should immediately and by principle reject this pagan practice; but for those who doubt, at least the fact that this fantastic character takes away the attention and gratitude of their children from even themselves, should be enough reason to reject this practice.