JOHN THE BAPTIST ANNOUNCES THE COMING OF JESUS 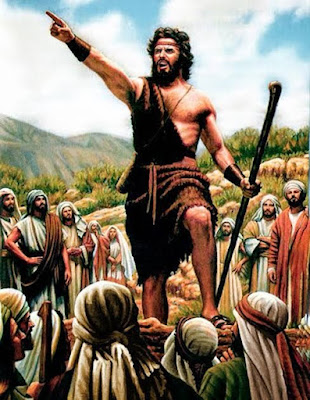 1In those days John the Baptist came preaching in the wilderness of Judea, 2“Repent, for the kingdom of heaven is at hand.”

3For this is he who was spoken of by the prophet Isaiah when he said,

“The voice of one crying in the wilderness:

‘Prepare the way of the Lord; make his paths straight.’”

4Now John wore a garment of camel’s hair and a leather belt around his waist, and his food was locusts and wild honey.

5Then Jerusalem and all Judea and all the region about the Jordan were going out to him, 6and they were baptized by him in the river Jordan, confessing their sins.

7But when he saw many of the Pharisees and Sadducees coming to his baptism, he said to them,

“You brood of vipers! Who warned you to flee from the wrath to come?

8Bear fruit in keeping with repentance.

9And do not presume to say to yourselves, ‘We have Abraham as our father,’ for I tell you, God is able from these stones to raise up children for Abraham.

10Even now the axe is laid to the root of the trees. Every tree therefore that does not bear good fruit is cut down and thrown into the fire.

11“I baptize you with water for repentance, but he who is coming after me is mightier than I, whose sandals I am not worthy to carry.

He will baptize you with the Holy Spirit and fire.

12His winnowing fork is in his hand, and he will clear his threshing floor and gather his wheat into the barn, but the chaff he will burn with unquenchable fire.”

John the Baptist was a relative of Jesus, presumed to be his cousin, since his mother, Elizabeth, was also a relative of Mary the mother of our Lord (Luke 1:36).

He was elected to be the precursor of Lord JESUS in his public ministry, that way, our Lord being announced for a few years before his public appearance and finally openly pointed out by John, would not have to start his own ministry from nothing, but people would be already aware of his coming.

Matthew applies to John the prophecy in Isaiah 40:3 which is part of a prophecy of restauration for Judea after the Babylonian captivity, announcing that the land should be prepared before the return of the Jews to Jerusalem, and this is exactly what John was doing, but not regarding the return of the people to the holy land, but before the coming of the Messiah to Judea.

Matthew also gives a brief description of the life style of John in the desert, wearing uncomfortable clothing and eating unpleasant food. It is a description of John’s devotion to God by performing his ministry in hard conditions, not as a deliberate act of ascetism, but as proof of the tenacity of his own faith in the performance of his divinely given mission despite the odds.

John announced the coming of the Messiah, and baptized the people in water by immersion, in a public performance of TEVILAH, or ritual full body immersion, which generally was done in a MIKVAH or ritually constructed pool, but in this occasion, by divine will, and as a prelude of the future departing from institutional Judaism, it was done in open air in the Jordan river. This shows unmistakably, that Christian baptism, inspired in the Jewish Tevilah, must be of full body immersion, done by responsible adults, and as a sign of repentance, as John’s baptism was, PLUS, the representing of the NEW BIRTH in Christ Jesus, which seals solemnly our pledge to God in Jesus for eternity.

John also warns those coming to receive baptism, to not just ‘profess’ repentance, but SHOW SIGNS OF REPENTANCE, which constitutes a true change of life. The same way, today’s profession of faith and repentance in Christ, mut be followed by true signs of conversion, otherwise it is invalid and the ‘profession of faith’ amounts to nothing (Matthew 7:21).

Finally, John announces the soon coming of the Messiah, whom he himself proclaims to be higher than him in everything, so much, that John does not considers himself to be worthy to touch HIS feet.

He announced that this Messiah, whom he later pointed openly to be JESUS OF NAZARETH (John 1:29), was coming with God’s power to distribute the HOLY SPIRIT on the people who will receive Him, as well as to condemn to eternal damnation those who refuse to listen to his call of repentance