A REFLECTION ON CALVINISM 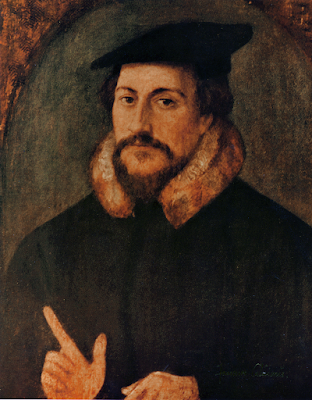 A REFLECTION ON CALVINISM

Everyone is badly surprise when they hear of the ultra-Calvinist position of ‘Double Predestination’. The doctrine that teaches that GOD deliberately created humans, some for eternal condemnation and some for eternal glory, in an indolent desire to produce gratitude in the hearts of the saved at the expense of the eternal and unspeakable suffering of the condemned, who without having asked to be born, were created for God’s own sick pleasure.

This doctrine is so detested that only little groups still hold to this sadistic doctrine.

However, Calvinism, based on the Augustinian view on Predestination, which is the most extended theological version on the planet among Christians, sustains a more lenient theological theory about Predestination and Election.

Mainstream Calvinism sustains that God did not intervene in Adam’s fall, and therefore, He did not desire, neither provoked the fall of humanity into sinfulness and its subsequent condemnation to the Lake of Fire.

Based on its T.U.L.I.P. acronym, Calvinism teaches that after the Fall, humanity is totally unable to listen to God, repent and even have faith, unless the person belongs to the group of the ‘Elect’, where faith, repentance, perseverance and final glorification are guaranteed by God, independently and above our own free will, so that only the Elect have the opportunity to be saved, a small number elected from the lot of humanity, while the non-elected are left behind, without hope of salvation.

Calvinism also teaches that in order to achieve salvation without possibility of failure, an irresistible Grace from God assists all the chosen ones to believe, repent and follow Christ to the end of their lives, which they call ‘The Perseverance of the Saints’.

This irresistible Grace is what guarantees our final salvation, despite all the temptations and demonic attacks we may suffered. That way a saved man, has absolutely nothing to add or take away, since also this divine grace preserves the Elect from fatally sinning, in order that absolutely nothing will be owed to the human being, but the Glory will be entirely GOD’s, who initiated, effectuated and culminated the work of salvation on the Elected.

THE PROBLEM OF FREE WILL

Even though at first instance this may seem more palatable than the alternative of a Double Predestination, it contains two deep theological contradictions not evident at a quick look.

1 – IT CONTRADICTS THE CHARACTER OF GOD.

JESUS, whom we all agree is God incarnated, or at least, for the Arians, that He is the Anointed One of God; all Christians agree that Jesus’s words as well as his actions, were all perfect and immaculate, and worthy to be followed and imitated.

If we believe that JESUS in his actions and words reflect God’s character in every way, then we all must agree that Jesus’s degree of mercy and consequential teachings about mercy and love, are according to God’s feelings and mercy.

It is impossible then, that the God that taught us to ‘love our neighbor as ourselves’ as narrated in the parables of the Good Samaritan, and of Lazarus and the Rich Man, where disdain and neglect are condemned as evil; would Himself act in such a cruel form of indolence and neglect, abandoning INTENTIONALLY millions of people to the eternal torment of Hell, having the power to save them; while only choosing a few to be rescued from eternal pain.

Besides the abhorrent feeling this attitude provokes by itself, this action is contradictory to the character of the God, Jesus projected, and therefore it is impossible that He could act the way Calvinism teaches.

But that is not the greatest contradiction.

By principle, if we reject that God created human beings with the deliberate intention that they may be condemned; we are accepting that Adam and Even had free will to accept or reject Satan’s proposal and that God had nothing to do with Adam’s final choice.

BUT, if we agree that humans, having their free will totally subjected to sin, are totally disabled to come back to God by themselves; then we are admitting the cancelation of human free will after all, or at least Calvinism does.

Therefore, if we accept John Calvin’s idea that humanity, been totally corrupted and hopeless, can ONLY come back to GOD, NOT ONLY through the gracious atoning sacrifice of Jesus, but ALSO through an Irresistible Grace that creates FAITH in us, moves us to REPENTANCE, SANTIFICATION, and makes sure we WILL PERSEVER to the very end, guaranteeing that way our unfailing salvation, then we are accepting that human participation is ‘0’, and that the whole process of salvation, from even before the world was created, is 100% God’s work, and none from us.

In other words, according to Calvinism, human salvation is imposed on humans, without previous consultation, and without the capacity of accepting it rejecting it, even to the point of making for the elect, impossible to fatally sin.

In Calvinism, the saved are a nation of robots, totally deprived of their free will.

But not only this.

Coming back to Adam and Eve. If we believe, as it was mentioned before, that Adam and Eve had free will and that God had nothing to do with their fall into sin; then, if the final result will be a nation of Saints totally deprived from their free will, saved by force; THEN, WHY DID GOD CREATE ADAM AND EVE WITH FREE WILL IN THE FIRST PLACE?

The whole pain of sinfulness in this life, is only understood as a result of an existing free will in humans, that even though it is damaged by sin, still preserves its own integrity, and that is what makes people personally responsible for their actions.

But if the result would be salvation by force, then it would have been better to create Adam and Eve without free will, since that would not alter the dignity of the Saints, having been saved by force.  The Calvinist necessity to save by force, without approval from the saved, totally makes the creation of free will unnecessary, and makes God a cruel deity that only created this contradiction to satisfy His own desire to see eternal suffering.

And even more, at the end, through the action of leaving most of humans to face eternal pain, out of his own desire, having the power to save them if He wanted, but refusing to do so, places GOD in the same rejected position of Double Predestination, from the moment He abandon intentionally the rejected to condemnation, knowing that they have not the smallest hope of salvation.

God desires, in Calvinism, the condemnation of the ones He refused to help.

Calvinism is a very logical theological building, based on strong pillars, and the intelligence of Rev John Calvin cannot be denied.

BUT, as with all human effort, it contains mistakes, because in his desire to finish the apex of its theological build up, it tries to fit by force, bricks that do not fit.

But the ones who know JESUS’ voice and mind, know what our LORD is like, and know that the TULIP Theological system does not fit God’s character at all, neither truths of biblical anthropology.

Adam and Eve were created with Free Will, and they could have said ‘NO’ to Satan’s temptation, but they didn’t.

After that, all humans are born cut off from God, but with their free will still independent from Sin. Damaged by sin, yes. Inclined to sin, yes. But incapable to chose good, NOT.

Humans still preserve their own free will, and are still in control of it, plus by the Grace of God, if a person desires to do good, he or she is assisted by God to do so, and eventually brought to the feet of Christ Jesus. But still, everything that we do, either to reject or accept JESUS’ gift of salvation, is entirely up to us, making every person responsible of their own destiny.

PERFECT FREE WILL, that was the intention of God when He created humans, and the reason WHY HE MADE US ACCORDING TO HIS LIKENESS.