JESUS SAVES THE THIEF ON THE CROSS 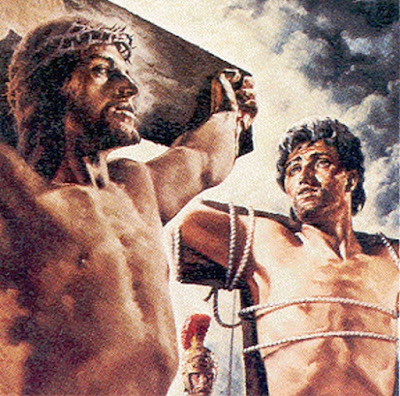 JESUS SAVES THE MAN ON THE CROSS

39One of the criminals who were hanged railed at him, saying,

“Are you not the Christ? Save yourself and us!”

40But the other rebuked him, saying,

“Do you not fear God, since you are under the same sentence of condemnation?

41And we indeed justly, for we are receiving the due reward of our deeds; but this man has done nothing wrong.”

“Jesus, remember me when you come into your kingdom.”

“Truly, I say to you, today you will be with me in paradise.”

Fulfilling to the end his ministry, our Lord JESUS who was sent not come to condemn the world but to save it (John 3:17), He accepted the last-minute repentance of one of the criminals crucified next to Him who moments before was also criticizing Him together with the unrepentant robber (Matthew 27:44)

Besides what old traditions say about this man, according to the Scripture he was a thief, and must have also committed murder, and murder of Roman soldiers. That is the reason why he was trialed by Pilate and condemned to the ultimate form of execution, death on a cross.

He must have converted when he saw Jesus praying for those who crucified Him (Luke 23:32-34), and realizing that Jesus was innocent and unjustly condemned, he tried to stop the abuse the other robber was delivering to our Lord constantly.

In his declaration, this repented criminal, it is clear that he accepted Jesus’s lordship and authority, that is why he said:

“Jesus, remember me when you come into your kingdom”

Our Lord JESUS CHRIST, seeing the faith and repentance of this man, He did not hold resentment towards him because he also had been abusing Him.

He did not hold against him that he had killed human beings, and neither that he was not baptized or that had even confessed his sins.

He professed his faith in Jesus publicly, repented of everything in his life away from God, most probably not even having time to reflect in all of it and the consequences, but he was sorry.

Without Jesus giving him a formal absolution, nevertheless He let him know he was forgiven, and that He will save him, when He said:

“YOU WILL BE WITH ME IN PARADISE”

The same way Lord JESUS, the King, saves today anyone who confesses faith in Him and repents of his sinful life and submits to Him as his Lord and Savior.

Because HE is the savior, not rituals or ceremonies, that only make sense after we are accepted by Him and never before.