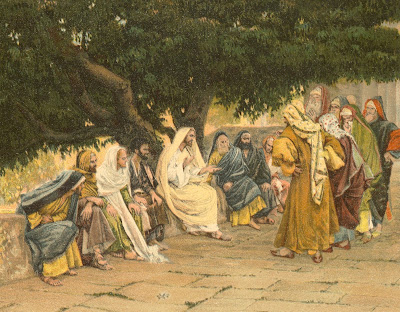 THE RESURRECTION OF THE DEAD

27There came to him some Sadducees, those who deny that there is a resurrection, 28and they asked him a question, saying,

“Teacher, Moses wrote for us that if a man’s brother dies, having a wife but no children, the man must take the widow and raise up offspring for his brother.

29Now there were seven brothers. The first took a wife, and died without children. 30And the second 31and the third took her, and likewise all seven left no children and died. 32Afterward the woman also died.

33In the resurrection, therefore, whose wife will the woman be? For the seven had her as wife.”

34And Jesus said to them,

39Then some of the scribes answered, “Teacher, you have spoken well.” 40For they no longer dared to ask him any question.

On this occasion, the party of the Sadducees came to Lord Jesus with the intention of ridicule Him, asking our Lord an exaggerated question about marriage in a hypothetical context of resurrection, which they themselves did not believe in.

In this elongated marital case, where a woman ends up marrying seven brothers, to finally die without having offspring to any of them, Jesus gets asked whose wife, she will be considered at the ‘resurrection’, hoping to entangle Him in a complicated theological argument.

Lord Jesus, knowing that they did not believe in the resurrection or even the after-life, and that that question was given with bad intention, revealed to all the present a fact of the after-life which nobody had heard before until then:

1 – JESUS revealed to them that in the after-life, even after the resurrection, which the Sadducees themselves had mentioned; glorified people (Those worthy to attain glory v.35) are not given in marriage, or live in a married state, but that everyone is on the same level as children of God.

With this, our Lord not only responded the question to the Sadducees, explaining to them that the woman in question won’t be anyone’s partner in glory, even though in the flesh she was married to seven men; but also responds to wrong ideas today, where some think like the Mormons, that marriages are eternal, or that people in glory can continue getting married; or others who hope to be saved but get married during the Millennium. NONE of these things are possible, for according to Jesus, marriages in general, end up with death (1Corinthians 7:39) and that people in glory do not get married.

ALSO, those who are saved, once resurrected or transformed, as will be the case of those righteous, found either dead or alive by the time Lord Jesus returns, WONT BE MARRIYING ANYMORE (v.35-37) during the Millennium on Earth.

2 – LORD JESUS CHRIST, also openly declared to these heretics, knowing what they really believed and the evil intention in asking Him this question, that the Resurrection of the dead is real, it will happen (v.37); but not only this, Lord JESUS also declared that the spirits of the dead are present constantly before GOD, by pointing out the present tense in the declarations of Moses, regarding YHWH and Abraham, Isaac and Jacob, by saying ‘I AM’ not ‘I WAS’ the God of these prophets.

By saying that GOD ‘IS’ a God of the living, not of the dead and unconscious, Jesus declares the conscious existence in the spirit world of all people during the intermediate state before the general resurrection of the body.

LORD JESUS ALSO ADMITTED HERE, THAT HE IS NOT YHWH, as some are used to think these days wrongly.

Jesus speaks about GOD YHWH, his Father, as being the GOD of Abraham, Isaac and Jacob, speaking as if this GOD YHWH, is a different person to Himself, and who is the one who spoke to Moses in Horeb.

JESUS IS THE REFLECTION OF THE FATHER, BUT HE IS NOT THE FATHER.

JESUS is the reflection of GOD INVISIBLE, but HE IS NOT YHWH (Colossians 1:15).