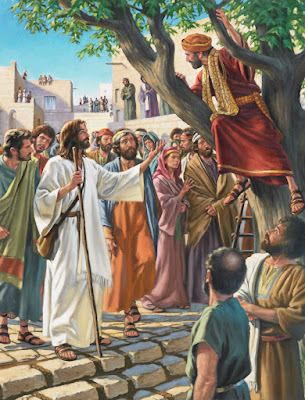 1He entered Jericho and was passing through. 2And behold, there was a man named Zacchaeus. He was a chief tax collector and was rich.

3And he was seeking to see who Jesus was, but on account of the crowd he could not, because he was small in stature. 4So he ran on ahead and climbed up into a sycamore tree to see him, for he was about to pass that way.

5And when Jesus came to the place, he looked up and said to him, “Zacchaeus, hurry and come down, for I must stay at your house today.” 6So he hurried and came down and received him joyfully. 7And when they saw it, they all grumbled, “He has gone in to be the guest of a man who is a sinner.”

8And Zacchaeus stood and said to the Lord, “Behold, Lord, the half of my goods I give to the poor. And if I have defrauded anyone of anything, I restore it fourfold.”

9And Jesus said to him, “Today salvation has come to this house, since he also is a son of Abraham. 10For the Son of Man came to seek and to save the lost.”

Coming down from Galilee to Jerusalem for his crucifixion (Luke 18:31-34), Lord Jesus, after healing and teaching many along the way, passed through the famous town of Jericho, where a Jewish Roman Tax collector, a short man called Zacchaeus was interested in getting to know more of this famous Rabbi, Jesus of Nazareth, who claimed to be the Messiah promised in the Torah and the Prophets.

But even though Zacchaeus had never met Jesus before, he denoted a pre-existent faith in Jesus, when he shows his anxiety for seeing Him and calls Him ‘Lord’, and makes promises of repentance before Him (v.3-4,8); but Jesus was the one who stopped, looked at Zacchaeus, and calling him by name (v.5), announced his intention to stay at his house, which indicates that Jesus was aware of who he was, that He knew about the terrible reputation of Zacchaeus before the Jewish society by being a money collector at the service of the invader Romans; and Jesus was also aware of the faith that this Tax collector had already in his soul for Jesus.

The fact that he was a Tax collector, a traitor, a servant of the oppressors; and that this was a motive of criticism from those who saw Jesus going to stay at this traitor’s home as a guest (v.7), is mentioned by Luke, to exalt the great mercy of Jesus towards the worst of sinners.

JESUS did not pay attention of other’s opinion about Him or Zacchaeus, or treated Zacchaeus with disdain, knowing his type of work; but instead, showed his mercy before the whole world by giving this man forgiveness, assumed in his words, ‘Salvation has come to this house’ (v.9).

BUT JESUS did not just freely forgive Zacchaeus, as some may think today in the evangelical world. Jesus offered his mercy in the opportunity for redemption to a man who had already opened his heart to Him, but also who had demonstrated repentance from his evil life (v.8); but once faith and repentance had been shown, forgiveness came freely from the Son of God, who said:

“For the Son of Man came to seek and to save the lost.”