THE RICH MAN AND LAZARUS 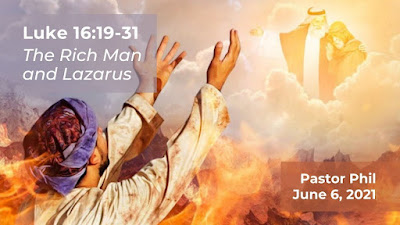 THE RICH MAN AND LAZARUS

19“There was a rich man who was clothed in purple and fine linen and who feasted sumptuously every day.

20And at his gate was laid a poor man named Lazarus, covered with sores, 21who desired to be fed with what fell from the rich man’s table. Moreover, even the dogs came and licked his sores.

22The poor man died and was carried by the angels to Abraham’s side. The rich man also died and was buried, 23and in Hades, being in torment, he lifted up his eyes and saw Abraham far off and Lazarus at his side.

24And he called out, ‘Father Abraham, have mercy on me, and send Lazarus to dip the end of his finger in water and cool my tongue, for I am in anguish in this flame.’

25But Abraham said, ‘Child, remember that you in your lifetime received your good things, and Lazarus in like manner bad things; but now he is comforted here, and you are in anguish. 26And besides all this, between us and you a great chasm has been fixed, in order that those who would pass from here to you may not be able, and none may cross from there to us.’

27And he said, ‘Then I beg you, father, to send him to my father’s house— 28for I have five brothers—so that he may warn them, lest they also come into this place of torment.’

29But Abraham said, ‘They have Moses and the Prophets; let them hear them.’

30And he said, ‘No, father Abraham, but if someone goes to them from the dead, they will repent.’

31He said to him, ‘If they do not hear Moses and the Prophets, neither will they be convinced if someone should rise from the dead.’”

This parable, described only in the gospel of Luke, it has nevertheless been the second most popular parable after the parable of the ‘Prodigal Son’, also narrated in this same gospel (Luke 15:11-32), and that contains many theological and spiritual truths that have become the pillars of the Gospel of Jesus.

This fictitious story was narrated by our Lord Jesus to emphasize the responsibility each of us has, in this world, to take care of our spiritual and moral condition before GOD.

This story was not narrated to leave a full lesson of moral standards, or to illustrate the details of the afterlife to satisfy our curiosity. It is a quick tale of someone able, who chose to be bad, despite of the obvious good before him, and that after being condemned, he is told that each of us, in this case his surviving brothers, has a moral responsibility to live in rectitude before God and men, having been provided with everything we need to do so, without excuses.

However, Lord Jesus never used false premises to build a truth. To use a context that is based on inexistent reality, would be like to build a house over sand.

In the same way, even though the story is a tale, and even though its purpose is to emphasize personal responsibility, in order to achieve that purpose, the details surrounding the story, also need to be real.

Jesus personifies the personal sinfulness of the Rich man, who been extremely rich, lived-in excesses (v.19), and even though he was so rich that he could have spared some wealth without been personally affected, he ignored the pain of his fellow human, outside his door, who wasn’t only disposed, but also hungry and in despair (v.20-21).

The sinfulness was the insensibility of a man hardened by hedonism, who did not care about anyone, not even about someone suffering before his eyes.

This level of insensibility represents the condition of all sinful men, who do not care about anyone else, except themselves, while they commit their crimes.

And it must be noticed, that this sin was not in the exercise of any thing illegal. The wealth was the Rich man’s, and he was just carrying on with his own life, in excess, but apparently not harming anyone, but he was evil enough as to don’t feel mercy, and sinned in omission instead that in action, failing to do what any human should do in his situation, help another human in need, especially, when he is next to you.

Both lives, extremely good and powerful, and the other, extremely bad and defenseless; they both get equally interrupted at death.

Lord Jesus makes clear that nothing in this life is forever, because, regardless of how happy and powerful you may be, or how disgraceful your existence may be, all comes eventually to an end, and the time to answer GOD for what we have done with our lives, comes to us all.

The idea that all men undergo a personal judgement immediately after death, is a doctrine born from a deductive analysis of the Scripture, than from an explicit mention of it in the Bible. In fact, there are not many express mentions in Scripture of a personal judgement immediately after death, except only that it is assumed in a few passages (Philippians 1:22-23; Hebrews 9:27), and this is the main one.

For the spirits of the Rich man and Lazarus to be taken to two different places, instead of the same place after death, a judgement is understood to have taken place, either with the awareness or not of the individuals, but it has happened (v.22-23; 25-26).

Some marginal Christian groups who deny the conscious existence of the souls after death, disregard this and other details, saying that they are irreal, because the whole parable is a fiction.

However, even though the theme of the story is a fiction, the details cannot be, other wise the reason of the parable will fail.

In order to be morally responsible, there must be a moment of accountability. To render accounts of our lives, implies a real judgement, and this judgement, according to Lord JESUS, is immediately after death. WHY?, because if it was an image of the Last Judgement, and not the image of another judgement prior to that, the relatives of the Rich man would not be alive. Certainly, the Son of God is smart enough to have created a different story if that would be the case, to make his point across.

Conscious existence, either in lament or bliss, is taught here by Lord Jesus, otherwise, if the Rich man and Lazarus were unconscious, the rest of the parable would be pointless, and would have been rejected by all his listeners as a lie or a forgery.

Even though, real punishment can only occur after the Last Judgement, when the sentences are given and the books closed forever; the Rich man and Lazarus were sent to a place of waiting, a preamble of their final state after their resurrection (v.22-23).

Something important to mention here, is that there is no need for men to be aware of this judgement, since they will answer in public and officially at the Day of Judgement, after their resurrection. But we all will have a clear knowledge of our future when we find ourselves either in lament or in bliss after passing this life, which will remain until we receive the fulness of punishment or rewards in body and soul at the resurrection.

Traditionally some Eastern Christians have held the belief that condemned people, and even demons, can be redeemed from their final condition, as long as it happens before the Last Judgement. That is why some of their ‘saints’ are famous for having prayed for the salvation of Satan and his angels.

Regardless of their good intentions, THE BIBLE, teaches that this is IMPOSSIBLE.

The Rich man is told that there is an abyss between the section of the condemned and the saved, and that is impossible to cross them, even if they wanted to.

The final lesson and the reason of the parable, is that neither miracles or portents will save a human, if he himself or herself, is not convinced of their sinfulness and repents. And that we all have the opportunity to know GOD’s will through THE SCRIPTURES.

No traditions, or stories or magisterium, or special people on earth, but through the SCRIPTURES ALONE. That is evident when Abraham only mentions the Tanakh as a source of divine knowledge and not the Levitic priesthood, or ceremonies of the Temple, or the guidance of any Rabbi or teacher.

SCRIPTURES alone are mentioned, because they contain the unadulterated word of GOD, and the only means through which the HOLY SPIRIT convinces a man of his sinfulness and the need of repentance.