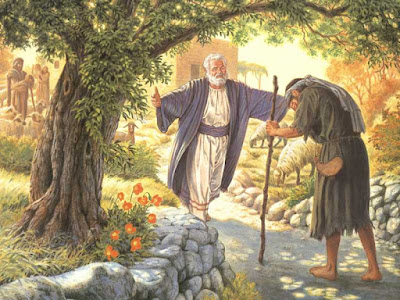 “There was a man who had two sons.

12And the younger of them said to his father, ‘Father, give me the share of property that is coming to me.’

And he divided his property between them.

13Not many days later, the younger son gathered all he had and took a journey into a far country, and there he squandered his property in reckless living.

14And when he had spent everything, a severe famine arose in that country, and he began to be in need.

15So he went and hired himself out to one of the citizens of that country, who sent him into his fields to feed pigs. 16And he was longing to be fed with the pods that the pigs ate, and no one gave him anything.

17“But when he came to himself, he said, ‘How many of my father’s hired servants have more than enough bread, but I perish here with hunger! 18I will arise and go to my father, and I will say to him, “Father, I have sinned against heaven and before you. 19I am no longer worthy to be called your son. Treat me as one of your hired servants.”’

20And he arose and came to his father.

But while he was still a long way off, his father saw him and felt compassion, and ran and embraced him and kissed him.

21And the son said to him, ‘Father, I have sinned against heaven and before you. I am no longer worthy to be called your son.

22But the father said to his servants, ‘Bring quickly the best robe, and put it on him, and put a ring on his hand, and shoes on his feet. 23And bring the fattened calf and kill it, and let us eat and celebrate. 24For this my son was dead, and is alive again; he was lost, and is found.’ And they began to celebrate.

25“Now his older son was in the field, and as he came and drew near to the house, he heard music and dancing. 26And he called one of the servants and asked what these things meant. 27And he said to him, ‘Your brother has come, and your father has killed the fattened calf, because he has received him back safe and sound.’

28But he was angry and refused to go in. His father came out and entreated him, 29but he answered his father, ‘Look, these many years I have served you, and I never disobeyed your command, yet you never gave me a young goat, that I might celebrate with my friends. 30But when this son of yours came, who has devoured your property with prostitutes, you killed the fattened calf for him!’

31And he said to him, ‘Son, you are always with me, and all that is mine is yours.

32It was fitting to celebrate and be glad, for this your brother was dead, and is alive; he was lost, and is found.’”

In this parable, the greatest of all of Lord Jesus’ stories, our Lord departs from the strict traditional comparison between Israel and the gentiles; and addresses this tale to all his listeners, having in mind all of humanity, Jews and Gentiles alike, making a comparison between those who live a life consecrated to God in submission, and those who rebel and abandon God for a while, regardless of their nationality, gender and background; and how the Love of God the Father, supplies with his mercy all our short comings, if we repent, in order to save us.

By saying that both characters in relation to the Landlord, are his children, places the parable among those who are in the Kingdom of God and not outside from it.

This cannot be applied to humanity before Adam’s fall, because we all sinned in Adam.

Neither can be Israel and the Gentiles, because neither remained faithful as a group to God at all times.

This also does not apply to an always believing group and another unbelieving group that converts for the first time, since both characters are called sons, and know their father, so much that the memory of Him, moves one of them to repentance.

This can only fit in an depiction of the faithful and unfaithful believers, be in the OT or NT, in relation with GOD our Father.

Some of us depart from God lured by women, money and power; and start living a life of sin, like if we had never known God. But that slowly denigrates us, physically, financially, morally and always spiritually, bringing all of us to the same end that awaits to all active sinners, misery, sorrow and death.

But here Lord Jesus announces the love and mercy of GOD our Father, who loves us, because even when we are in the deepest sin, He still looks at us as his children. And even tough when we live in sin, we become spiritually dead (Romans 6:23), God still loves us and awaits our return.

In this parable, Jesus tells us how the Father, did not even wait for his son to arrive, or to ask Him for forgiveness, since his coming back showed his repentance, but ran to catch up with him, hugged him and kissed him (Luke 15:20), showing that He loved him all along, but He could not force his lost son to come back to Him; he was an independent person and the decision needed to be made by him. But once he took the resolution to come back to his father, our FATHER GOD YHWH, received his repentant son into his house and family without delay (Luke 15:7,20).

The other lesson is for those who remain always faithful to God. NOT THAT THEY NEVER SIN, because we all sin. Even after becoming believers. But as an overall, we never depart from God to live a life of sin, like in the case of the brother who did, according to the parable.

For those who remain faithful, the word of comfort from Lord JESUS, is that they should not be jealous or envious of God’s favors and mercy towards our repented brethren, because we also count with God’s love and favor, and by saying the Father in the parable ‘ALL THAT I HAVE IS YOURS’ denotes an echo of the words of Jesus about each believer receiving crowns of Glory in Heaven, but each according to his own actions and faithfulness (Matthew 25:20-23).