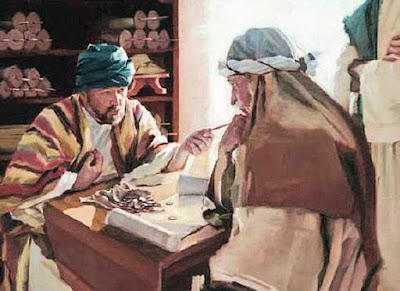 1He also said to the disciples,

“There was a rich man who had a manager, and charges were brought to him that this man was wasting his possessions.

2And he called him and said to him, ‘What is this that I hear about you? Turn in the account of your management, for you can no longer be manager.’

3And the manager said to himself, ‘What shall I do, since my master is taking the management away from me? I am not strong enough to dig, and I am ashamed to beg. 4I have decided what to do, so that when I am removed from management, people may receive me into their houses.’

8The master commended the dishonest manager for his shrewdness. For the sons of this world are more shrewd in dealing with their own generation than the sons of light.

9And I tell you, make friends for yourselves by means of unrighteous wealth, so that when it fails they may receive you into the eternal dwellings.

13No servant can serve two masters, for either he will hate the one and love the other, or he will be devoted to the one and despise the other. You cannot serve God and money.”

In this parable, which is usually misunderstood due to the loss of fluency in translation from ancient Greek, our Lord Jesus Christ makes a practical recommendation to all believers, to act wisely with the means He grants us in this earthly life in order to cooperate to the building of the Kingdom of God.

Firstly, Lord JESUS tells of a story whose topic is well known to secular people all over the world. The street wisdom of the corrupt manager, who by cheating his Master, wins the favour of his debtors, by diminishing their debts towards his employer, in order to gain the favour of the debtors for when his time of dismissal comes.

In the parable, our Lord says that even though the Master found out his treacherous act, nevertheless, he praised his cunning in the situation.

Our Lord Jesus after warning that this was normal among the unbelievers, due to the dishonesty of the manager’s actions (Luke 16:8), still recommends that we should be wise enough, but in a moral way (Luke 16:11), and use the worldly possessions of this life, which in the lexicon of the time are called “unrighteous wealth”, and use them to build the Kingdom of God on Earth, so that when they are no longer available, referring to death, we may be received in God’s Glory.

The mention here of salvation gained by the wise use of our earthly possession, needs to be understood as an act of faithfulness and not as the ‘reason’ of our salvation, because to use of our hard-earned money and property in God’s service, necessarily means that we are active believers and followers of Lord Jesus. The actions prove the truthfulness of our salvific faith, opening the doors of Heaven for us, but not by themselves, since without the atonement of Christ, it is IMPOSSIBLE to attain salvation.

Finally, our Lord Jesus warns that we should live our lives with detachment for the earthly wealth (Luke 16:10), but we should live in God’s service, because apart from GOD being the sole provider of all wealth on Earth, and our lives belonging to Him alone, nobody can serve two interests. We cannot serve God and Money, meaning that we cannot serve God’s interests, and our own, because they will eventually collide, and we will have to make a choice.