ARE MAGIC AND WITCHCRAFT REAL? 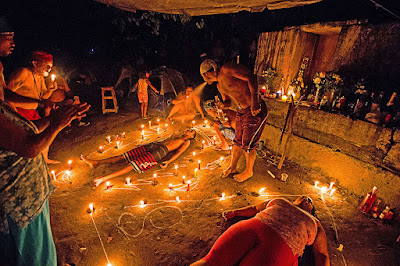 ARE MAGIC AND WITCHCRAFT REAL?

Many times, we may have been able to hear comments from simple people who say that they fear spells or witchcraft, or other times, that they use them to achieve some personal benefit. Other times, on the contrary, we may have been able to listen to others with a higher educational level, to say that neither magic nor witchcraft are effective and that this only affects those superstitious people who believe in it and no one else.

But what does the Bible say about it?

OCCULTISM IN THE BIBLE

The Bible is strict when it comes to all kinds of occultism, and within this, are Spiritism, Sorcery, Divination, occult rituals and other things that are related to them. In fact, it strictly prohibits to participate in these, and punishes them harshly:

“As for the person who goes to mediums or spiritualists, to prostitute himself after them, I will also set my face against that person and cut him off from among his people.”

"Let no one be found in you who puts his son or daughter through the fire, or who practices divination, or sorcery, or is a fortune teller, or sorcerer, 11 or charmer, or medium, or spiritualist, or who consults the dead. 12 For whoever does these things is abominable to YHWH; and because of these abominations YHWH your God will drive out those nations from before you.”

And those who engaged in these practices were sentenced to death:

“If there is a medium or spiritualist among them, male or female, they must certainly die”

In the extensive code of the Law of Moses, there are many punitive rules for each crime according to its severity, and only the strongest or bloodiest crimes received the Death Penalty, and Sorcery is one of these.

MAGIC HAS ALWAYS BEEN EFFECTIVE

There is an old saying that is not of biblical origin, but it is very true:

And this is precisely what happens with Occultism.

If people don't believe in Magic or Witchcraft, it's easier to manipulate magic without people noticing, and they will have no idea how to get rid of it. However, if you believe in it, it tends to enslave those who know it with fear, and those who practice it, with spiritual and material ties.

The Bible speaks of Mediums and Fortune Tellers (1Samuel 28), sorcerers and enchanters (Numbers 22 and 23), Magicians and possessed persons (Acts 16:16-18 and Acts 19); and all were effective in their actions, regardless of whether the victims believed in them or not. THE ONLY THING that could stop them was the FAITH IN GOD from those whom they tried to harm:

"For there is no omen against Jacob, nor is there divination against Israel."

MAGIC IS REAL AND IS FORBIDDEN

Magic consists in making use of rules in the spiritual world, not given to men in this world; but that were revealed to men since the times of the NEPHILIM, by demons who wanted to break the peace of human life, letting them know forbidden things, and flattering the ambition of others; while all these break the will of God.

In most cases, the demons are the ones who help and guide the sorcerers in how to make use of these rules, while they feed their own corrupt ego, making the sorcerer pay them homage, although sometimes the demons themselves fall victims to more cunning humans, getting locked up and forced to work for them, until at some point these demons break free and kill the ones who did this to them.

GOD does not want us to know the future of our lives, because not knowing, we are more honest and act as we truly are and not pretending.

Life is like preparing for a final exam without knowing the questions; but it wouldn't be an exam if we knew the questions and studied only for them. And magic is just like that thief who tries to steal the exams to know the questions in advance. But worse still, with satanic involvement.

The Occult is real and it is effective, regardless of whether the victims 'believe' in its power or not. It responds to fixed spiritual laws, which are equivalent to the physical laws of the material world, but that have not been made known to men in this world, as not to obscure their freedom of expression and their genuine personality, which would be affected if know for sure their future.

It has not been made known to men because God to protect the integrity of the free will of all humans, because God wants all human relationships to be carried by free will and not through hypnosis or some other way of 'control' over them.

The only barrier against Magic and healing from it, is through living Faith in Christ JESUS ​​and a clean life before Him.

An active Christian will not be affected by any type of spell, magic or enchantment; and to those who have fallen victims of it before their conversion, only Faith in Christ, fasting, prayer and reading of the Word of God will free them from all spiritual bondage, including demonic possession.

The devil doesn't want us to know Magic is real unless we submit to it. But Christians, knowing that if it is real and effective, must always fight against it, preventing and correcting the wrongs it causes in those unbelievers who have fallen victim to the occult.