MANY WILL SEEK TO ENTER, BUT THEY WON'T BE ABLE TO 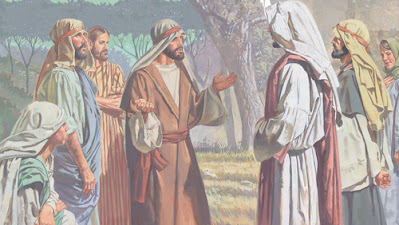 MANY WHO WILL SEEK TO ENTER, WON’T BE ABLE

22He went on his way through towns and villages, teaching and journeying toward Jerusalem. 23And someone said to him, “Lord, will those who are saved be few?”

And he said to them,

24“Strive to enter through the narrow door.

For many, I tell you, will seek to enter and will not be able.

25When once the master of the house has risen and shut the door, and you begin to stand outside and to knock at the door, saying, ‘Lord, open to us,’ then he will answer you, ‘I do not know where you come from.’

26Then you will begin to say,

‘We ate and drank in your presence, and you taught in our streets.’

‘I tell you, I do not know where you come from. Depart from me, all you workers of evil!’

28In that place there will be weeping and gnashing of teeth, when you see Abraham and Isaac and Jacob and all the prophets in the kingdom of God but you yourselves cast out.

29And people will come from east and west, and from north and south, and recline at table in the kingdom of God. 30And behold, some are last who will be first, and some are first who will be last.”

While teaching his disciples and the pharisees about the way to salvation, someone asked our Lord if the saved would be many or not (v.23).

JESUS did not answer this question because that would only satisfy man’s carnal curiosity, but instead He warned the questioner to be responsible and not to delay his repentance and come to God as soon as he could, because the time would come when the moment for repentance and grace will end, and then it would be too late to come to Jesus for forgiveness.

With this warning, JESUS denies the Calvinistic claim of indiscriminate predestination, where arbitrarily, humans are chosen to repent, while others are left aside to burn forever in the Lake of Fire, by a deliberate act of God. The warning to rush up to make a decision to follow Jesus and don’t lose the opportunity, is exactly because all will hear the invitation, and the decision is totally ours, under the general providence of God over all humans, and if we think for too long, or reject the invitation to come to Lord JESUS; we will be guilty for our own decision and be condemned justly.

Our Lord also adds, that people from all over the world will come to salvation, rejecting all classicism and racism, and all impossibility to repent and surrender to Jesus for all humans.

And Jesus closes with a warning, that many who come first from the world into the Kingdom of Heaven, will be put last; and from all those who arrived last, will be honor with the first placed in God’s kingdom.

With this, Jesus denied the inheritance of salvation held in Judaism, or any other fact, except the holiness of each of us, which determine our place in Glory, regardless of when we believed.