JESUS HEALS A MAN WITH DROPSY ON A SABBATH 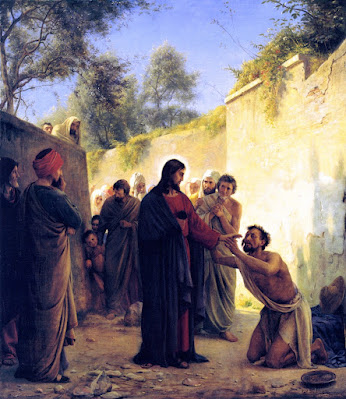 JEUS HEALS A MAN WITH DROPSY ON SATURDAY

1One Sabbath, when he went to dine at the house of a ruler of the Pharisees, they were watching him carefully.

2And behold, there was a man before him who had dropsy.

3And Jesus responded to the lawyers and Pharisees, saying, “IS IT LAWFUL TO HEAL ON THE SABBATH, OR NOT?”

4But they remained silent.

Then he took him and healed him and sent him away.

5And he said to them,

“WHICH OF YOU, HAVING A SON OR AN OX THAT HAS FALLEN INTO A WELL ON A SABBATH DAY, WILL NOT IMMEDIATELY PULL HIM OUT?”

6And they could not reply to these things.

During one of his visits to Jerusalem, Lord JESUS accepted a dinner invitation from one of the Pharisees, probably one of the many who could not make up their mind about Him yet, nevertheless they sympathized with Him (John 12:42).

But knowing of their religiosity, Lord Jesus knew that even though the pharisees and publicans were very strict according to the letter of the Mosaic Law, their hearts were not.

In their religious zeal, the Jews had lost the view of the spiritual reasons behind the Law, dedicating themselves simply to fulfil the mandates without understating why, and thus, converted the true faith of in God, into a dead religion in the majority of cases.

On this occasion, being the Sabbath, the poor were allowed to approach the houses of rich counterparts to be served a good meal (1), and one of them, a man suffering of fluid retention, had caught the attention of the Savior.

To teach them the reason of the Sabbath to these religious men who had invited Him for dinner, and having mercy in his heart for the sick man, our Lord asked them if it was lawful to heal on a Sabbath (v.3).

As all remained silent, all of them knowing the fame of Jesus of shutting up all opponents, our Lord healed the sick man, and after sending him away healed, Jesus justified his merciful action by asking them, who would put the Sabbath law over the emergency of saving a property or a child from immediate danger; to which nobody answered either.

That day, even though by tradition the Jews did leave animals in the well until the Sabbath had passed, they did save their children if in danger, no matter what day.

Regardless, GOD JESUS, made clear that the reason for the Sabbath, was to rescue man from his own ambition and insensitivity, and make him leave work and everyday worries, to concentrate in his family, his own person, and to dedicate time to worship God.

Jesus showed that day, that the Sabbath was never given by God to man, to enslaved the faithful, but to free them; and specially never, to forget about the important things in life, like mercy and love for others.