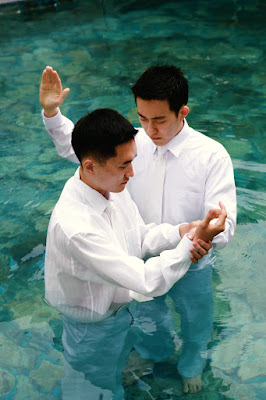 In the book of Acts, it says in every case a baptism occurs, that it was done in the ‘Name of Jesus’:

And Peter said to them, “Repent and be baptized every one of you in the name of Jesus Christ for the forgiveness of your sins, and you will receive the gift of the Holy Spirit.”

Even though in Matthew 28:19, a detailed command by Jesus Himself orders Baptism to be celebrated under the Name of the ‘Father, Son and Holy Spirit’.

Since early times, and most recently after the birth of the ‘Jesus Only Movement’ or modern Modalism; it has been claimed by them, that the formula described in Matthew 28:19 is a later addition to the text, and therefore, the only valid baptism would be under the ‘Name of Jesus’ as mentioned in the book of Acts.

A theory was presented that considered Matthew 28:19, a 4th century addition to the Gospel, but that is only a speculation.

However, to alter every manuscript in existence would have been impossible. Not even the Roman Emperor Diocletian (284-305), who tried to destroy all the copies of the NT could do it, even having all the authority and means to attain it.

It is also said that Eusebius of Caesarea quoted in some of his writings, Matthew 28:19 without the Trinitarian formula. But Eusebius was known to quote freely from memory, and indeed he quoted the full trinitarian version in the same set of writings, to later write it again in the shorter form (1).

Furthermore, Eusebius was an Arian sympathizer, and Arians baptized “In the Name of the Father, the Son and the Holy Spirit”, which shows that he did not intend to either negate or support the formula, since it was irrelevant to his faith (2).

All manuscripts show the mention of the Trinity without exception, and thus is quoted in many writings before the 4th century, like in the

The book of Acts is the only historical book of the NT. It narrates with great simplification, the development of the first years of Christianity taking as reference St Paul’s ministry, under the view of the author of the gospel of Luke.

It is intended to give a general testimony that GOD accompanied the preaching of the Apostles and first Christians, through miracles, and also give testimony of how the Church developed from former Judaism into the modern religion it became afterwards; and that is why only Judaizing Christians are mentioned as opposition, as well as decisions against circumcision and eating habits.

Since Christian baptism developed from the Jewish Mikvah, the Jewish ritual washing of sins; which also was practiced by John the Baptist; the baptisms in Acts are mentioned as celebrated ‘in the Name of Jesus’ to make clear that this new Mikvah was a different one, who identified the baptized not only with his repentance, but also with the life-death-and resurrection of Jesus to a new life.

We cannot deny the theory that some Christians may have celebrated baptisms in the Name of Jesus alone, during the first century of Christianity, but that was one of many irregularities that happened in those early years, where instruction was beginning, and in the middle of persecutions and lack of communication, especially when there was still not a fixed canon in force. But by the beginning of the second century that had disappeared altogether, and looking back in perspective, we can see, as the DIDACHE testifies, that the proper instruction coming from above, was Matthew 28’s model and not Acts.

The mention of baptism ‘In the Name of Jesus’ in the historical book of Acts, was not a detailed description with theological binding, but a declaration that this ‘water’ ritual, was celebrated under the authority of Jesus of Nazareth, instead of John the Baptist, or the Jewish Temple authorities.

Baptism in the New Testament, by