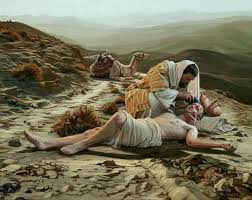 25And behold, a lawyer stood up to put him to the test, saying, “Teacher, what shall I do to inherit eternal life?”

28And he said to him, “You have answered correctly; do this, and you will live.”

29But he, desiring to justify himself, said to Jesus, “And who is my neighbor?”

“A man was going down from Jerusalem to Jericho, and he fell among robbers, who stripped him and beat him and departed, leaving him half dead.

33But a Samaritan, as he journeyed, came to where he was, and when he saw him, he had compassion.

34He went to him and bound up his wounds, pouring on oil and wine. Then he set him on his own animal and brought him to an inn and took care of him.

35And the next day he took out two denarii and gave them to the innkeeper, saying, ‘Take care of him, and whatever more you spend, I will repay you when I come back.’

36Which of these three, do you think, proved to be a neighbor to the man who fell among the robbers?”

And Jesus said to him, “You go, and do likewise.”

A Nομικός, or ‘expert’ in the Mosaic Law, much more than a Scribe, came to question our Lord Jesus about the ‘way of salvation’, presented as a crucial question since it justified the final existence of revelation, the law and life itself.

To this honest question, different to the one told in Matthew 22:34-40; our Lord answered with another question, to show the man that he himself knew the answer. Jesus asked him what the Law said in that respect, considering that He knew the man was a Lawyer.

The Lawyer answered quickly and correctly. In an instant, without getting involved in useless rhetoric, the man simplified the reason of the Tanak into the two most important aspects of it, which constitute the basis of the Law, the Prophets, the Writings, and all relationship with God in general:

“LOVE GOD WITH ALL YOUR HEART, SOUL, STRENGHT AND MIND; AND YOUR NEIBOUR AS YOURSELF”

After Jesus ratified his answer and said to him to do them and that he will be saved, he changed suddenly (v.29), the Scripture said in order to ‘justify himself’. It sounds that he must have not lived the part of loving ‘your neighbor as yourself’ very well, so he pretended not knowing exactly who a ‘neighbor’ was, and so he asked Jesus about it, to explain to him who could he call ‘his neighbor’.

Lord JESUS CHRIST, told the parable of the ‘Good Samaritan’, where neither a priest nor a Levite helped a fallen Jew, injured on the side of the road after a robbery; and instead, a foreigner, a Samaritan, an official adversary of Judah and Jews, not only helped him, but also paid for his recovery, demonstrating that he had ‘loved that enemy, as himself’.

The Lawyer identified the Samaritan as the real neighbor of the injured Jew; and Jesus told him to do the same for all men.

The man got his answer, but we also got three important lessons:

1 – JESUS left clear the character of God regarding the salvation of mankind.

He recommended to love and help all our fellow humans, without discrimination. That is our Father’s desire, and his will for us, which reflects also his loving personality.

This lesson let us know what was the driving force behind the Plan of Salvation, it was LOVE and MERCY.

In this love and mercy, Jesus also tells us what God has done and will do for all humans, in order for them to have a happy life on this planet, and also eternal life after death; and this includes EVERYONE.

GOD has not elected a few and left others on the side, as Jesus Himself illustrates in this story. Our GOD is not like that. He is not indolent or capricious, or cruel. He is merciful and loving, making clear that everything He does not do, it is not because He doesn’t want to do it, but because He cannot.

God elected men and women for salvation or condemnation, based not on his own capriciousness, but based on the pre-cognition of what the answers and attitudes people will have when they hear the gospel of JESUS preached to them during their earthly lives, so that nobody is condemned for ‘not having been elected’, but they were ‘not elected’ because they rejected JESUS on their own free will and remained unrepentant until their death.

2 – JESUS also taught us that to ‘love’ our neighbor is not a matter of emotional feelings, but of practical duty.

By the example of the story, the Samaritan did not know the fallen Jew to feel any love for him of any kind whatsoever; nevertheless, he acted as if he had, by attending to his immediate needs with all honestly and care.

We are expected to act the same with other humans, by looking out for them ‘in the same way’ we would for a brother in need. And if not in need, with the courtesy and consideration that we would give to them.

3 – THAT FAITH without actions that support it, it is not counted by God.

In Jewish minds, the same as in God’s; when a person professes to have a certain view of any kind, it is expected to act and live accordingly, if not he or she will be considered a liar.

The same way in this story, the real neighbor of the fallen man, was not his own countrymates or people of the same religion of his; but the Samaritan, a man of another race and religion, but the only one who acted truly as a brother to him, in exchange for nothing.