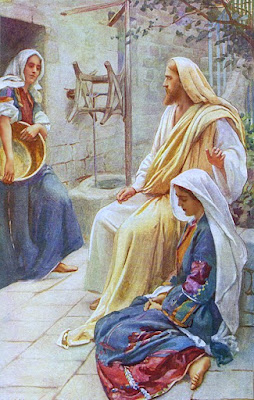 38Now as they went on their way, Jesus entered a village. And a woman named Martha welcomed him into her house.

39And she had a sister called Mary, who sat at the Lord’s feet and listened to his teaching. 40But Martha was distracted with much serving.

And she went up to him and said,

“Lord, do you not care that my sister has left me to serve alone? Tell her then to help me.”

41But the Lord answered her,

“Martha, Martha, you are anxious and troubled about many things, 42but one thing is necessary.

Mary has chosen the good portion, which will not be taken away from her.”

This is the only time these women are mentioned in the gospel of Luke, to then be mentioned nearly 30 years later in the most developed gospel of John chapter 11.

By tradition and inference, it is assumed these are Lazarus’ family, the same that was resurrected in Bethany (John 11) which we get to know more deeply in the gospel of John, written at the end of the first century.

In this occasion, the woman called in Aramaic “Martha”, seems to have converted first to the preaching of the Messiah, and invited Him into his own family house to share the gospel with her loved ones.

Scholars think Martha must have been either a widow or a single woman, since he lived only with her sister and brother (If these are the same as in John 11), since no mention of any other name of husbands, wife or children is made around them at all.

As the one who extended the invitation, Martha got busy preparing a meal for Lord Jesus, possibly also his disciples and her own family, and she must have been so occupied with this, that she complained to Jesus about her other sister Mary who was placidly sitting near the Lord with others listening to Him, of how it was possible that she alone was doing everything, and that Mary should come to help her.

To this Lord JESUS said that Martha, had invited Him into her home, but was busy doing things of this world, instead of listening to Him, and therefore He would not take that away from Mary who had chosen to do exactly what she was supposed to be doing, listening words of eternal life.

IT IS NOT that JESUS ignored the good effort of Martha, or that He was indolent towards the workload of a good woman who was the first one that believed in Him and gave Him lodging, that He answered like that to her.

If Martha invited the Lord, she should have listened to Him first, before anything else; but if she had decided to offer her service to feed them all, then she should not have complained about that blessing. She could also hear and speak to the Lord any other time from the days He had planed to stay in her home.

Regardless, the point the Lord made to all of them and to us readers, is that the things of God should take more importance in our lives than the things of this world, regardless of how crucial they may seem to us.

This way, Jesus also instructed Martha on this fact, so that she would understand that food could have been served later, or that she would be rewarded in Heaven for her altruistic effort (Matthew 24:45-46), but that to listen to the words of eternal life was primordial to everyone there, at that time.