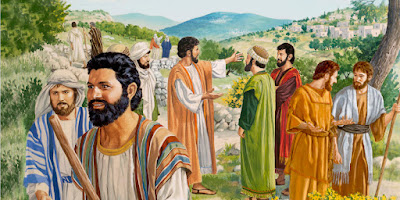 1After this the Lord appointed seventy-two others and sent them on ahead of him, two by two, into every town and place where he himself was about to go.

2And he said to them,

“The harvest is plentiful, but the laborers are few. Therefore, pray earnestly to the Lord of the harvest to send out laborers into his harvest.

3Go your way; behold, I am sending you out as lambs in the midst of wolves. 4Carry no moneybag, no knapsack, no sandals, and greet no one on the road.

5Whatever house you enter, first say, ‘Peace be to this house!’ 6And if a son of peace is there, your peace will rest upon him. But if not, it will return to you. 7And remain in the same house, eating and drinking what they provide, for the laborer deserves his wages. Do not go from house to house. 8Whenever you enter a town and they receive you, eat what is set before you.

9Heal the sick in it and say to them, ‘The kingdom of God has come near to you.’

10But whenever you enter a town and they do not receive you, go into its streets and say,

11‘Even the dust of your town that clings to our feet we wipe off against you. Nevertheless, know this, that the kingdom of God has come near.’

12I tell you, it will be more bearable on that day for Sodom than for that town.”

The old manuscripts are not consistent in whether the number is 70 or 72, but certainly is a pair number within these two quantities, since no other variation has been mentioned in the ancient documents. However, through internal evidence, it seems that they were just clean 70, in representation of the 70 Elders that were elected to help Moses in the ruling of the nation of Israel in the desert (Numbers 11:16), and to whom authority was given from God through Moses. This was a sign then of the establishment of a new kingdom, the kingdom of the new nation based in the sacrifice of Jesus, his teachings and his authority. The Christian church.

In his love and mercy, Jesus sent this large quantity of preachers to the towns before He arrived there, so that when they saw Him the first time, they would be familiar already with Him, his ministry and doctrine, so that it would be easier for them to chose to accept Him as Lord and follow Him, and be saved.

These 70 disciples were not random number. They represented the 70 Judges of Israel, that were established over the nation by Moses in the desert, being Lord Jesus the new prophet of a new nation that was being liberated from the slavery of sin, into the life of the Spirit of God.

These 70 also represented the nations of the world, as Jews understood to be 70 through Tradition, meaning that Jesus was calling to repentance the whole world, Jew and Gentile (See Feast of the Tabernacles, 70 bulls sacrifice for the ‘nations of the world’) into his Kingdom.

He invested them with power and authority (Luke 10:19), similar to the authority and power He gave to his 12 Apostles, even though they did not have the same level of authority as them (Luke 9:1-6; Revelation 21:14), but they had authority all the same.

They were sent in pairs because that was the usage of the time to serve as witness in a case or argument (Deuteronomy 19:15; Matthew 18:16), since they were sent before Jesus to give testimony of his Messianic claim and lordship. They were also sent by pairs to support one another in faith and perseverance, against a world controlled by the enemy (Luke 10:3)

The divine right to maintenance was granted to them, and as an example for all fulltime workers of the Kingdom of God.

As the Levites were exempted from secular work to support themselves, these ministers of the gospel, were authorized to live from the field, the Church of God. They were allowed to lodge and eat in a member’s house, at no cost; while our Lord promised to take care of them while they were on their way and back. The same way we are the OBLIGATION to support financially our Ministers and Church workers who dedicate their lives fulltime to serve God and ourselves in the modern world. The owe them a living.

FINALLY, the warning of our Lord JESUS CHRIST to all humanity.

To those who have been given the opportunity to listen the gospel pure, and accept Christ as their Lord, and reject Him; they have signed their condemnation, since salvation can ONLY BE ACHIEVED THROUGH CHRIST ALONE.

There is no other way, no other manner, no other savior, no other path to forgiveness, except the blood of Jesus, who gave his life to save us, in payment of our sins.

But do not panic.

The time is open while you are alive.

Many reject Jesus and abuse his Holy Name while they are alive, to later come to faith and believe. JESUS NEVER SAYS NO…WHILE YOU ARE ALIVE..

However, this warning is against those who die in rejection and unbelief.

ONCE DEAD, IT IS DONE.

You account is closed, and now comes the account giving to the ETERNAL GOD how made you. And there is no way back, no intermediate redemptive state.

IT IS HEAVEN OR HELL, FOR ALL ETERNITY.

The election is yours.