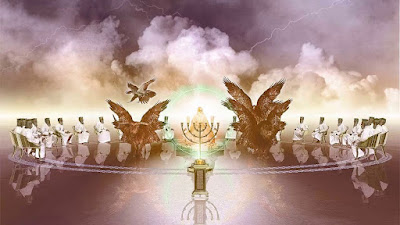 Grace to you and peace from him who is and who was and who is to come, and from the seven spirits who are before his throne, and from Jesus Christ the faithful witness, the firstborn of the dead, and the ruler of kings on earth.

The definition and description of the Holy Trinity is a man-made theological formula, that not even today, have the traditional ‘catholic’ churches come to a common agreement, however, it presents in the best manner the spiritual reality of our deity, the Judeo-Christian God of the Bible.

Nowhere in the Bible the Holy Trinity is expressly described, but it is understood through the interchanging of names and personal nature between the known God of Israel (YHWH), the human person of Jesus of Nazareth, and the Holy Spirit, which implies a common divine nature for all them, however also, implying independent identities to make clear that these three are “one”.

The Bible starts by saying in Genesis, that ‘God’, who in chapter one is called ELOHIM, and in chapter two is called Yhaweh, created the universe we live in, not only the planet Earth, but also the Sun, Moon and stars, and it is assumed prior to that the angelic beings (Genesis 1:1).

Later, the gospel of John starts by declaring that prior to his human birth, Jesus of Nazareth already existed in Heaven, together with ‘God’ (Elohim-YHWH), and that He was also God, without clarifying whether that meant that He was divine as YHWH, or if He was really YHWH Himself. And even further, it declares that this ‘Word’ (Logos-Jesus), created everything in the universe, not only the Earth, Moon and Sun, but also the whole creation, even the angelic world, giving Him the position accepted only for God YHWH, making Jesus either YHWH Himself, or as equal as GOD YHWH in nature.

About the Holy Spirit, also called the ‘Spirit of God’ or the ‘Spirit of Jesus’, even though it is presented in most parts as a working agent under the guidance of the Father, He has however his own existence, totally independent from the Father and the Son, to the point that the Holy Spirit can intercede for us before the Father on behalf of Christ (Romans 8:26); and to the point that to dishonor Him, is consider a grave blasphemy, even more than to blaspheme against Lord Jesus, and which it cannot be forgiven (Matthew 12:31-32); thus admitting divinity as well as personality for the Holy Spirit of God.

The possibility of existing three Gods has also been considered by some Christians in the past, as it is professed today by the Church of Jesus Christ of Latter-Day Saints; however this idea would contradict the strict monotheism that it is proclaimed in the whole Bible all throughout and which is the corner stone of the whole Judeo-Christian faith (Deuteronomy 6:4; Mark 12:29, 32; 1Timothy 2:5).

Later, appeared Modalism, which teaches that God is one, but that He has manifested Himself through history as a Father YHWH, as Jesus of Nazareth in the incarnation, and as the Holy Spirit today. These manifestations, it teaches this doctrine, are ‘modes’ of manifestation of the only and one divinity, without the possibility of simultaneous existence. However, this concept also does not conform to the reality that three different beings manifested in the baptism of Jesus (Matthew 3:16-17), one character totally separated from one another, and totally self-existent.

Maybe the best reference to the Holy Trinity, to His reality rather than to the description of Him, is the equal merit Jesus gives to the work of redemption in the baptismal formula, when He orders baptism to be done “In the Name of the Father, the Son and the Holy Spirit” (Matthew 28:19), making the three of them, GOD YHWH, JESUS-LOGOS, and the HOLY SPIRIT, equal in dignity and divinity, and equally responsible of the forgiveness of sins, and salvation of humanity.

But the only part of the whole Bible, where the Holy Trinity is described in a visible manner, is in Revelation 1:4-5; where the author starts his book by greeting the seven churches in the name of God the Father (YHWH), sitting on the throne, in the name of the seven Spirits who are under His Throne, meaning the Holy Spirit in his seven functions of perfection (Isaiah 11:12), and in the name of Jesus Christ, the first-born of the dead.

By mentioning the greetings from each of them by name, John is recognizing that each of them is a total full entity, independent from one another.

And by placing the Father YHWH on the Throne, and the Spirit under Him, and Jesus besides His Throne, the vision is letting us know the eternal subjection of the Holy Spirit and the Son to the Father, holding the Father Himself, GOD YHWH, the unity of the Triune GOD, otherwise called in plural אֱלֹהִ֑ים (ELOHIM-GODS) and being only ONE GOD all along.

The unity and plurality of God may be hard to understand, the same as how one Spirit, can divide Himself in hundreds of flames of fire in Pentecost; but it is a faculty that we cannot understand, because only GOD has it.

The description of the Trinity is a human effort to try to describe to the best of our abilities, the eternal reality of our God, who being one, presents Himself as three, since before anything existed, from eternity.

But even if we do not understand the human concept of the Trinity, the important things is to have a relationship with them all.

With His Son JESUS, our Lord, who died for us and will return for us to bring us to the Father.

With the Holy Spirit, our Comforter, and Sanctifier, who is inside us and with the whole Christian Church at the same time, until the return of Jesus.

That is why God manifested Himself as three, because whether we understand the academic definition of the concept or not, we are called to live it, relating to each of them, separately, everyday of our lives, and then, for all eternity.