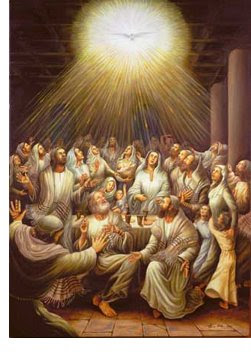 When the day of Pentecost arrived, they were all together in one place. 2And suddenly there came from heaven a sound like a mighty rushing wind, and it filled the entire house where they were sitting.

3And divided tongues as of fire appeared to them and rested on each one of them. 4And they were all filled with the Holy Spirit and began to speak in other tongues as the Spirit gave them utterance.

5Now there were dwelling in Jerusalem Jews, devout men from every nation under heaven. 6And at this sound the multitude came together, and they were bewildered, because each one was hearing them speak in his own language.

7And they were amazed and astonished, saying, “Are not all these who are speaking Galileans? 8And how is it that we hear, each of us in his own native language?

9Parthians and Medes and Elamites and residents of Mesopotamia, Judea and Cappadocia, Pontus and Asia, 10Phrygia and Pamphylia, Egypt and the parts of Libya belonging to Cyrene, and visitors from Rome, 11both Jews and proselytes, Cretans and Arabians—we hear them telling in our own tongues the mighty works of God.”

12And all were amazed and perplexed, saying to one another, “What does this mean?”

During the Feast of Weeks, the Hebrew celebration of the Wheat harvest, occurring 50 days after the Passover; the eleven apostles plus all other disciples, men, women and children, probably more than 120 people (Acts 1:15), were in the upper room in Jerusalem, as indicated by our Lord Jesus at the time of his ascension (Acts 1:4-6), waiting patiently for the coming of the Holy Spirit.

They were never told how long they had to wait for it, but they were diligent, they did not lose heart, and continued in prayer and dedication, waiting for the coming of the Comforter that was promised by Jesus beforehand (John 14:15-17).

Then suddenly, a strong wind swept through the place, and the Holy Spirit, dividing Himself in flames of fire, according to the number of the present, descended on each of the believers, provoking a state of ectasis, and without knowing, while they believed they were praising God in their own language, they started to be understood by the people outside their building.

People from all the Roman empire, present in Jerusalem for the Feast of Weeks, Greeks, Romans, Arabs, Africans, and many more, listened their praising in their own languages, wondering what was happening to them, since they were common Galileans, uneducated, specially in all languages of the known world.

God Father, sent the Gift of His Spirit on the Feast of Weeks, as a symbol that these men, now filled for the first time in history with the Spirit of God, were the new harvest of his vineyard, collected as new wheat for a new purpose, based on the new covenant based on the sacrifice of Jesus on the Cross.

This day, was the Day of Harvest of the Christian church, harvested and collected from the ruined Israel, who had just rejected the Messiah, and that day a new and eternal covenant was proclaimed to the world.

It was not them but GOD inside them, in the person of the Holy Spirit, who spoke in other languages, as a sign that this time, God did not demand people to convert to the Jewish way for salvation, but that this time God Himself went to the street looking for them, speaking their own language, in their own places, and respecting their own cultures. God was getting close to the world in a language and manner they could understand.

This time also, the Holy Spirit, being One, divided Himself equally in several flames of fire, probably in more than 120 in total, entering each of the there present, fully, not partially, displaying his divinity, since ONLY GOD, can be entirely in several places at the same time, and also be in Glory reigning all over the universe.

That glorious day, 3000 converted to Jesus Christ, and the Christian Church started as it is today, until the return of our Lord and Savior JESUS CHRIST.