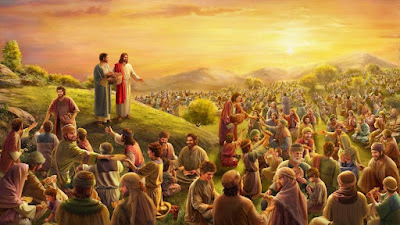 On their return the apostles told him all that they had done. And he took them and withdrew apart to a town called Bethsaida.

11When the crowds learned it, they followed him, and he welcomed them and spoke to them of the kingdom of God and cured those who had need of healing.

12Now the day began to wear away, and the twelve came and said to him,

“Send the crowd away to go into the surrounding villages and countryside to find lodging and get provisions, for we are here in a desolate place.”

“You give them something to eat.”

“We have no more than five loaves and two fish—unless we are to go and buy food for all these people.” 14For there were about five thousand men.

And he said to his disciples,

“Have them sit down in groups of about fifty each.”

15And they did so, and had them all sit down.

16And taking the five loaves and the two fish, he looked up to heaven and said a blessing over them. Then he broke the loaves and gave them to the disciples to set before the crowd.

17And they all ate and were satisfied. And what was left over was picked up, twelve baskets of broken pieces.

Jesus and his apostles had just arrived in an uninhabited area of ​​Beth Saida, to the North-East of Lake Galilee, looking for a time of rest and privacy to share together after the 12 apostles returned from the missionary round to which the Lord Jesus had sent them out not long ago, two by two.

But as would happen other times, the crowds that had heard him speak and heal the sick on the west side of the lake, when they knew where he was going, followed him, so much so that they arrived before Jesus and his apostles to the area where they were going.

Our Lord having an infinitely loving heart, took pity on them, because they were like 'sheep without a shepherd' (Mark 6:34) and not only gave them words of instruction and comfort, but healed their sick and also fed them, miraculously multiplying the five loaves and two fish that the apostles were able to get at that time

That day, the Son of God showed that his mercy is great and timely, having mercy not only on the spiritual state of men, but also on his physical condition and sustenance.

If they had stayed whole days in that place, it is most likely that Jesus would also have provided them with a roof and clothing, if necessary, just as he did centuries before for Israel in the desert.

But Jesus not only demonstrated to have this kind of infinite love for human beings, but also the power to achieve everything we need and He Himself intends.

In attending to them, he showed himself to be merciful and patient.

With his instruction, he proved to be the divine Teacher.

With his healings, he proved to be the Creator of the Universe.

By feeding them, he proved himself to be the Master of the Universe, and his abiding concern for the welfare of men.

With all this, he proved to be the Anointed of God, as the Scriptures prophesied, so much so that those present there wanted to make him King of Israel.