WHY CHRISTIANS PRAY FOR THE DEAD 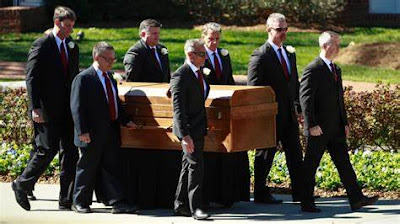 WHY CHRISTIANS PRAY FOR THE DEAD

Entrusting the dead to God has been an innate practice in humanity, born from their belief in another conscious life that follows the earthly one, and is present in all the religions of the world, both pagan and Abrahamic.

Jews pray for the dead (2Maccabees 12:38-46; Male Rechamin, Mourner's Kaddish), and so did Christians of apostolic times, following the Jewish practice and Jewish theology of life after death (2Timothy 1:16- 18; Tomb of Abercious of Hieropolis during the 2nd century; and Tertullian, during the 3rd century).

This is how it passed to all of Reformed theology, from Luther (Augsburg Confession, Book of Concord; Understanding The Prayer for the Dead: Its Foundation in History and Logic by James B. Gould), through Anglicanism (Book of Common Prayer of 1549 ; Book of Common Prayer of the Episcopal Church of 1979; "Prayers for the Dead" by Winfrid Oldfield Burrows) to John Wesley (Chapters on the Early Registers of Halifax Parish Church by Walter James Walker), and the practice even spread to other fringe sects like the Latter-day Saints (Mormons).

As the Reformation advanced among non-conformist groups and American denominations, the practice was eventually abandoned altogether, following the adoption of 'Once Saved, Always Saved' Theology, which became the cornerstone in the Evangelical movement throughout the world, beginning in the 18th century.

REASONS FOR THE REJECTION OF THIS PRACTICE

When the evangelical denominations were born, they continued to purify the teachings received from the Reformers, seeing them as incomplete due to their former Roman Catholic past. And in this spirit, they rejected the baptism of babies, confirmation, the need for the ecclesiastical ceremony of marriage for its validity, liturgies, special vestments, etc; and among them, the prayers for the dead, arguing that this practice was based on the Roman doctrine of Purgatory and that the destinies of each human being were already defined from the moment of their death, whether for salvation or damnation, depending on having done or not the 'Sinner's Prayer'. And under this logic, little by little the practice of commending the dead to God was considered to be a heretical and sinful practice.

Jewish Theology shows an evident evolution from the writings of the Torah, to the Babylonian period, with the Prophets, and therefore, some argue that the Jewish practice of praying for the dead stems from a corruption taken over from the Babylonian and Greek periods. However, the logic behind this practice is consonant with the theology of Judaism as seen in Scripture. If it were a pagan addition, it would be incongruous.

The Jews believe that the dead are in the Scheol, or Hades, and that the final destiny of all humanity, which will be decided on the day of Resurrection, can be altered until that day comes (Daniel 12:2; Isaiah 26 :19). This is the reason why they pray for their dead, which according to Torah theology, this idea is possible, however it is not complete.

From his parable of 'Lazarus and the Rich Man' (Luke 16:14-31) we can see that Jesus taught that the dead acquire their final state immediately after death, which assumes a prior judgment, for without judgment there is no sentence (Heb. 9:27).

Throughout the NT the idea is clear that there will be a Final Judgment, after the General Resurrection of the Dead, and whose result will be eternal and unappealable (Matthew 7:22-23; 25:41; Luke 13:25; Revelation 20: 11-12; John 5:28-29, and many others); but there is no mention of any Personal Judgment, which we nevertheless deduce it must exist for the final destinies of the dead to be decided, unless the post-mortem place is not permanent, and only until after the Resurrection and Final Judgment is their final fate decided.

We know that the Just will rise in Glory 1000 years before the Final Judgment and that their salvation is assured since then, and thus also the perdition of all those who do not rise until after the Millennium, which we know will be only for condemnation (Revelation 20:4-6; 12,15).

The Bible does not give many details about it, but it makes it clear that it is 'impossible to cross over from the side of the wicked to the side of the righteous' after death:

"And in addition to all this, there is a great gulf placed between us and you, so that those who want to cross from here to you cannot, and neither can anyone cross from there to us."

It is clear therefore, that the final destiny of the dead cannot be changed after their Personal Judgment, which must exist so that we can be eternally saved before the Final Judgment.

The reason why the Final Judgment has so much mention in the NT, it is because it will be an official, universal and public event, but nevertheless, the destinies of all, reprobates or not, is already fixed before this moment.

WHY WE PRAY FOR THE DEAD

The modern idea of ​​'Once Saved, Always Saved' IS NOT CHRISTIAN DOCTRINE. It has never been.

It is necessary to prove our Faith with a conduct according to the Will of God, which proves our New Birth, our Regeneration by the Holy Spirit. And we must remain with this faith, alive and active, until the end of our lives.

But that will not happen in the one who sins with pleasure and justifies his sin because he does not have the Holy Spirit within himself.

For this reason, even when it comes to people active in the Church and who profess Christianity, and apparently meet all the requirements to be considered saved; this is something that really only GOD knows.

These are the ones Jesus was referring to when he said 'Not everyone who calls me Lord, Lord, will enter the Kingdom of God' (Matthew 7:21)

Not knowing then who will be truly saved, but that we all will be judged before God, we ask God to mercifully judge all deceased Christians, whether they appear holy to our eyes or not.

For this reason Paul wished that a Christian as consecrated to God as Onesiphorus, could receive mercy on 'That Day', and never assumed that he was in Glory (2Timothy 1:16-18).

There is no place for presumption of salvation in Christianity. It is something that is reached at the end of the race and never before. That is what we fight for every day. That is the Theology of the Cross.

We Christians pray for the dead not because we believe in 'purgatory' or because we are trying to 'change anyone's final destiny'.

We pray that God's Judgment will be merciful to our brothers who have gone give account for their actions.

Their destiny will be decided by their faith and what they have done in this life. They can do nothing after death, not even repent. But their final destiny depends entirely on the Mercy of God.

It is only the Church on Earth, who can intercede for God's mercy based on the merits of Christ, and never based on our merits, because we cannot offer anything of ourselves either, except prayers for the salvation of our brothers in based on the Sacrifice of Lord Jesus on the Cross.

We do not know when the Judgment of each person will occur, because time is different in the spiritual world, that here on earth. We only ask for mercy for those who have departed in the Name of Jesus and we always commend them to the mercy of God.

As long as we know that we cannot change their final fate after being sentenced, praying for the deceased is according to God's Will to pray for each other, which also reflects our love for the departed.

Any other reasons apart from these, it is not part of our Christian Faith.