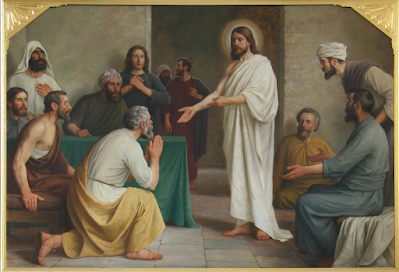 THE UNBELIEF OF THOMAS

Now Thomas, one of the twelve, called the Twin, was not with them when Jesus came.

25So the other disciples told him, “We have seen the Lord.”

26Eight days later, his disciples were inside again, and Thomas was with them.

Although the doors were locked, Jesus came and stood among them and said, “Peace be with you.”

27Then he said to Thomas,

“Put your finger here, and see my hands; and put out your hand, and place it in my side. Do not disbelieve, but believe.”

28Thomas answered him, “My Lord and my God!”

29Jesus said to him, “Have you believed because you have seen me? Blessed are those who have not seen and yet have believed.”

This was the second occasion when our Lord appeared to all his disciples in the what was most probably the upper room, the same place they observed the Paschal meal and received the Holy Spirit in Pentecost (Acts 1:13-14).

That day, from all the disciples present, which included men, women and children apart from the Apostles, Thomas ‘The Twin’ was not present there.

He did not see Lord Jesus resurrected, neither ate fish with Him when Jesus appeared the first time to his followers (John 20:19), but when Thomas was told about it, he openly and redundantly declared his lack of faith in the resurrection of our Lord (John 20:25).

This was clearly the reaction of a man disappointed in the ministry of Jesus. Deep in his heart Thomas may have hoped that Jesus would come up victorious from the confrontation with the Jews and the Romans, and would have started to claim power and the throne of David for Himself, exactly what most Jews expected from the Earthly Messiah. But when He say Jesus crucified, he lost faith, and when finally, Jesus died and was buried, Thomas abandoned his faith, but without forsaking his personal friendship with the other 11 Apostles, that took him back to that room that day.

In his infinite mercy, and not wanting to lose any of the Eleven Apostles to Satan as He said before (John 18:9), Jesus appeared again to all of them, and in this occasion Thomas was there.

Lord Jesus immediately directed Himself to Thomas and asked him to touch his wounds of crucifixion and believe.

Thomas had sinned greatly when he declared his unbelief; because that is what his declaration meant. In other words, Thomas said:

“Unless I see Him, and touch Him, and make sure He is really Him and not a hallucination, I won’t believe He is alive”

And that is exactly what our Lord Jesus Christ did with Thomas. Jesus confirmed Thomas’s calling and faith, and encouraged him to persevere, not before blessing those who have enough faith to believe in Him, without seeing.

But Thomas had seen the miracles of Jesus. He was there when He healed the lame, made the mute speak, the deaf listen, and the blind see.

Thomas had cast out demons and healed the sick in the Name of JESUS when the Apostles got sent in twos; and had also seen Jesus resurrect the death, especially Lazarus; and even then, he doubted the capacity of coming back to life, from the one who brought others from death into life again

Thomas had no excuse to do not believe. But he did.

Only Lord JESUS in his infinite mercy, decided to confirm his faith by appearing to him. This act of mercy and love, must have touched Thomas so deeply, that in awe for what he saw and heard, and realizing his sin, he proclaimed “MY LORD AND MY GOD”.

In this emotional surprise, he was driven by the Holy Spirit, to proclaim the deity of his Master, and acknowledge Him, as his Lord and God, on a personal level.

Thomas taught us a lesson, all of us who were born afterwards without having seen Jesus in the flesh, but trust in the testimony of the Apostles and on those privileged people in history, to whom our Lord Jesus has appeared. And makes us feel well, considering the blessing that our Lord Jesus Christ gave to those who ‘believe without seeing’