THE CRUCIFIXION OF JESUS 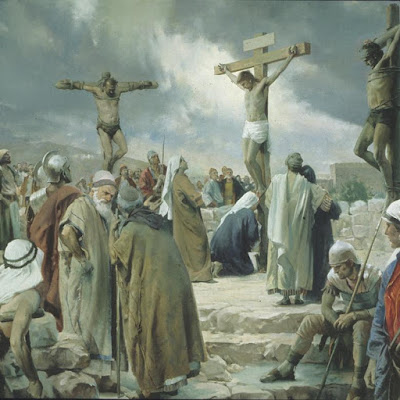 THE CRUCIFIXION OF JESUS

21And they compelled a passerby, Simon of Cyrene, who was coming in from the country, the father of Alexander and Rufus, to carry his cross. 22And they brought him to the place called Golgotha (which means Place of a Skull).

23And they offered him wine mixed with myrrh, but he did not take it.

24And they crucified him and divided his garments among them, casting lots for them, to decide what each should take. 25And it was the third hour when they crucified him. 26And the inscription of the charge against him read, “The King of the Jews.”

27And with him they crucified two robbers, one on his right and one on his left.

29And those who passed by derided him, wagging their heads and saying, “Aha! You who would destroy the temple and rebuild it in three days, 30save yourself, and come down from the cross!”

31So also the chief priests with the scribes mocked him to one another, saying, “He saved others; he cannot save himself. 32Let the Christ, the King of Israel, come down now from the cross that we may see and believe.”

Those who were crucified with him also reviled him.

33And when the sixth hour had come, there was darkness over the whole land until the ninth hour. 34And at the ninth hour Jesus cried with a loud voice, “ELOI, ELOI, LEMA SABACHTHANI?” which means, “My God, my God, why have you forsaken me?”

35And some of the bystanders hearing it said, “Behold, he is calling Elijah.”

36And someone ran and filled a sponge with sour wine, put it on a reed and gave it to him to drink, saying, “Wait, let us see whether Elijah will come to take him down.”

37And Jesus uttered a loud cry and breathed his last.

38And the curtain of the temple was torn in two, from top to bottom.

39And when the centurion, who stood facing him, saw that in this way he breathed his last, he said, “Truly this man was the Son of God!”

The narrative of the arrest and execution of Jesus of Nazareth under penalty of crucifixion, the vilest form of Roman execution reserved only for murderers and rebels against the Emperor, is carefully detailed in the four canonical gospels, thus being proof of the great importance that this event had for first-century Christians.

The narrative of the crucifixion varies in some details between the four gospels, each of the authors focusing on different aspects of the same event, each emphasizing the points they considered crucial. However, they all complement each other and never contradict one another.

These variants are the following:

1 – Mention of the children of Simon of Cyrene

3 – Only mention of the last drink

7 – Request for forgiveness for the executors

13 – Does not mention the darkness of 3 hours

16 – Into your hands I commend my spirit

Taking all these things into account, we can have a total picture of the events, step by step of how they happened, and can clearly see the lessons that our Lord left us with it.

JESUS ​​went to the cross resolute and sure of his mission and purpose, out of love for the human race.

Although the night before he suffered in Gethsemane, facing his prompt arrest and execution, however, not even sweating blood did he surrender to his humanity, but in the midst of all the anguish he asked GOD the Father, to do his will, and let his atoning sacrifice go forward, and said, “THY will be done, AND NOT mine” (Matthew 26:39).

With this same courage, he recognized that he could be saved from his arrest with divine help (Matthew 26:53), yet he did not use this power to free himself neither from Pilate nor Herod, nor from his imminent death either. Jesus died under his full and free consent.

Jesus did not accept the mixture of wine and myrrh, which was used to anesthetize the ones to be executed, but rejected it and decided to suffer every second of his passion and death, in complete control of his senses (Mark 15:23).

Jesus loved humanity to the end, for whom he accepted to die this day, and asked God for forgiveness for his executors, mentioning their ignorance of the true identity of Jesus and what they were doing (Luke 23:34 ).

Jesus converted with this act of mercy in favour of his executors, one of the thieves crucified with him, and to whom he promised eternal salvation through his Faith and Repentance.

JESUS ​​could have escaped this death if he had wanted to, but he did not, driven by his love for us, since a perfect and eternal expiatory offering was necessary to be able to compensate for the sins of all humanity, from Adam to the last unborn man and woman. Not only because of the corruption inherited from Adam, but also because of the fruits of this corruption, expressed in our personal faults. Only JESUS, being human, could represent our nature, and only being GOD could give value to his human life, so that it reached not only for one person, or even vicariously for all humanity because of the Adamic fall, but also to the personal guilt. of each one of us, of which each person is responsible.

And thus He made his death a true perfect expiatory offering to God the Father, on behalf of all humanity, past, present and future; based on his human innocence and divine nature.

Jesus felt this in his own humanity, when he agonized over the spectre of death. The dark effect of sin, from which as a human He was legally free, however, he carried it out in his perfect and holy determination (Matthew 26: 38-39; Luke 22: 43-44).

He also felt it even more, when while carrying the sins of the whole world on his human shoulders, the presence of the Father departed from the man Jesus, who is the one who died for us, without his divine part ever being affected by this ignominious burden, since as GOD, JESUS was still alive, eternal and almighty. This is why He cried out, “FATHER WHY HAVE YOU FORSAKEN ME” (Mark 15:34).

FINALLY, when the propitiatory act was complete, and after commending his humanity to the Father (Luke 26:46); he said, "IT IS FINISHED" and departed from his body (John 19:30).

THE GREATEST LESSON OF THIS EVENT is the Love of the entire Holy Trinity in the process.

The Love of the Father, by allowing his beloved Son Jesus to give his life for us, without having to, except the desire that we should not be lost for all eternity.

The Love of Jesus, of agreeing to take on humanity, with all the limitations that this implies, being Himself the Creator of it, and assenting to the suffering and death that awaited him unfairly, but which He accepted in his desire not to let us suffer forever the punishment of the Lake of Fire.

The Love of the Holy Spirit, which comforted the humanity of Jesus all the time, so that he would not faint, because even being faithful to God and resolute in his determination, as a man, he could have died before of a heart attack, or fainted from anguish, or he could have been dishonourably abused by the immoral men who tortured him and nailed him to the Cross in the presence of his mother. But no.

And that is why now, we can say together with the apostle, that the forgiveness of sins and salvation are within the reach of all those humans, who with Faith and Repentance, welcome themselves at the feet of Christ, being born again, from sinners to children of God.

"For God so loved the world that he gave his only begotten Son, so that everyone who believes in Him may not perish but have eternal life."