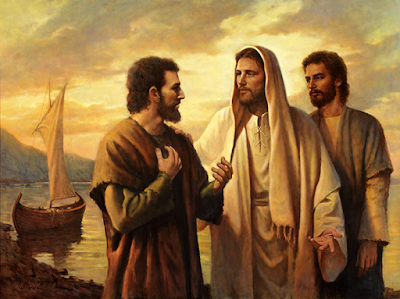 15When they had finished breakfast, Jesus said to Simon Peter, “Simon, son of John, do you love me more than these?”

Peter was grieved because he said to him the third time, “Do you love me?” and he said to him, “Lord, you know everything; you know that I love you.”

Jesus said to him, “Feed my sheep.

18Truly, truly, I say to you, when you were young, you used to dress yourself and walk wherever you wanted, but when you are old, you will stretch out your hands, and another will dress you and carry you where you do not want to go.”

This event happened during the time Lord Jesus appeared to his disciples in Galilee, as He commanded them (Matthew 28:10).

On this particular occasion only seven of them were present; Simon, Thomas ‘The Twin’, Nathanael, John and James his brother, and two other disciples not mentioned.

The fact that two names are not mentioned, and that Nathanael was not an Apostle, suggests that not only the 11 Apostles were present at the top of the mountain when Jesus gave them the Great Commission (Matthew 28:18), but more people, including the disciples that lived in Galilee that were not present in Jerusalem during the crucifixion, and most probably even the 500 that Paul spoke about in First Corinthians 15:6, were also there.

As our Lord was appearing and disappearing and never staying for a long time as He used to do before his death, the Apostles went back to their everyday lives, but this time with faith, born again, and expecting instructions from their Lord, until his ascension, and the same happened with all his disciples.

That morning they did not expect to see Jesus.

They had been working all night, as fishermen do to have their product ready in the market by the morning. But they had caught nothing, and was already late, daylight had beginning to appear (John 21:4), when they saw a fellow fisherman passing by on the shore, who asked them if they had any product. When they said that they had none, their friendly apparent fisherman told them to try the other side of the boat, and that for sure they will catch something.

The disciples followed the advice of the man, which indicates they assumed him to be a fellow fisherman, not a buyer, since he already knew where the fish were. How great must have been their surprise when immediately their net was full!!

It wasn’t the first time Jesus did this. He also filled their fishing nets when He called Simon, John and James for the first time, three years ago (Luke 5:1-10). This time ‘the Disciple whom Jesus loved’, was there, whom we assumed must have been apostle John, or another of the two disciples whose names are not mentioned, that remembered this immediately, since this success wasn’t natural, and told Simon, that that man was not other but LORD JESUS (John 21:7).

Finally, all gathered together with the Lord and had their morning meal with Him, sharing fish and bread, that literally was fully provided by Jesus on this occasion (John 21:9).

JESUS asked three times Simon if he really loved Him more than that everyday life he had chosen, because of the nature of the sacrifices he would endure if he decided to follow Jesus as an Apostle of his.

Most people assume the Lord was asking Simon if he loved Him more than the other disciples loved Him.

Jesus was a caring man, and He rejected several times categorizing his disciples, a thing left to the Father alone (Mark 10:40).

Even more, there was ‘the Disciple Whom Jesus loved’, whom it is only logical to assume that he was the one who really loved our Lord the most.

JESUS did not underscore the love of his other disciples, but He referred to the life Simon-Peter was living, in comparison to the three years of preaching and sacrifice he already had lived as an active disciple of Jesus.

Jesus asked Peter this, as a restauration act of a man who the last time He saw, had just denied Him in public three times and under oath on the eve of his execution (Matthew 26:74). In his mercy, our Lord permitted that Simon re-professed his faith and love for Christ, in front of Him, and his truthfulness is confirmed by his words ‘You know everything. You know I love you’ (John 21:17).

Jesus commended Peter the care of his flock, ‘Feed my Lambs. Feed my Sheep’, which he commended him after declaring that he did love Jesus more than what he had considered lovable in his life to that point.

Some take this as an appointment of greatness for Simon, that places him like a father and overlord on all the Christian community. But there is nothing here that may suggest that.

Simon was asked three times if he loved the Lord, for each time he denied Him on the day of his trial before the Crucifixion. And he was asked to feed his disciples, big and small, which implies that Peter was officially re-admitted into the quorum of the 12 apostles (11 only at the time), sharing the same command He gave them in Galilee, at the Great Commission.

His almighty power as a PROVIDER.

His infinite LOVE for us all.