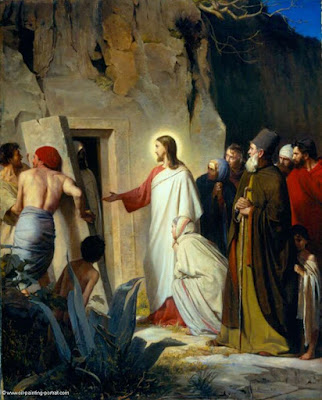 38 Then Jesus, deeply moved again, came to the tomb.

It was a cave, and a stone lay against it. 39Jesus said, “TAKE AWAY THE STONE.”

Martha, the sister of the dead man, said to him, “Lord, by this time there will be an odor, for he has been dead four days.”

40Jesus said to her, “DID I NOT TELL YOU THAT IF YOU BELIEVED YOU WOULD SEE THE GLORY OF GOD?”

41So they took away the stone. And Jesus lifted up his eyes and said,

“FATHER, I THANK YOU THAT YOU HAVE HEARD ME.

42I KNEW THAT YOU ALWAYS HEAR ME, BUT I SAID THIS ON ACCOUNT OF THE PEOPLE STANDING AROUND, THAT THEY MAY BELIEVE THAT YOU SENT ME.”

43When he had said these things, he cried out with a loud voice, “LAZARUS, COME OUT.”

44The man who had died came out, his hands and feet bound with linen strips, and his face wrapped with a cloth.

Jesus said to them,

This event occurred during the last trip of Lord Jesus to Jerusalem before his crucifixion, in the locality of Bethany (John 11:1,18).

It is evident that Lord Jesus expected this to happen. Apart from been omniscient, He deliberately let a few days pass from when He was told for the first time that Lazarus’ life was in danger, ensuring that Lazarus was dead before He went to Bethany

But Jesus did not do this for lack of love towards Lazarus, or negligence, but He wanted Lazarus to experience death, in order to prove GOD’s power over it, the same death He would experience two weeks from then.

When our Lord arrived to the tomb, after being deeply sadden by Lazarus’s death (John 11:35), He elevated a prayer to the Father, thanking Him for always listening to Him.

However, Jesus clarified that He prayed aloud so that the people listening to Him came to know that the miracle He was about to perform and they were about to see; it was an act under the power of God Almighty, and by this, leave a final testimony of the validity of his claim as Messiah and Son of God to all humanity before his departure from his earthly life.

By praying to God the Father in a loud voice, Jesus gave the glory to GOD YHWH, the God of Israel; thus guaranteeing the divine origin of his power.

By bringing back to life someone who was already in state of decomposition, Jesus demonstrated his power to overcome death and confer life beyond any doubt. Nobody could claim catalepsy, or falsehood with a decomposing body involved.

And by calling Lazarus from death to life, by his single command, without any ceremony or special liturgical prayer or mantra, in his own Name, JESUS proved to hold the power of God in Himself, to the point of not needing any special ritual or effort on his part to overcome death and bring back life, a thing that not even Satan could copy among his ample repertory of fake miracles.

But above all, JESUS gave skeptics the opportunity to repent and believe in Him; and those who already believed in Him, the hope of the resurrection, especially when in two weeks more, they will see Him crucified and buried.