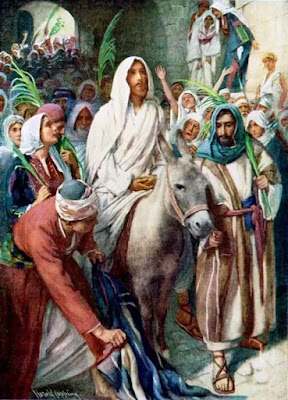 1Now when they drew near to Jerusalem and came to Bethpage, to the Mount of Olives, then Jesus sent two disciples, 2saying to them:

“Go into the village in front of you, and immediately you will find a donkey tied, and a colt with her. Untie them and bring them to me.

3If anyone says anything to you, you shall say, ‘The Lord needs them,’ and he will send them at once.”

4This took place to fulfill what was spoken by the prophet, saying:

5“SAY TO THE DAUGHTER OF ZION,

‘BEHOLD, YOUR KING IS COMING TO YOU, HUMBLE, AND MOUNTED ON A DONKEY, ON A COLT, THE FOAL OF A BEAST OF BURDEN.’”

6The disciples went and did as Jesus had directed them. 7They brought the donkey and the colt and put on them their cloaks, and he sat on them.

9And the crowds that went before him and that followed him were shouting:

“Hosanna to the Son of David!

Blessed is he who comes in the name of the Lord! Hosanna in the highest!”

10And when he entered Jerusalem, the whole city was stirred up, saying, “Who is this?”

11And the crowds said, “This is the prophet Jesus, from Nazareth of Galilee.”

We don't know for sure what day this happened. The Bible is not specific about the date, but we only know that he arrived at the town of Lazarus "six days before Easter" (John 12:1), where they gave him a welcome party for the miracle of the resurrection of Lazarus. And we know that this entry occurred the next day (John 12:12-13). The only conclusion we can draw from this is that neither the feast day of Bethania, nor the triumphal entry the next day, was a Sabbath. The closest thing to assuming that the Lord entered Jerusalem on a Sunday is to think that the party took place at the end of Saturday, starting at 6pm, in the house of Lazarus, where he was anointed by his sister Mary (John 12 :3), which is not to be confused with the other anointing that Jesus had in the house of Simon 'The Leper' immediately before the Passover Supper (Matthew 26:6-7).

Jesus sent for a donkey with its colt, and he entered riding on the colt, while the donkey carried his belongings to the royal city of Jerusalem.

Despite the three years of preaching and portents that Jesus demonstrated to the Jews, due to the recent and public resurrection of Lazarus, the most spectacular miracle of Jesus, this time the crowds came out to receive him with joy, calling him Messiah, saying :

BLESSED IS HE WHO COMES IN THE NAME OF GOD!”

Due to the resurrection of Lazarus (John 12:9-11), many now accepted Jesus as the promised Messiah, and so cried out for him, perhaps hoping that he would restore Israel's independence and a Messianic golden age.

It is, in these two things that the prophecy of Zechariah 9:9, quoted freely from memory, or perhaps from some version now lost, was fulfilled. But this event was a confirmation of the Messianic claim of Jesus, according to the Hebrew prophecies about the savior King that was to come.

BUT these same people who now acclaimed him as their King, days later many of them would be shouting in front of Pilate: 'CRUCIFY HIM'!!.

THESE people thought that JESUS ​​was the Messiah they thought he should be. An earthly King, politician and warrior like Moses, Joshua or Gideon, who would come to restore the earthly Kingdom of Israel forever. Seeing that the Messiah was a spiritual King, whose kingdom was tangible, but started from the conversion of the heart of every human being who followed him; in a few days they denied his messiahship, and full of disappointment, they would ask for the death of their own King, Jesus, who was their legitimate King for having royal blood from the House of David.