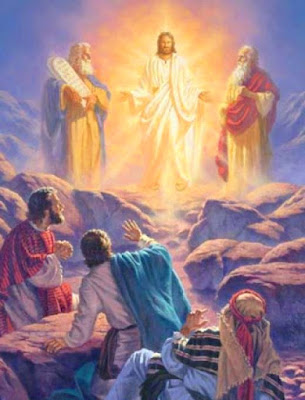 28Now about eight days after these sayings he took with him Peter and John and James and went up on the mountain to pray.

29And as he was praying, the appearance of his face was altered, and his clothing became dazzling white.

30And behold, two men were talking with him, Moses and Elijah, 31who appeared in glory and spoke of his departure, which he was about to accomplish at Jerusalem.

32Now Peter and those who were with him were heavy with sleep, but when they became fully awake, they saw his glory and the two men who stood with him.

33And as the men were parting from him, Peter said to Jesus, “Master, it is good that we are here. Let us make three tents, one for you and one for Moses and one for Elijah”—not knowing what he said.

34As he was saying these things, a cloud came and overshadowed them, and they were afraid as they entered the cloud. 35And a voice came out of the cloud, saying, “THIS IS MY SON, MY CHOSEN ONE; LISTEN TO HIM!”

36And when the voice had spoken, Jesus was found alone. And they kept silent and told no one in those days anything of what they had seen.

About a week after Jesus had fed the crowd of four thousand men (Mt 15;17; Mr 8;9; Lk 9) and Simon – Peter had acknowledged him as the Messiah and the Son of God (Mt 16; Lk9); Lord Jesus was about to revealed his truest identity to those men who were his closest confidents, especially Peter, whom had recognized Him as the Son of God.

We do not know what mountain was the one where Jesus took his disciples on that occasion. The idea that it is mount Tabor is purely based on traditions from early Christians, and other places have also been suggested, but the truth is that we can only guess. But what is certain is that it was in Caesarea Philippi (Mt 16:13; Mr 8:27), on the far North-East part of Galilee, and that it was a desolated high hill accessible on foot not long from the ground (Mt 17:1; Lk 9:28)

Lord Jesus always took these three apostles, Simon, James and John, who had been chosen by pure grace, in order to shape them, into the solid group that would sustain the others (Galatians 2:9).

Another reason was that these three would be a number reduced enough to keep a secret for an appointed time. If more were accepted into these revelations, it would have been easier to have been made public before time.

It was late. After a hard day in the hot Palestine, and after climbing a hill after all, the disciples were tired, and so they fell asleep. They also fell asleep the night when our Lord was arrested in Gethsemane. Not because of lack of interest or respect. They knew what was at the stake; but they were human, and they were tired. They did not lie there to sleep. They fell asleep unnoticed.

Suddenly, the luminesce of the transfiguration woke them up, and the first vision caught them in a trance in the Holy Spirit, so much that even though they were fully awake, they were spiritually raptured in stupor, since they were not thinking what they were saying (Luke 9:33).

Without anyone telling them, they knew that the two men standing on the sides of Jesus were Moses and Elijah. Infused cognition is a common experience among those who have suffered altered states due to rapture or ectasis in the Holy Spirit.

The scene they saw, it was greater than the apparition of the burning bush to Moses and God’s presence. LORD JESUS was fully shinning with a potent light described to be as bright as the Sun at its peak radiance (Matthew 17:2; Mark 9:3; Luke 9:29). He alone was radiant, in comparison to Moses and Elijah who stood in glorious but not radiant form next to Jesus.

The vision made manifest the divinity of Jesus who became radiant alone, in comparison to the other two prophets who seemed glorified but not to the grade of Jesus.

They stood on the sides of Lord Jesus, being the figure of the Savior radiant and central among the three of them. This indicated the supreme authority of GOD JESUS, the LOGOS, over the whole Law and Prophets, personified in Moses and Elijah, as subjected and dependent of Him.

JESUS revealed that day his divinity and authority over the religion these apostles had believed all their lives, letting them know that his word was above them all, because it was the Word of GOD.

As they were seeing this vision, a divine cloud came around them, and they feared. But GOD the Father, the same as in the day of Jesus’s baptism, came to them declaring:

“This is my beloved Son, with whom I am well pleased; listen to him.”

The GOD of the Law and Prophets, the God of Moses validated the vision and divine status of JESUS.

They did not understand the difference or unity between the GOD FATHER and GOD SON. That is why the NT expresses itself in those terms. But it was not necessary. That day, they descended more convinced than ever before, that Jesus was really the literal only begotten born of GOD, and that Jesus was as divine as the God of their fathers, and that they had one single purpose.

They kept it to themselves. Not even the others found out about this, only after his ascension to Heaven. And served as testimony for all mankind.