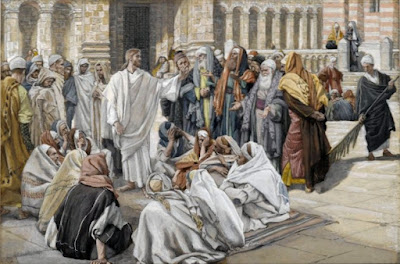 1There were some present at that very time who told him about the Galileans whose blood Pilate had mingled with their sacrifices. 2And he answered them,

“Do you think that these Galileans were worse sinners than all the other Galileans, because they suffered in this way? 3No, I tell you; but unless you repent, you will all likewise perish.

4Or those eighteen on whom the tower in Siloam fell and killed them: do you think that they were worse offenders than all the others who lived in Jerusalem? 5No, I tell you; but unless you repent, you will all likewise perish.”

6And he told this parable:

“A man had a fig tree planted in his vineyard, and he came seeking fruit on it and found none. 7And he said to the vinedresser, ‘Look, for three years now I have come seeking fruit on this fig tree, and I find none. Cut it down. Why should it use up the ground?’

8And he answered him, ‘Sir, let it alone this year also, until I dig around it and put on manure. 9Then if it should bear fruit next year, well and good; but if not, you can cut it down.’”

On this occasion, our Lord was speaking with the crowd, most of whom were curious and ignorant of the knowledge of God, and among them were some Pharisees who sought not to learn, but rather to find an error in the Master's teachings and thus condemn him either to life imprisonment or to death. (See chapters 11 and 12).

After instructing them in matters of faith and morals, Jesus gave them a warning of the need to truly convert to God, to turn their lives around drastically and permanently, under penalty of falling into the punishment of those who are enemies of God

Jesus mentions two events not cataloged by any known historian until today. The people around him spoke of an occasion where Governor Pilate, the same one who condemned the Lord to crucifixion, killed certain Galilean believers during or moments before or after they had offered their sacrifices to God in or near the Temple.

The Lord also adds this time, and not the people, another occasion where a column fell from the pool of Siloam (John 9:7) and killed several.

JESUS ​​declares that these people were no worse than those who now listened to him. In fact, the sense of his words implies that they were neither better nor worse than the average person, but both groups died under violent circumstances.

Considering that the first group died in connection with the Temple sacrifice, and that the pool of Siloam was used as a common social washing place, it is likely that these people were better off than most who now listened to the Lord.

Although in itself, the Galileans were considered the most violent among the Jews, to erase this idea from the minds of his listeners, Jesus mentioned the case of the tower of Siloam, in Jerusalem, where it was people from Jerusalem and not Galileans who died.

But the Lord adds, without clarifying the reason for their death, thus avoiding feeding their own imaginations and justifications used as excuses, and without saying whether they died accidentally or by divine punishment, he said that everyone who lives outside the will of God, would also die like these, not referring to the violent way, but to death itself, just as these people saw the end of their lives, in these two tragic events.

Jesus also proceeded to tell them a parable, where a landowner is tired of not having fruit from a fig tree that he had planted in his orchard, and tells the caretaker to uproot it. In this story, the caretaker asks the owner for one more year, to fertilize the tree and take care of it, and so it can perhaps bear fruit the following year and save its life, otherwise it would be cut down (v.6-9).

Clearly with these two stories, Lord Jesus made it clear to his listeners, that it was the mercy of God that kept them alive, as well as all of us, in this time of Grace, where JESUS ​​himself in the caretaker of the garden of God, the world, and that now is the time of Grace that awaits our conversion to God, through Christ, and thus save our lives from eternal damnation, much worse than the death of the Galileans and those who died crushed by the tower; and that if we underestimate this opportunity for mercy, we will truly be lost forever, beyond the mercy of God, once the period of waiting that God has granted to the world is over.

Although, on this occasion Jesus speaks to the unconverted Jews, who sealed their condemnation with their rejection of Him as Messiah (John 8:24); the same principle applies to all of us, throughout the world, if we do not turn to God, through Christ.