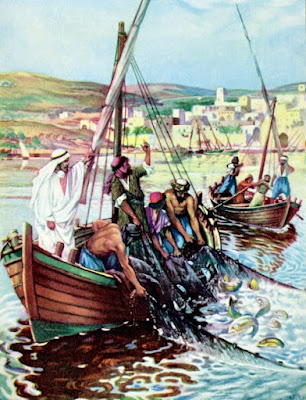 1On one occasion, while the crowd was pressing in on him to hear the word of God, he was standing by the lake of Gennesaret, 2and he saw two boats by the lake, but the fishermen had gone out of them and were washing their nets.

3Getting into one of the boats, which was Simon’s, he asked him to put out a little from the land. And he sat down and taught the people from the boat.

4And when he had finished speaking, he said to Simon, “PUT OUT INTO THE DEEP AND LET DOWN YOUR NETS FOR A CATCH.”

5And Simon answered, “Master, we toiled all night and took nothing! But at your word I will let down the nets.”

6And when they had done this, they enclosed a large number of fish, and their nets were breaking.

7They signaled to their partners in the other boat to come and help them. And they came and filled both the boats, so that they began to sink.

8But when Simon Peter saw it, he fell down at Jesus’ knees, saying, “Depart from me, for I am a sinful man, O Lord.”

9For he and all who were with him were astonished at the catch of fish that they had taken, 10and so also were James and John, sons of Zebedee, who were partners with Simon.

And Jesus said to Simon, “Do not be afraid; from now on you will be catching men.”

11And when they had brought their boats to land, they left everything and followed him.

The story about how Lord Jesus called his disciples is told in the four gospels from different angles that need to be put together to have a clear picture of this event. However, it seems to be that Andrew, Simon’s brother together with an unnamed follower of John the Baptist (John 1:35-36, 40), Simon himself, and his business partners, James and John, were the first five disciples of our Lord (Luke 5:10-11).

Our Lord’s fame was beginning to increase even from the very first moment He came back from the desert, after his baptism; and once He came back to preach in his homeland of Galilee, not the place where He was born, since He was born in Bethlehem, Judah; He was followed by many people who had never seen anyone preach like Him, or do the miracles He did (Luke 4:43).

In this occasion, many people followed Him into the shore of the lake, so much that unless our Lord elevated Himself above ground, it was impossible to be seen or heard by all (Luke 5:1).

Even though that day our Lord told Peter and his companions that they will become ‘fishers of men’, that was not the first time they believed in Him or knew Him.

Andrew had already introduced our Lord to his own brother and immediate circle of friends, so much, that days before our Lord stayed at Peter’s home and healed his mother-in-Law.

This day, our Lord requested the favor from Peter to allow Him into his boat to take safe distance from the crowd, and thus, being able to preach to them.

Once this was done, Jesus returned the favor with the blessing of the fish, giving not only Peter, but also Andrew, James and John a reward for their empty nets from the night before, when they failed to catch any fish. And He did it in an overwhelming manner.

Peter, surprised for this portent, was moved to humbleness in front of the power he had in front of him, and said “Depart from me, for I am sinful man Oh Lord”. Jesus comforted him, and said, “from now on you will be catching men”.

Scripture says that from this day, they left everything and started to follow Him literary for the rest of their lives.

Jesus demonstrated this day, his great mercy and concern for our necessities always.

He consoled the ones who came looking for Him.

He gave Peter, Andrew, James and John the income they needed but providing them with work.

Jesus was not a man that only takes, but gives back, and when He does, like He did this time with the fish, He does it perfect and in abundance; and He has something greater always for each of us.