THE CORRECT WAY TO CELEBRATE THE LORD's SUPPER 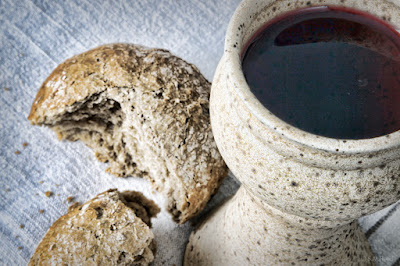 HOW WE SHOULD PARTAKE OF THE LORD’s SUPPER

The ceremony of the Lord’s Supper, as the NT calls it (1Corinthians 11:20,33), also known as Eucharist or Communion; it is a sacred ordinance left by our Lord Jesus for the benefit of his Church, together with Baptism and the Washing of the Feet, as a channel of Grace on all who participate of it with faith and devotion.

The ceremony is a memorial; that is a sacred re-enactment of the sacrifice of Jesus on the Cross, in remembrance of the time when He gave his body and blood for the forgiveness of our sins.

It is more than just a symbolic act, but a sacred reminder of the atonement, the apex of Jesus’s mission on Earth, together with his resurrection; that conveys sanctifying grace on all those who partake from the whole ceremony, not just the elements, with faith and devotion.

As it is an Ordinance, also known as Sacrament; its form and elements, must be maintained as described in Scripture, since all sacraments are divinely instituted, and not open for human manipulation or alteration.

We will briefly number the correct form to celebrate the Lord’s Supper:

HOW TO CELEBRATE THE LORD’s SUPPER

We need BREAD and RED WINE, since this is what is used in the ceremony of the Jewish Passover.

Even though the bread represents the solid body of our Lord and the wine his liquid blood, some think these can be replaced by biscuits or cakes and Juice or water, instead of the bread and wine used by our Lord.

Apart from being an unauthorized decision to changed the elements used by God Himself, it is to open door to the devil.

The changing of elements or form desecrates the ceremony, opening doors to abuse, since one alteration, leads to another, and thus, the devil will end up doing a burlesque ceremony instead Jesus’ command.

Lord Jesus could have used anything during the Last Supper; vegetables, meat, or any other; but He chose BREAD to symbolize his body. Bread must be used, unleavened, as this was the type of bread used by our Lord.

We must remember that a ‘memorial’ of the Supper, includes, as much as it is possible, an exact re-enactment of the historical event. That is why in the beginning, the Lord’s Supper was celebrated at the end of a real supper or Agape (1Corinthians 11:20-21)

Also red wine must be used, as this is the element used by our Lord at the Last Supper. The use of any other kind of liquid, having the possibility of using proper red wine, is a libertine action that implies more than disrespect towards God and the institution, but also an insult, specially in those who think of themselves as being ‘too holy’ or ‘holier than Christ’ , as to ingest fermented wine.

2 –ONE PIECE OF BREAD AND ONE CUP OF WINE.

As far as the Scripture is concerned, the ceremony was done from one piece of bread that symbolizes the ‘ONE BODY’ of our Lord, given for us. And also, the use of one cup, as the ‘SOLE SOURCE’ for the fountain where this blood came from, the blood of the Son of God.

The one piece of unleavened bread and the one cup used, but be broken by the celebrant or every member before ingesting, and the all drink from the same cup

This has a reason to be. The partaking of one piece of bread and one cup, declares the single source of our salvation, and our equal participation of this one source, making all the participants one in the person of Christ, whom this single bread and cup represent. ONE CHRIST, ONE BREAD, ONE CUP.

The division of biscuits or crackers and different cups, loosens the nature of the ceremony, apart from being a human unauthorized change, based on fear of contracting sicknesses while performing this sacred ceremony.

3 – BREAD AND WINE MUST BE CONSUMMED

In his infinite knowledge, Jesus decided to separate the giving of his body and spilling of his sacred blood, represented by the bread and the wine.

Many, pretending to be more intelligent and profound than Jesus, have concluded that only bread could be enough, as it represents the body and blood included in it. BUT this again, is an unauthorized manipulation of the ceremony based on limit human opinion and not according to GOD.

JESUS celebrated the symbol of the atonement by using bread to represent his solid physical body, crucified on the cross; and wine, to remember the spilling of his blood. THIS IS because JESUS needed, as a sacrificial lamb, to spill his blood, not just die without the express spilling of blood. At the Passover, ceremony over which this sacrament is based on; the body was consumed, as the animal life has been taken, but his blood, was set separately over the doors’ posts.

The Lord’s Supper must be ingested in bread and wine.

4 – TAKE IT WITH FAITH AND DEVOTION

St Paul warns us about taking this sacred bread and wine with disrespect or in sinful state.

The bread and the wine represent the holy body and blood of our Lord; clean and pure.

We must partake from it with faith and devotion, thinking in what represents, and not thinking about something else, or looking at the legs or backside or other people, or thinking what time the service is concluding. This is the upmost disrespectful attitude and demand discipline.

Also, we must not receive the elements in sin. We must ask God for forgiveness, before we partake from them.

In some cases, brothers are involved into sins that are hard to leave, but we must have an attitude of repentance and desire to change, and never be complacent with our mistakes. These can also partake since the participation will confer the grace on us to procure the healing and holiness, we need to be able to overcome our weaknesses.

5 – WE MUST PRONOUNCE THE WORDS OF JESUS OR PAUL

That is an important part of the sacrament.

In humble obedience, we must pronounce the words of consecration as it is written in the gospels, or in 1Corinthians 11:23-26. Once this is pronounced with faith, the bread and the wine are consecrated to God. They are not current bread and wine. They become holy.

Alternatives words, are not allowed, since this also implies unauthorized manipulation of a divine institution.

6 – ALL MUST BE CONSUMED

As all bread and wine of the cup is consecrated, we must consume of all it. If anything is left behind, it is the celebrant’s duty to consume it all.

This is sacred bread and wine, and cannot be thrown out or be treated with disrespect in anyway.

To do that is a serious sin.

We must remember that these measures are applicable while the possibility to celebrate the sacrament as prescribed exists.

In cases where we cannot find the elements, or the place to celebrate it is not as stipulated, then we don’t have to perform it at all. The sacrament is a mean of sanctification, but not necessary for salvation.

HOWEVER, they are obligatory to be celebrated, Baptism, Lord’s Supper and Washing of the Feet, whenever it is possible, at least once per year. But in the case of Communion, once a week is the correct way, since it is intimate to the mystery of salvation.