THE BAPTISM OF JESUS 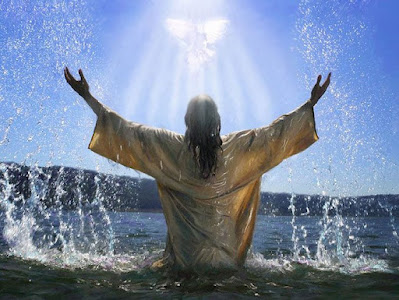 13Then Jesus came from Galilee to the Jordan to John, to be baptized by him.

14John would have prevented him, saying, “I need to be baptized by you, and do you come to me?”

15But Jesus answered him, “Let it be so now, for thus it is fitting for us to fulfill all righteousness.”

16And when Jesus was baptized, immediately he went up from the water, and behold, the heavens were opened to him, and he saw the Spirit of God descending like a dove and coming to rest on him; 17and behold, a voice from heaven said,

“THIS IS MY BELOVED SON, WITH WHOM I AM WELL PLEASED.”

When the time came for Lord Jesus to start his public ministry, He came all the way from Nazareth in the Norwest part of Israel to the eastern part of the Jordan river near Jerusalem, in Judea, near Bethania (John 1:28; Matthew 3:13) to be baptized by John.

John, his relative, knowing well who He was, refused at first to baptize Him, asking instead for Jesus to baptize him (Matthew 3:14) but our Lord, also knowing very well who He was and what He was doing, said to John that he should ‘Let it be so’.

Jesus went to John to acknowledge him as a prophet and to give validity to his ministry.

By giving validity to John’s ministry, Jesus approved all the warnings and announcements that the Baptist made about Him. And also, He redeemed all those who had taken John’s baptism of repentance, because all those sinners who tainted the clean waters of the Jordan with their sins, were now being made clean again by the perfect holiness of Jesus when He descended into the waters, without having to do so for the forgiveness of any sins.

With his holiness and intention, Jesus clean all those who had taken baptism by John.

BUT this was not everything.

When Jesus came up from the waters, suddenly the heavens opened up and God spoke to Him with a loud voice:

“This is my beloved Son, in whom I am well pleased”

While the Holy Spirit descended on Him in the shape of a dove.

This is the first time the Holy Trinity manifests Himself fully, being the second time during the transfiguration (Matthew 17:5) of Jesus.

On this occasion, LORD GOD YHWH, the eternal and all-powerful God of Abraham, recognized as such by all Israel; had manifested his own approval of the ministry of Jesus. Now the man Jesus of Nazareth was given God’s approval to preach and announce repentance and conversion, but not only that, He was announced to be ‘SON OF GOD’.

At this stage, this could mean just an approval of the Messianic claim of Jesus the man; but we know now God was also proclaiming Him, divine, of equal nature to Himself.

But the man Jesus of Nazareth, that in his human nature took the baptism of John, being divine Himself, nevertheless, God the Father anointed Jesus with the descend of the Holy Spirit.

The human Jesus of Nazareth was ready to his public ministry, with God’s approval and the anointing of the Spirit.

In this reading the author leaves two essential teachings:

1 – JESUS DID NOT LEARN his ministry from JOHN.

He came to John knowing better than the Baptist himself who He was and commanded John to baptize Him.

This rejects the heretical modern theory that says that the man Jesus learned his mission slowly from the Essenes and John the Baptist, or some other Hindu or Egyptian gurus. The Son of God, did not need any human teacher in matters of religion and the realization of his own mission, since He knew it from birth (Luke 2:49).

2 – The FATHER YHWH, JESUS and the HOLY SPIRIT, are three independent divine entities, and not one entity manifesting Himself in three different modes at different times.

This simultaneous manifestation of the Father from Heaven, the Son in the flesh, and the Spirit coming down on the Son separately from them, it is a proof of this. We are aware of them three, and we can only relate to the Trinity through these three forms.

But only by realizing that the divinity can not be multiple and can only be one in essence, we also know that is this invisible and unnamed God, whom Genesis calls Elohim - אֱלֹהִ֔ים (Genesis 1:26), is the God manifested as Father, Son and Spirit at the same time.

This debunks the heresy of modalism and Arianism, either who deny the reality of this triple manifestation, or deny the divinity of Christ.

From this day onwards, Jesus of Nazareth started this public ministry as the anointed Messiah, anointed not by man, but by God Himself.