JESUS PROCLAIMS HIMSELF THE MESSIAH 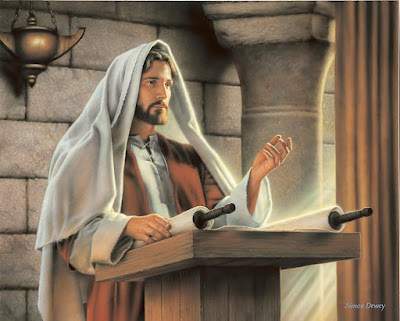 JESUS DECLARES HIMSELF TO BE THE MESSIAH

16And he came to Nazareth, where he had been brought up.

And as was his custom, he went to the synagogue on the Sabbath day, and he stood up to read.

17And the scroll of the prophet Isaiah was given to him. He unrolled the scroll and found the place where it was written,

18“The Spirit of the Lord is upon me, because he has anointed me to proclaim good news to the poor.

He has sent me to proclaim liberty to the captives and recovering of sight to the blind, to set at liberty those who are oppressed, 19to proclaim the year of the Lord’s favor.”

20And he rolled up the scroll and gave it back to the attendant and sat down. And the eyes of all in the synagogue were fixed on him.

21And he began to say to them, “TODAY THIS SCRIPTURE HAS BEEN FULFILLED IN YOUR HEARING.”

It had not been long since Jesus had begun his public ministry. This day was not the beginning, because he already preached repentance and the coming of the Kingdom of God (Luke 4:14-15), but it was the first day that he openly proclaimed Himself as the Messiah, before the official Judaism of the place where he had grown up and lived most of his life.

'As was his custom' (Luke 4:16), this Saturday he again entered the synagogue at Nazareth, the place where he had lived since the Holy Family returned from Egypt, and was given the book of Isaiah to read.

On this providential occasion, our Lord Jesus had the opportunity to read from the chapter where the arrival of the Messiah is spoken of. A messianic passage among many that contains the book of Isaiah.

After reading it, Jesus took seat. Not among the congregation like everyone else, but in the Preacher's chair, near the place where he had read the Isaiah scroll; and the people looked at him attentively, waiting to hear what the son of Joseph, a worker, would say about what he had read.

What Jesus said at that moment was something not expected by the congregation.

Jesus openly said that at that moment, this clear and explicit part of the book of Isaiah had been fulfilled. That is, Jesus applied to Himself the words of the reading, calling Himself THE MESSIAH before the entire congregation of the town where he had lived most of his life.

It is not part of today's reading, but the Scripture goes on to say that those who heard it were shocked to hear the son of a manual laborer with no theological education call Himself the Messiah, the Savior of Israel (Luke 4: 28).

We are also told that the mob tried to kill him, trying to push him off a high ground, but that he withdrew safely by 'walking through them' (Luke 4:29-30).

Jesus had touched, for the first time, the heart of official Judaism in a direct way.

It was his town; they knew his family. They knew Joseph, Mary and his brothers. They had seen him grow up, and they could not believe that this boy they had known, that although brilliant, but poor and without theological education, would be the Savior of Israel, and that He would restore the Kingdom of David.

This rejection of his own countrymen, increased to other higher spheres of the Judaism of that time. And it was this final rejection of the Messiah sent by God that brought about the final opening of this dispensation to the Gentiles of the world.