THE PREACHING OF JOHN THE BAPTIST 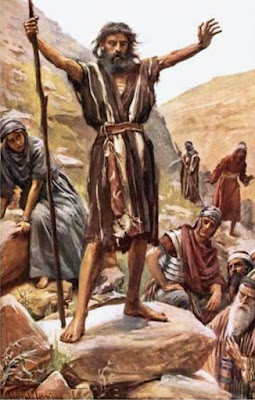 THE PREACHING OF JOHN THE BAPTIST

15As the people were in expectation, and all were questioning in their hearts concerning John, whether he might be the Christ, 16John answered them all, saying,

17His winnowing fork is in his hand, to clear his threshing floor and to gather the wheat into his barn, but the chaff he will burn with unquenchable fire.”

The people of Judea knew from their Scriptures and their traditions about the coming of the Messiah.

John the Baptist was reputed to be a genuine Man of God, a prophet, due to his strict ascetism and holiness in his personal life and preaching. Indeed, the verses from 10 to 14 of this chapter, testify about his ethics and morality. So, his preaching was heard and received by many. And he preached about the coming of the awaited Messiah, and what he said of Him, was clear and wondrous.

To the speculative minds of some of his followers and curious, that considered him probably to be the Messiah, John the Baptist said clearly, that he baptized with water, but that the one coming was ‘mightier than him’, confessing the higher status before GOD and men, of Lord Jesus; and he also said that while he only baptized with water for repentance, Jesus would baptize with Holy Spirit and fire.

Holy Spirit, because unlike John, Jesus would be able to transmit the Spirit of God into every repentant convert, a thing unheard of, never seen before in history.

But also said that He will baptize with Fire. Not the ‘Pentecostal’ fire which youth groups sing in parks, but the Fire of Eternal Damnation.

John compared the giving of the Spirit to the gathering of the wheat into the barn (Salvation); and the baptism of fire, with the burning of the chaff in eternal fire (Condemnation).

With this, John the Baptist made clear that the coming Messiah had an authority no other human had, to judge and save and condemn humanity accordingly. He made clear, that this Messiah had full authority on behalf of GOD the Father, to act in his Name at will. And that himself, was not even worthy of touching his sandals.