THE MINISTRY OF JOHN THE BAPTIST 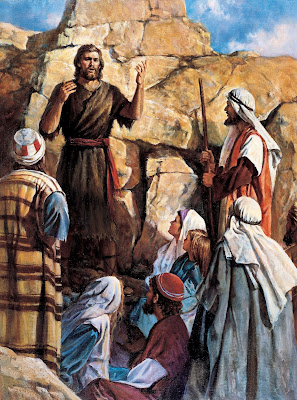 1In the fifteenth year of the reign of Tiberius Caesar, Pontius Pilate being governor of Judea, and Herod being tetrarch of Galilee, and his brother Philip tetrarch of the region of Ituraea and Trachonitis, and Lysanias tetrarch of Abilene, 2during the high priesthood of Annas and Caiaphas,

the word of God came to John the son of Zechariah in the wilderness.

3And he went into all the region around the Jordan, proclaiming a baptism of repentance for the forgiveness of sins.

4As it is written in the book of the words of Isaiah the prophet,

“The voice of one crying in the wilderness:

‘Prepare the way of the Lord,

5Every valley shall be filled,

and every mountain and hill shall be made low,

and the crooked shall become straight,

and the rough places shall become level ways,

6and all flesh shall see the salvation of God.’”

Luke is well known for his own investigation of the biographical data of the life of our Lord (Luke 1:1-4); and in this case, he starts the ministry of John the Baptist by giving us the exact time period when this supernatural event took place, mentioning the year in which the Roman Emperor reigned, 29CE; and the subsequent leaders in the world that Jesus and John lived, being Pontius Pilate governor of Judea, and the tetrarchies of Herod Antipas, his brother Phillip, and the Greek Lysanias, during the Hight Priesthood of Annas and his son in law Caiaphas, in order to provide a credible historical frame to the story he is about to tell. It is plain clear that the author is trying to communicate a historical event and not a fable or tale.

By the story, we know John, the son of Zachariah and Elisabeth (Luke 1:5-17), was already living an austere life in the desert, south of Jerusalem, near the Jordan-Dead Sea region (Luke 3:2). He was full of the Holy Spirit before he was born, like other men of God before and after him (Jeremiah 1:5; Galatians 1:5). He was chosen and sanctified for the ministry he had ahead of him. But that year, the Holy Spirit moved John to an active ministry of repentance.

The text says that ‘The Word of God’ came to him. That is the idea of preaching the coming of the Messiah, and the calling of people to repentance and baptism, cleaning themselves of their sins in a visible manner, in order to be ready to receive the Messenger of God.

It has been said that this baptism was not the same as Christian baptism. That is undeniable by Scripture alone (Acts 19:4-5). But the difference was the person of our Lord Jesus. John’s Baptism was not in the Name of the Trinity, or even Jesus; and did not mark the New Birth of a believer, which is essential; but otherwise, it was similar to it. An aspiration to a pure life towards GOD (1Peter 3:21); and it is the precursor of our modern baptism in water and by immersion of believing adults.

John’s ministry was an act of mercy from the Father, who sent a messenger to prepare the people for the coming of the Messiah, our Lord JESUS CHRIST.

John came living an ascetic and holy life, preaching openly about holiness and the coming of Jesus, in order that the people, in their limited knowledge, could at least recognize in John a true prophet, and listen to his call of repentance, and be ready to the words of Jesus.

That is how it was fulfilled in John’s ministry the prophecy of Isaiah 40:3-5.

The Grace of God was active prior to the appearance of the Son of God.