JESUS AND THE DOCTORS OF THE LAW 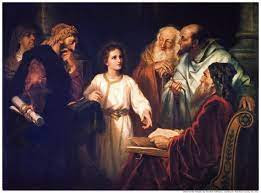 JESUS AND THE DOCTORS OF THE LAW

41Now his parents went to Jerusalem every year at the Feast of the Passover.

42And when he was twelve years old, they went up according to custom. 43And when the feast was ended, as they were returning, the boy Jesus stayed behind in Jerusalem. His parents did not know it, 44but supposing him to be in the group they went a day’s journey, but then they began to search for him among their relatives and acquaintances, 45and when they did not find him, they returned to Jerusalem, searching for him.

46After three days they found him in the temple, sitting among the teachers, listening to them and asking them questions. 47And all who heard him were amazed at his understanding and his answers.

48And when his parents saw him, they were astonished. And his mother said to him, “Son, why have you treated us so? Behold, your father and I have been searching for you in great distress.”

49And he said to them, “Why were you looking for me? Did you not know that I must be in my Father’s house?” 50And they did not understand the saying that he spoke to them.

51And he went down with them and came to Nazareth and was submissive to them. And his mother treasured up all these things in her heart.

52And Jesus increased in wisdom and in stature and in favor with God and man.

This was possibly the first time Lord Jesus was taken to Jerusalem in Passover for training for his coming adulthood. He could have been in Jerusalem before, during his early years until 11, but it was at 12 where Jewish males started to train in order to pass their ceremony of adulthood at 13. He needed to be familiar with the feasts, the offerings, the Torah, Prophets, Writings and Talmud.

But Jesus decided to remain in Jerusalem, at the Temple surroundings, learning more about the Torah than everyone else; so, Mary and Joseph went away, thinking Jesus may have been among other relatives in the caravan that they were part of; but only after a day passed, they noticed He was missing. They returned their steps trying to find Him, until they finally found Him in Jerusalem, three days after.

This is the third manifestation of his Messianic claim from childhood. And the third time Mary was impressed and intrigued with what was happening.

JESUS why were you looking for me? Didn’t you know I must be in my Father’s House?

Jesus had said this time in public and to Joseph and Mary, that GOD YHWH, under whose command a Temple was there, He was his Father. This is the first time Jesus is recorded to say this in the NT; and that indicated that He knew all along that He was the Son of God, the Messiah and that He pre-existed. Not like many scholars these days that sustain that Jesus learned who He was from John the Baptist and then He started to realize by Himself in a very human way, that He had a mission. That is wrong. Lord JESUS knew all along who He was. And called God ‘Father’ and claiming his Temple as His House in the condition of being a Son.

But not only this, He was debating with Doctors of the Law. Theologians, who were marveled at the amount of knowledge Jesus had, not only from the Tanakh, but also in the insight of them. Being Jesus 12 and the average Doctor over 40 years old.

Joseph and Mary knew Jesus was a miracle, but nevertheless, Mary still ponder the length, how far, how marvelous was that child she gave birth, Jesus of Nazareth.

As a human, Jesus grew in knowledge.

As a trades man, Jesus grew in strength.

In self-sacrifice, Jesus won respect and love from neighbors.

As a holy man, He grew in the love of his Father.

BUT as DIVINE, He knew everything, and awaited in silence, the fulfilment of his mission. The reason He came to Earth for. To die on the cross for our salvation.