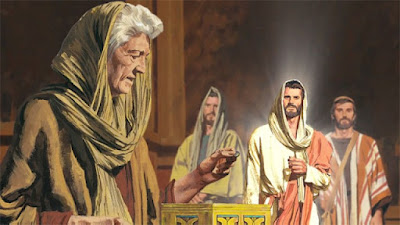 41And he sat down opposite the treasury and watched the people putting money into the offering box.

Many rich people put in large sums. 42And a poor widow came and put in two small copper coins, which make a penny.

43And he called his disciples to him and said to them, “Truly, I say to you, this poor widow has put in more than all those who are contributing to the offering box. 44For they all contributed out of their abundance, but she out of her poverty has put in everything she had, all she had to live on.”

On this occasion, after preaching in the Temple, Lord Jesus stood watching the pilgrims and worshippers put their offerings in the coffers placed outside the Temple, especially with the intent to collect voluntary alms giving (Not tithes or Corban), judging the hearts of the ones passing by.

Many put large amounts of Temple money, already exchanged from the Roman currency into shekels, and probably made a loud noise as the coins fell down the ‘trumpet like’ containers, calling attention to themselves. The louder the noise, the more they had given, and the more respect and honor they received from those around them.

Suddenly, an elderly woman, a widow. Came an made a deposit which made hardly any noise.

Probably nobody noticed her. Her poverty in a male dominated society, must have been obvious from her dress. But Lord Jesus did notice her.

Our Lord saw the hearts of men. And He considered how all the big offerings were given for the same reason He condemned those who wore large liturgical robes, charged money for prayers and read long boring written prayers for many things as they were requested by the worshippers. Vanity.

But while rich men made loud offerings, either for vanity to be seen by others, or simply out of generosity; this widow had given out of love.

A poor widow in those days, could not afford to be ‘generous’, let alone be seen in her poverty. It brough shame to most. She needed to rely either in the maintenance offered by her offspring, or from the alms of others.  That the evangelist mentions that she was a ‘widow’, does not only mean that her husband had died, but that she was in need by missing her material sustainer and moral support, her husband.

Even though she may have children, she could not afford to ‘give away’ voluntary offerings that the Law did not request. But she did.

The old lady had, out of love and devotion, voluntarily given for the maintenance of the House of God, all she had to live at the moment. She trusted totally in her GOD. She knew that God would see for her, because she had given not to pleasure or vice, or greed to collect interest on loan; but she had given happily to the priests what they needed to continue on with their daily worship of our Heavenly Father.

Lord JESUS pointed out not the giving, but the heart behind it.

All other men had given from what they could spare. Mostly to be seen by others, and a minority out of devotion and generosity, but none of that meant a deprivation of something, but was money that otherwise they could waste in other things (v.44), but rightly they gave it to the Temple service.

But that widow, had given, out of faith and love.

FAITH, because she fully believed and trusted in GOD. And her action according to her faith, demonstrated that she totally relied with confidence in the God who can make money out or stones and fed the prophets in the dessert. She had put her life on the line, and demonstrated her honest belief.

In LOVE, because she loved God and his House. She fell love for God’s worship and the place of divine worship, so much, that she considered the Temple of God more valuable than her own life. So, she preferred to give every thing she had, with total detachment in love.

Lord JESUS wanted to demonstrate his apostles, that it is more valuable in the eyes of God, the intensions of the heart than actions themselves.

It is not big offerings, big buildings, big campaigns, or luxurious churches or robes or pomp that God values, but the intentions behind it all.

If anything is given by any other reason that is not born from Faith and Love, it is worth no more than the material worth. Certainly, God is just, and will reward every man that does anything for Him, even if his heart and intensions are not the best (Matthew 10:42). But whoever does any thing for Him or his intensions, out of faith and love, will be rewarded, not only for the material, but for the detachment, love, faith and trust they have demonstrated in doing what they did, and will receive the Crown of Glory that await the ones who had given everything for God’s Glory (1Corinthians 9:25; 2Timothy 4:8).