SIGNS OF THE END 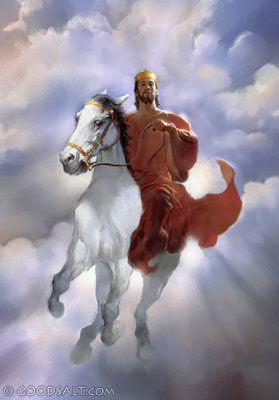 SIGNS OF THE END

24“But in those days, after that tribulation,

the sun will be darkened, and the moon will not give its light,

25and the stars will be falling from heaven, and the powers in the heavens will be shaken.

26And then they will see the Son of Man coming in clouds with great power and glory.

27And then he will send out the angels and gather his elect from the four winds, from the ends of the earth to the ends of heaven.

28“From the fig tree learn its lesson: as soon as its branch becomes tender and puts out its leaves, you know that summer is near. 29So also, when you see these things taking place, you know that he is near, at the very gates.

32“But concerning that day or that hour, no one knows, not even the angels in heaven, nor the Son, but only the Father.

This narrative is mentioned also in the gospels of Matthew (Mt 24) and Luke (Lk 21), and depending on the gospel, it focuses in the two aspects of the prophecy. One, the Immediate, that speaks of the initial persecution of Christians in Judea and the later destruction of Jerusalem by Titus (Lk 21); and the second aspect, the signs of the Second Coming of Jesus (Mt 24, Mk 13); and it is totally omitted in John’s.

In this gospel, Lord Jesus warns all his disciples of the persecutions they will have to endure not only by Jews, but also Gentiles for the Name of Jesus (v.9-10); which by itself creates a bigger historical margin that surpasses the Roman destruction of the city in the year 70 (The aspect that Luke concentrates on).

Jesus also warns of the natural instability and the political problems that will come upon the planet during this time, like natural disasters, hunger, and wars (v.8). This is another sign that Jesus is speaking about a time beyond the year 70, and talks about the signs of his return.

From verse 11, the prophecy stars diverting into a historical immediate aspect, and a scatological posterior aspect, about the return of Jesus, by warning all of his followers (This is clear since the circumstances surpass the conditions of the first century, like the gospel preached to the whole world, or Christians being brought before ‘kings’) of a ferocious persecution of Christians, where even relatives will give each other to death (v.11-13).

Jesus speaks of the ‘Abomination’ that will desecrate the Temple prophesied by Daniel (Mark 13:14; Matthew 24:15; Luke 21:20). He warns that those present at that time, should run away because a great tribulation has come to Judea (v.14-18). The mention of Judea and not only Jerusalem, speaks of a general war, and that took place in the year 70CE, when Roman General Titus and his lieutenant Tiberius, won the first Jewish-Roman war against Jewish generals John, Eleazar and Simon; and desecrated and then destroyed the Temple in the middle of a fight.

The problem here is that Daniel does not speak about Titus’s time, but if we read the prophecy of Daniel (Daniel 11:31), he is clearly referring to Antiochus Epiphanes and the pagan sacrificed he offered to Zeus inside the Temple during the Maccabean times. However, Daniel’s words also carry a further prophetic message, not accomplished in the times of the Maccabean revolt (Daniel 11:36-37), but later engage again with the historical Greeks. Therefore, the mention of ‘Daniel’s desolation’ by Lord Jesus, not fulfilled in Titus, must have a different time period than the year 70CE.

Now the words of Jesus pass the time of the Roman-Jewish conflict, and starts dealing clearly with the scatological signs of his return (v.19-27)

If the ‘Abomination of Daniel’ was not fulfilled during Titus’s time, Jesus must be making a reference to a third temple not been built yet. And the abomination fulfilment that Daniel spoke about, must be referring to a desecration of that Temple by the Antichrist (See Daniel 11:36-37), the man who exalts himself above God and claims worship for himself (Dn11:37; 2Thes 2:4). And the Lord says that when this happens, there will be such a tribulation, like there was never one like that before, neither will be.

Jesus continues on about the appearance of false messiahs and people who will falsely proclaim Jesus’s return or will claim to be our Lord Himself. But He gives us the guarantee that these days will be cut short so that the faithful believers will remain strong in the middle of these adversities (v.20).

Finally, he mentions the natural manifestations of destruction that will fall immediately before his Parousia. Suddenly, LORD JESUS CHRIST will appear with his host of Angels, and collect his chosen from the whole world, dead and alive; making clear that there is not secret rapture or return in two chapters. At the time of the last trumpet (1Cor 15:52) the dead in Christ will resurrect, and the ones alive will be changed and taken up to the air to meet Jesus, and will return together with his angels to Earth to start the Millennium. That is the correct time of the ‘rapture’, not before, and certainly not before the Great Tribulation.

In verses 28 to 32 Lord Jesus prevents us to be watchful of the signs before his coming (The desolation, the wars, hungers and natural disasters) and be ready for it. Then closes his words by telling us that the time and exact day, nobody knows, not even Himself, but only the FATHER in Heaven (v.32).

This is a clear teaching of the monarchial nature of the Trinity, where the Son and the Holy Spirit are eternally subjected to the Father, even when all of them are divine in nature.