LEGITIMACY IN THE LAST DAYS 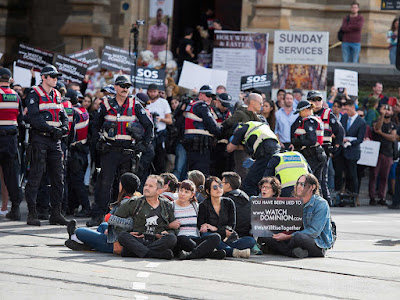 LEGALITY IN THE LAST DAYS

I remember a few years ago, when I was completing the Bachelor degree in Theology, how in Ethics class, the good teacher and students discussed how to act morally in times of adverse circumstances.

It surprised me how all of them had a problem in hiding the truth in front of enemies, even if it was to save other fellow Christians, thinking it was sinful, because it was a lie.

Later I realized that being Australians a society that has never suffered dictatorships, invasion or a high criminality rate, where the law enforcement agencies are totally corrupt; they have never in real life encountered themselves in a situation where they had to lie to save innocent people from an unjust oppression or even death.

There are many examples in the Bible where ‘correctness’ was left out in order to save lives.

Abraham lied twice about Sarah being his wife in order not to be killed, by saying that she was only his sister (Genesis 12:12-13; 20:1-2). Of course, GOD did not approve that, but the story creates an antecedent of the circumstances that explain the action; and Isaac did the same thing years after (Genesis 26:7).

However, there are other stories where lying and deceit was not condemned but seem favorable in God’s cause.

That was the case of Rahab, who actively lied to save the Jewish spies in order to be spared from death (Joshua 2:1-7).

The case where Moses was hidden and sent away to be saved from the King’s order to kill all Hebrew male children (Exodus 1:16, 2:4). The King’s daughter who lied and took the Hebrew child as her own and educated him as an Egyptian (Exodus 2:5-10). And even the Egyptian nurses who disobeyed Pharaoh’s order to kill Hebrew babes and were recipient of God’s blessings (Exodus 1:17, 20).

Even the NT gives us the story when the Church at Damascus led Apostle Paul out of the city in secret when zealous Jews were awaiting at the gates to kill him (Acts 9:23-25).

When Paul says that the ‘Invisible qualities of God are clearly seen through what has been made’  (Romans 1:20); he is speaking of Natural Law, encrypted in creation, in nature and in human common sense (Romans 2:15).

Being the God of all creation, the invisible deity has manifested his will through the natural order of things clearly seen in the natural world, and in the basic concept of good and evil inherent in human nature. This is so clear, that even if a man or woman would never be in contact with the gospel of salvation or any super natural knowledge of God, he or she will have enough ground to be judged on this natural basic knowledge, and the free application of the atonement of Lord Jesus if found ‘righteous’ in God’s judgement, attaining salvation, since Jesus also suffered for them on the cross.

We do not need super-natural manifestations to know that to kill innocent victims, rape, robbery, slavery, disobedience to our parents, adultery, pedophilia, sexual deviations, and many other things are morally wrong. All these principles which the Mosaic Law legislate about, are also plainly clear to uncontaminated human knowledge.  And among them, is the natural God given right of a human to dictate over his own body and soul.

The concept of social Law, and central government are also inherent to human nature, as also are its rights and limitations.

A centralized overall government, at any level, is there to regulate and enforce order in the intersocial relations of the components of a human group. This government has only right to legislate in our common life, and not into our personal internal lives whatsoever, as well as being conformed by elected members of the community, as a legal representation of the human group they rule.

Based on this, a central government can regulate rates, traffic, trade conditions, inheritance, and property laws; as well as to create a law enforcement group to stop and punish those who break those pre-agreed conditions. But it never has the right to legislate over intimate marital life, right to exist, private property, right to trade, to work, to self-defense, to inoculate or implant anything they were not born with, or to stomp over other rights that God has granted to every human on the planet.

When a government reflects the free choice of the people they govern, they are legitimate, as long as the people who put it in there want it. And all legislation they pass, as long as they do not contradict Natural Law and Revealed God’s Law in the Bible, are mandatory on every human, believer or not, under that government.

When a government places itself in power without the permission or against the desires of the people they pretend to govern, they are illegitimate. And even if it is freely elected, those laws that go against natural law and God’s revealed Law, become illegitimate, and are not to be obeyed by anyone, believer or not, under the danger of becoming immoral and sinful.

At that moment, in either of those two conditions, the biblical command to submit and obey civil government, stops, changing to resistance, passive and then self-protective (Acts 4:19; 5:29).

It is under these conditions when Christians are allowed to act in what in illegitimate law will be catalogued as ‘illegal’.

If we are commanded to act against God’s will or human nature, we are obligated not to follow and are free to hide the performance of our rights, even if that goes against ‘the law of the land’.

If we are commanded to kill innocent people, to leave our families, to confiscate private property, to stop people from working, to fire people for any reason that is not a breaking of a contact agreement, (Which also needs to be moral), or forced to inoculate any substance or mark our bodies with anything we are not born with; we are called to disobey, and present resistance by taking actions to avoid the fulfillment of these illegitimate commands, including the hiding and ‘illegitimately’ exercising our human rights.

IT is GOD, the ultimate Legislator of morality and legitimacy, not men, whoever they are. And our rights are protected by God Himself. To kill or not to kill, to obey or not to obey, to act or not to act, to live or die; are principles that no human person or society has rights over it, except God Himself, and we Christians have the guarantee of them, and to fight for them, as long as we are on this planet.