WHY DID GOD ALLOWED THE CONQUEST OF AMERICA? 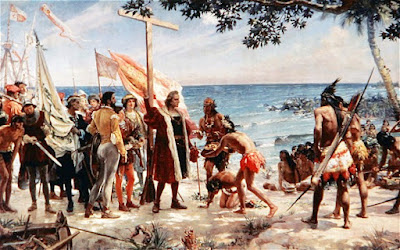 WHY DID GOD ALLOW THE CONQUEST OF AMERICA?

The vehicle of salvation is faith in Jesus Christ and repentance, nevertheless, it is our moral conduct the object of salvation, as much as love is the reason for it.

The intension of God in saving us, it has always been to produce a holy and perfect nation by nature, but free, which out of their own free will should choose to walk in the holiness and perfection of their creator, not out of convenience or fear, but through a natural inclination to justice and perfection, that naturally should qualify humans to live in God’s presence for eternity.

But since our nature is fallen and inclined to sinfulness due to the Adamic fall; we have become in need of the active grace of God working in us, to be able to choose freely to follow Jesus and submit to God’s will through him. It is due to this divine grace that we are born again as Children of God, and start a process of sanctification that at different degrees, according to the level of co-operation and depth of sinfulness, takes time on each individual differently.

Said simply like that, it sounds like salvation is more dependent on us that in any grace at all. But studying the soteriology of the Gospel, we understand that is GOD who gives the ‘will and the power” to be holy, but nevertheless, we need perfect holiness before we see God, and that is not ‘legally’ holy, but intrinsically (Philippians 2:13; 1Peter 1:15-16).

If God is holy, He rejects sin, imperfection and injustice; and He has always been like that, since eternity. For this reason, even though we live in a time of Grace, which a period of tolerance, the judgement is individual, and many times also communal, and it happens at different times for every one and every society.

To paint an example:

We know we are under the period of Grace and tolerance, until the Second Coming of Christ. That is in theory and dispensational. However, the judgement is really personal for everyone, because even though the ‘human race’ is under the coverage of grace until the end of the world; every human individual finishes his time personally when he or she dies, and that is when the time of repentance finishes for each person. The interim period is only an awaiting of sentence.

In the same manner, God can decide to end the period of repentance at any time within that dispensation of Grace, as Supreme Judge of the Universe, and start calling to account individuals, or groups of people, even nations (Romans 9:18; 11:7; Hebrews 12:17). That is why He sentenced Ananias and Saphira to death without time of repentance (Acts 5:5-6; 9-10), while He forgave others (2Corinthians 2:6-8).

For this reason, God punishes as well, pagans and other human groups that give themselves to satanism and institutionalized evil, like it happened in pre-European America.

The American continent is one of the most beautiful and rich places on the planet, if not the most. However, America is the only continent that has no natural inhabitants. Even Australia, the nearest reality to the American continent, had natural aboriginals before the Europeans arrived. But what is normally called ‘native Americans’, are not really native, but a migratory group from Asia, that settled from Alaska to the Patagonia before the European arrival. They were primitive, they developed in the Americans independently from Asia, and created two massive American empires, the Inca, and Aztec; but they were also pagan and satanic.

Americanist movements have created the myth of a happy Indian society before Western culture arrived to the continent, and only emphasize metallurgy, architecture, textile and other arts; but never mention that it was done out of slaves, human sacrifice, violence and torture of the worse kind. Even now, the massive killings of criminal syndicates from Mexico, chill the bones of Police officials, due to the sadism involved in the murders, but all that was inherited and was practiced by the Aztecs, long before.

In God’s eyes, the native Americans came to fulfill their limit before their Creator, and so God decided, like He did long ago, to destroy this people, and bring the knowledge of Christ into that continent.

For this reason, God allowed two Christian groups to arrive to the American continent initially. The Spanish and the English, both carrying the versions of Christianity they knew (Philippians 1:15-18).

Warfare, foreign and internal, pests and sickness, disseminated the savage blood thirsty native American nations, against warriors of Christian convictions, who lacked the sadism and blood hunger of the native population. And they brought together with them missionaries, and teachers and doctors, and scientist, that brough the salvific knowledge of Jesus Christ and his Gospel to the new land, and also the European civilization that made America the western world that it is today.

Every human being is imperfect and sinful.

The European conquerors were not exception, but as an overall analysis, they were far better than the previous evil population of the Americas. Until their natives converted and mixed their blood with the new comers.

Then they developed, and made war, motivated by the personal gain of particulars and the manipulation of Masonry, the same Masonry that today provokes revolutions, hunger, abortion, euthanasia and pandemics in the world, in order to ‘divide and conquer’, in the new continent; and once a single nation, the Spanish empire, became a dismantled group of minute little nations, each with their own leader and in burlesque sizes (El Salvador is 24,040 sq kilometers, a little smaller than Tasmania, and it has 12 provinces). Nevertheless, the European heritage, made possible the creation of Latin empires, like in Brazil and Mexico, but with the introduction of Communism, Masonry again infiltrated the cult to the satanic past, and to evoked an illusion of grandeur of the native savages seen these days as people worthy of admiration. The antithesis of all that is good and noble, and so they also destroyed this new born empires, until bring chaos and disunion to the new continent.

Communism erased from the history books all mention of a native Mexican Emperor. The fact that the Philippines were in fact a colony of Spanish Mexico. The erased the fact that El Yukon and Alaska were discovered by Peruvian Spanish before the Russians, and that Spanish Peru conquered Easter Island (Isla de Pascua) before Chile.

Nativist erased the knowledge and awareness that Americans were members of the Spanish Royal Court, and that Dukes (Duques) and Marqueses were Peruvian, Mexican, Argentinian and Brazilian; to be replaced by black slaves, and savage Indians, semi-naked and dresses up in feathers.

The American continent however, still has the blessing of God, and it has nowadays, received northern European influence, from Germany, Scandinavia and Eastern Europe. However, it is a continent in struggle though, from the God given right of native Indian Americans to exists in the land LORD YHWH gave them, and the right of Europeans to preserve their heritage, culturally and racially, without feeling guilty of dead ghosts nativist have created to darken the face of America.

Intermixing in order to whiten the American continent, and preservation of European as well as some native customs that do not contradict Christian principles, seem to be the only way to bring the whole continent to the place that rightfully belongs to them in the world.