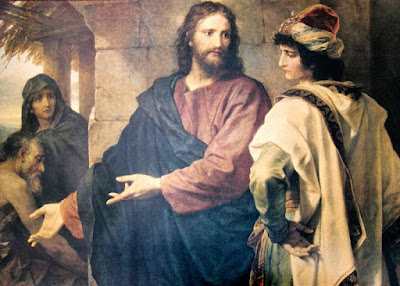 17And as he was setting out on his journey, a man ran up and knelt before him and asked him, “Good Teacher, what must I do to inherit eternal life?”

18And Jesus said to him, “Why do you call me good? No one is good except God alone.

19You know the commandments: ‘Do not murder, Do not commit adultery, Do not steal, Do not bear false witness, Do not defraud, Honor your father and mother.’”

20And he said to him, “Teacher, all these I have kept from my youth.”

21And Jesus, looking at him, loved him, and said to him, “You lack one thing: go, sell all that you have and give to the poor, and you will have treasure in heaven; and come, follow me.”

22Disheartened by the saying, he went away sorrowful, for he had great possessions.

23And Jesus looked around and said to his disciples, “How difficult it will be for those who have wealth to enter the kingdom of God!”

24And the disciples were amazed at his words.

But Jesus said to them again, “Children, how difficult it is to enter the kingdom of God!

25It is easier for a camel to go through the eye of a needle than for a rich person to enter the kingdom of God.”

26And they were exceedingly astonished, and said to him, “Then who can be saved?”

27Jesus looked at them and said, “With man it is impossible, but not with God. For all things are possible with God.”

28Peter began to say to him, “See, we have left everything and followed you.”

29Jesus said, “Truly, I say to you, there is no one who has left house or brothers or sisters or mother or father or children or lands, for my sake and for the gospel, 30who will not receive a hundredfold now in this time, houses and brothers and sisters and mothers and children and lands, with persecutions, and in the age to come eternal life.

31But many who are first will be last, and the last first.”

While Jesus was in his last trip to Jerusalem, before being crucified, a rich man came to him and acknowledging his ministry, knelt down in front of him, and asked him:

“GOOD TEACHER, what must I do to inherit eternal life?”

Jesus never denied the glory and majesty of his Father YHWH in Heaven. He is the source of the divinity, and that was in the mind of all Jews and followers he had. This time, Jesus asked the rich man:

Nobody is ‘good’ except GOD alone”

Jesus did not deny his divinity, but since his divinity was a secret to most, and specially for this man, Jesus answered the attention the rich man had given him, but calling him into considering that only the Divinity is perfect, and can only be called ‘Good’ as such. Every other being was imperfect in holiness and truth, except GOD. Since the rich man spoke to him like a human prophet, he answered as a human, submitting his human condition to the GOD of Heaven, they all knew, Lord YHWH.

After this, Lord Jesus told him the way to salvation according to the dispensation they were in before his atonement, so he quoted the Ten Commandments; in other words, he told him, “Live by the Law”.

Since the rich Jewish man answered that he was raised to fulfilled the Law, our Lord also opened for him, the true way to salvation, and invited him to leave everything he had, and follow him.

JESUS knows everything. He knew the rich man’s answer before he answered. But he asked him to leave us a lesson, and also to show him, his need of a savior, since he felt proud of fulfilling all the Law, and therefore, deserve salvation, like if he had held God in ransom.

As expected, the rich man, preferred this comfortable life, than to leave everything for Jesus; so he refused and went away. Jesus had proven his point. The man was lacking what it took to be saved, and certainly he did not fulfill all the Law as he thought, since the failed the command:

He loved his own wealth and life more than God.

Jesus pointed this out when he mentioned how hard, how demanding, will be for a man used to an easy life, to have his comfort altered for the Glory of God.

But when the apostles said then who will be saved, Lord Jesus answer the truth:

“IT IS IMPOSSIBLE FOR A MAN”

But with GOD it is possible.

He showed how to work our own salvation by our own forces, it will not be difficult, but impossible. But that through God’s intervention, through the atoning sacrifice Jesus was about to carry on next week, salvation will be made possible, because “All things are possible with GOD”.

When Peter, out of worry mentioned that they have done what he requested from the rich man, Jesus lovingly assured him that nobody leaving possessions or family for God’s sake, will really suffer loss. They will all receive multiple times in goods and love what they had left, referring to the support, material and emotional, gospel workers, like teachers, pastors, and missionaries get from the Christian community, and everyone else who works for God.

But two important things are here.

It must be noted that Jesus did not ask men to leave their partners. That is because the human couple, of a man and a woman, united under promise of marriage before GOD, is an indissoluble union, far stronger of what unites us to parents or children.

A man and a woman cannot be separated, and therefore, they are assumed to work together in unity in God’s service.

Another thing is that Lord Jesus did not exclude tribulation and persecutions in the Christian life, even in the middle of blessings. Persecutions and tribulations unite us with the suffering of Jesus on the Cross (Colossians 1:24), and therefore they should be expected always and received with joy and trust in God’s power.

But knowing that not everyone would endure the same or give of himself the same as any other, Lord Jesus warned, that at the end of days, many we considered important in the Church on earth, like popes, bishops, priests, pastors, apostles, and others, will end up on a lesser position in comparison with other menial servants of God, that gave up in faith and love every little thing they had for the Glory of God, and thus, they will end up in the highest places in God’s kingdom.