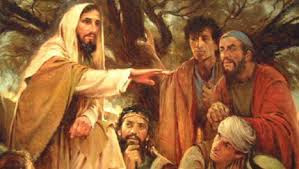 THE LAW OF DIVORCE

1And he left there and went to the region of Judea and beyond the Jordan, and crowds gathered to him again. And again, as was his custom, he taught them.

2And Pharisees came up and in order to test him asked, “Is it lawful for a man to divorce his wife?”

3He answered them, “What did Moses command you?”

4They said, “Moses allowed a man to write a certificate of divorce and to send her away.”

5And Jesus said to them, “Because of your hardness of heart he wrote you this commandment. 6But from the beginning of creation, ‘God made them male and female.’

7‘Therefore a man shall leave his father and mother and hold fast to his wife, 8and the two shall become one flesh.’ So, they are no longer two but one flesh. 9What therefore God has joined together, let not man separate.”

10And in the house the disciples asked him again about this matter.

Lord Jesus just returned from Galilee to the region of Judea, ready for his last missionary trip of his earthly life. Wanting to prolong his time, he did not enter immediately to Jerusalem, but passed to the eastern shore of the Jordan river, away from the city center and preach to the poor masses of the outskirts.

As usual, the Temple Jews came to tempt him, asking him hard questions that may drive him to contradict Scripture and thus, condemn him to death for heresy.

In that occasion they asked Jesus if it was ok to divorce your wife, in the manner Moses had prescribed in the Torah.

The fact that they considered a worthy question to ask, indicates that not everyone had the same opinion over the grounds of divorce. In fact, Judaism had just suffered Hellenization during the Greek invasions of Alexander and the subsequent reign of the Hasmonean dynasty, to later be taken over by Imperial Rome. These two western powers held similar laws about divorce than the western world today. Most of us would understand and accept the legal logic behind their legislation, but they differed in the way Jewish Law understood divorce.

Based on these differences, many ‘westernized’ Jews must have adopted the Greek and Roman view, and therefore betrayed Judaism. And so, they pushed Jesus to answer with the intension to find in him also fault to the Law’s principles.

But Jesus answered by asking them what Moses said in regards to divorce, and so they quoted that Moses allowed any discontent as legal reasons for marriage dissolution.

Jesus, without discrediting the work of Moses, expands in the explanation that the Law Giver ordered that because people were of hard spirits, incapable of sustaining altruistic ideals. Since they were primitive and insensitive in comparison with the time of Jesus, God allowed them to divorce for any reason, after a just financial settlement.

This story is partial, because it is the shortest gospel. But the same story gets narrated in Matthew 5:32 and 19:9; where our Lord cancels all reasons to break up a marriage, except through commitment of sexual immorality (πορνείᾳ).

JESUS recovered the essence of commitment. Marriage is a sacred commitment before God, where a couple promise to support each other sexually, physically and emotionally for a lifetime, and into that unit, they will bring children into the world, making a Godly family, the base of society. To destroy something as sacred as that, it was wrong. So, Jesus in his category of God, abolished the Mosaic regulations, and reverted the conditions of marriage to the original essence when God instituted it (Genesis1:28), so he removed all unworthy causals, leaving only one, sexual immorality, which can take different forms, especially infidelity, because it destroys the bond that holds together a man and a woman before God, and which was the initial reason of their commitment before the Creator.

Without fidelity, it cannot be marriage. And that is another reason how we know Christian marriage is monogamous. Because even in plural marriages, when a man is ‘married’ legally to more than one woman, the moment he sleeps with a second ‘wife’, and she cannot sleep with another man, ‘sexual immorality’ has occur. And if a man and a woman sleep with other partners, things not considered in polygamy, there also there will be ‘sexual immorality’.

Jesus’s example of marriage can only make sense within a monogamous relationship.