IS THE EPISTLE OF CLEMENT OF ROME PROOF OF PAPAL AUTHORITY? 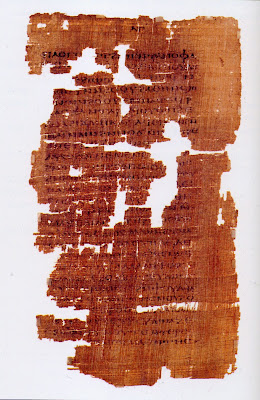 DOES THE LETTER OF CLEMENT I PROVE ROMAN SUPREMACY?

The epistle known as Clement to the Corinthians, which is attributed to Clement bishop of Rome, who, according to Irenaeus and Tertullian, was in office from the year 88 to 99, it is generally considered to be a strong proof of the universal primacy of the bishop of Rome by Catholic ecclesiastical historians.

No exact information can be collected directly from history.

All we know from Clement is from traditions, but no real proof of his existence can be found.

He is mention for the first time by Tertullian (160CE), who through ‘tradition’ said that he was the immediate successor of Peter in the leadership of Rome (1). However, Irenaeus of Lyons (130-185CE) mentions him quickly as being the third successor ‘from the apostles’ as bishop of Rome (2).

Eusebius of Caesarea who lived between 265 to 339, and through whose we have most of the information we have today, mentions a certain Jew convert called Hegesippus, who reputedly made the first list of bishops of Rome, around the middle of the second century where he mentions Clement as being third bishop of Rome (3), and by the time of Jerome, already in the 4th century, this idea that he existed, had become solid in the ecclesiastical tradition of the Church, even though he places Clement as the 4th bishop of Rome, and not the third or second (4).

By the time of the 15th century, his life was clearly shown as authentic by the Liber Pontificalis; a list of Roman Popes from Peter to Pius II (1458-1464CE), written in Latin by the Church of Rome, that places Clement as the 4th bishop of Rome from St Peter.

LETTER OF CLEMENT TO THE CORINTHIANS

Despite the discrepancies of the place of Clement as a Roman bishop (Tertullian says he was the second bishop of Rome; Ireneaus and Hegesippus, third; Jerome, fourth.), there seems to be enough traditional evidence of Clement, as being the third or fourth bishop of Rome from the apostolic times.

The letter called ‘Clement to the Corinthians’ or simply Clement I, it is an anonymous letter, from a series of different works attributed to him, from which only a First and Second letter (Clement I and Clement II), are the most relevant, and from this two, only Clement I is most likely to be genuine, and the second a forgery.

The epistle does not have a sender name, simply greets the “Church of God in Rome, to the Church of God in Corinth” (Clement 1, prologue). It contains 65 small chapters, in which the author advices the believers in Corinth to remember the teachings of the apostles, specially of St Paul, and encourages to stop their divisions, and submit to their leaders, as God wants unity and order.

THE POINT OF ROMAN SUPREMACY

Regardless of the author, the point is made by Roman Catholicism, that because the Church of Rome wrote to the Church of Corinth in mainland Greece, presumably while Apostle John was still on Earth, this letter is proof of the universal authority of the church of Rome in virtue of Peter.

The argument has two main points:

“Receive our counsel, and ye shall have no occasion of regret… but if certain persons should be disobedient unto the words spoken by Him through us, let them understand that they will entangle themselves in no slight transgression and danger” (1Clement 58:2-59:1)

This is taken as claim of the authority of Clement over the church of Corinth, and by extension, over the whole universal church.

As the time is contemporary to Apostle John, who is assumed to have lived in Ephesus, a city closer to Corinth than Rome, it is said that Clement, as successor of Peter, enjoyed a higher authority than John, and that is why the church at Corinth came to Clement for guidance instead of John the apostle.

1 – The letter is addressed to the whole church of Corinth in general, and the topic is the dispute against some Presbyters, who also are called Bishops interchangeably, the same way it is done in the NT

There is no claim from the letter itself, that the author was any more than a Presbyter-Bishop, one of many from the Church in Rome. The only claim that he was a monarchical ‘Bishop’ like the ones that appeared much later, it is made by later sources, like Eusebius and Jerome, based on ‘tradition’, since not even Tertullian or Irenaeus claim Clement to be more than a ‘bishop-presbyter’, third or second from the Apostles; and especially considering as it is accepted that Peter left Linus and Cletus as ‘bishops’ of Rome, due to the large population.

Further, there is no mention of a single ‘bishop’ in Corinth, since all references are made to the ‘presbyters’ or ‘bishops’ as being all from the same rank, above only to the deacons (1Clement 42:4-5; 44:2,4). This would justify the intervention of Clement or any other great leader of the Church since it is exactly the lack of a central authority which caused the disputes in Corinth, thing that would have never happened if there would have been a single Bishop over the city.

The whole argument of Clement is to quote bible passages from the Old and New Testaments, to compel the Christians at Corinth to do the right thing, by “listening to the Lord’s advice and repent” (1Clement 56:16; 57:1).

His call to listen to God through him, and to obey his call, is not claimed to come from his own authority, since at no moment he claims personal authority or status; but to listen his advice done according to the will of God from the Scriptures he quotes.

2 – The epistle, apart from the fact that it describes the Jewish temple sacrifices as if they were still in existence (1Clement 32:2; 41:2) which has caused some to assumed that it must have been written before 70 CE; the majority of scholars consider the letter to have been written around the year 96CE (5), specially considering that Clement is assumed to have been bishop in Rome from the years 88 to 99 CE.

At this time, apostle John was imprisoned and isolated in Patmos from 95 to 98-100CE.

3 – Exists the third possibility, that whoever wrote this epistle, was over claiming an authority that he did not have, by saying that whoever wrote it, was ‘speaking in God’s Name’. This would be the immediate conclusion if some other non-Roman bishop would have made the same claim; but Papal tradition has assumed the claim of ‘speaking in God’s Name’ to be correct, even though is anonymous, and there is nothing, apart from blind tradition, that may prove that claim to be correct.

Clement’s letter to the Corinthians is an anonymous epistle coming from the Church of Rome, from a bishop assumed to be Clement of Rome by later tradition, who exercised the position of a single Bishop in Rome, in a time of no monarchical episcopacy, and who claims no personal authority over the Church in Corinth, save to have spoken according to what they both churches considered to be Scripture.

There is no claim of personal or ‘papal authority’ in the letter, and it is addressed to a presbyterial system church, without a supreme authority, as fraternal support of the highly considered Church of Rome for being in the Empire’s capital, to the known church of Corinth.

No claim was made to Apostle John for being imprisoned at Patmos or dead at the time.

It is ridiculous to think that any Christian would have the arrogance to claim more authority than one of the Apostles of the Lamb.

Finally, the Epistle was rejected from the Christian canon, due to the senseless fantasies it contains, like the story about the Phoenix, the mythological bird who “lives for 500 years and resurrects from the fire” as Clements teaches as truth in his letter (1Clement 25:1-5), and many other words of Jesus that cannot be found in any Gospel.