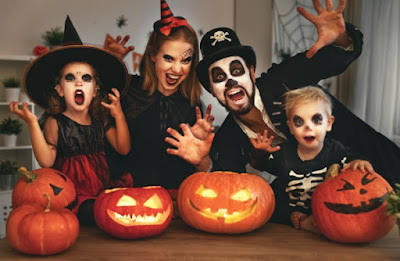 In modern times it has become a custom to let children dress up as monsters, vampires or other kind of sinister creature, and go from door to door asking for money or any present under the saying of “Trick or Treat”, in the public celebration called ‘Halloween’ on the 31st of October, every year.

Since children are the main protagonists of this celebration, it is generally accepted as being an inoffensive festival, and to oppose to it, brings general condemnation from the vast majority who follow this festival.

When Christianity arrived in northern Europe, it tried to change this satanic custom by establishing the celebration of the ‘Evening of All Saints’ Day, on the 31st of October, day of the pagan celebration, before the actual Christian day of All Saints celebration on the 1st of November. The new ‘Christian’ festival of ‘All Hallows Eve’, was adopted, and is where the word ‘Halloween’ derives from. (2)

ORIGEN OF THE PUMPKIN

Later in history, the pagan Irish tradition of a man called ‘Jack’ who made a pact with Satan, and who later became a vagrant condemned soul that carried a carved pumpkin with candle inside to see where he was going through the world, became adopted into the Halloween celebration. However, the custom to carve pumpkins and set them up with candles inside, pre-dates this story, bringing us to the pagan Druids, who represented the souls of their dead into these artefacts who were invoked to share with them in their celebration. (3)

In the 18th century, in the United States, with the rebirth of paganism, groups who try to eradicate Christianity from society, revived this old pagan festival and added more magical, and darker meaning into it, turning it into a proper satanic festival.

Children were offered to Satan, and were encouraged to dress up as monsters, vampires, witches and warlocks, or any other satanic figure, even adopting new evil characters like ‘Chucky’ or ‘Anabelle’, the demon possessed toys of the horror movies with the same names, in order to familiarize small children with the entities of Hell.

The offer of ‘Trick or Treat’ was told to be said, which in reality is an ancient magical spell that Irish witches used to say asking for presents for their Samhain festival under the threat of casting a curse if you refuse. (4)

During these celebrations, all satanic covens meet up and offer animals, food and even human sacrifices to Satan, promoting the decay of the world.

Being Halloween from the very beginning a satanic festival, Christians cannot possibly be part of it, or support it in any way.

The Children of God are not allowed to share in any demonic celebration, but instead to worship the true God from Heaven through Lord JESUS CHRIST, who destroyed the powers of Satan.

“You cannot drink the cup of the Lord and the cup of demons too; you cannot have a part in both the Lord’s table and the table of demons.”

True Christians do not ‘adopt’ pagan festivals into Christianity. There is no point of convergence. And for this reason, Christians also reject the Mexican festivity of the death, or the Inca pagan festival of ‘Inti Raimi’ and all other forms of syncretism.

We are call to destroy the kingdom of Satan, with power and message of Christ, and not come into compromises with it of any kind. We are called to announce the Kingdom of Christ against this satanic celebration.

During Halloween, Christians should be in their churches, or worshipping God in their homes, teaching their children to love our Heavenly Father, and showing them the path of justice and light, instead of teaching them to accept darkness as normal, or being dancing and drinking with other adults as pagans do.

When pagan children come knocking on our doors, we open and speak to them about Jesus, the light of the world instead of giving in to the evil behind it all.

“The night is nearly over; the day has drawn near. So let us lay aside the deeds of darkness and put on the armor of light.”