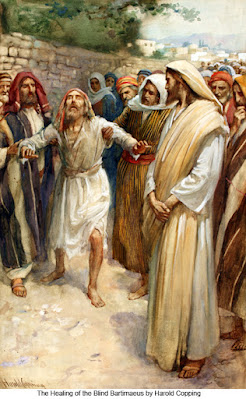 46And they came to Jericho.

And as he was leaving Jericho with his disciples and a great crowd, Bartimaeus, a blind beggar, the son of Timaeus, was sitting by the roadside. 47And when he heard that it was Jesus of Nazareth, he began to cry out and say, “Jesus, Son of David, have mercy on me!”

48And many rebuked him, telling him to be silent. But he cried out all the more, “Son of David, have mercy on me!”

49And Jesus stopped and said, “Call him.”

And they called the blind man, saying to him, “Take heart. Get up; he is calling you.” 50And throwing off his cloak, he sprang up and came to Jesus.

And the blind man said to him, “Rabbi, let me recover my sight.”

52And Jesus said to him, “Go your way; your faith has made you well.”

And immediately he recovered his sight and followed him on the way.

In the last days of our Lord Jesus Christ on Earth, He went back slowly towards his last entry into Jerusalem.

Coming from the east side of the Jordan, He went up shore the Dead Sea and entered for the last time into Jericho. After preaching there, and while He was leaving with a great multitude, a blind man, called Bartimaeus (Son of Timaeus in Aramaic), started calling Him for healing, as soon as he heard Jesus was nearby.

As it happens today, most healthy people dismissed the blind man’s shout, and tried to stop him from causing disturbance. They were concentrated in their own lives, and they did not care in the majority, for the misery of a blind beggar.

But the Son of Timaeus did not give up, but instead he shouted even louder.

When Jesus finally called him, suddenly the selfish crowd encouraged him to come forward, since now, the Teacher Himself had decided to listen to the beggar. Suddenly, Bartimaeus became a celebrity.

As soon as he asked Jesus to heal him, our Lord healed him immediately without any effort or physical sign, because as He Himself said it, it was Bartimaeus’ s faith which deserved such great blessing.

Bartimaeus recovered immediately his eye sight, and confirmed in his faith, started to follow Lord Jesus to his final destiny as a human.